Korkmaz, playing for the Turkish National Team, was ejected late in a game against Georgia then attacked by three players on the way back to the locker room 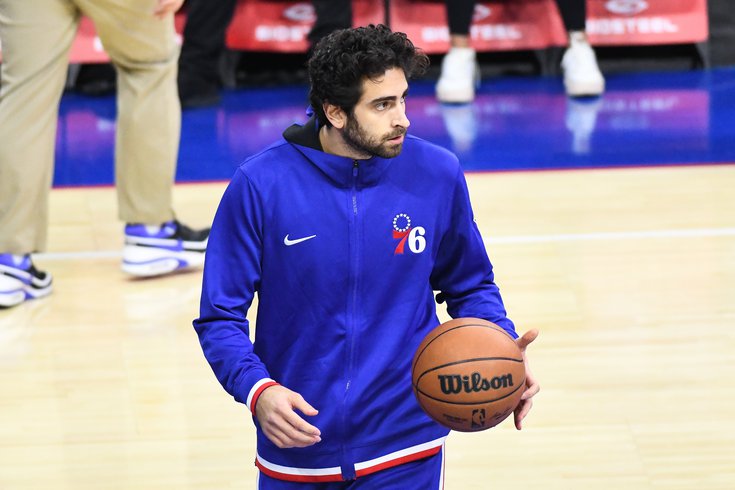 Sixers forward Furkan Korkmaz during warmups against the Detroit Pistons on October 28, 2021.

A summer EuroBasket game between Turkey and Georgia on Sunday got heated, leading to the ejection of Furkan Korkmaz and later an alleged attack on the Sixers forward by Georgian players in the tunnels.

The inciting incident was a foul on Korkmaz, playing for the Turkish National Team, late in the fourth quarter when Georgia's Duda Sanadze went up to block his dunk attempt.

The two exchanged words after the play,  butted heads, and had to be separated. They were ejected from the game immediately by officials, per the New York Post.

Furkan Korkmaz is getting into it with a Georgian player:

Fans are throwing cups onto the court.

The confrontation, however, reportedly carried over into the tunnels, where Korkmaz was attacked by three Georgian players on the way back to the locker room, per Europe's BasketNews. According to Turkish basketball reporter Ismail Senol, the group consisted of Sanadze and non-roster players Tornike Shengelia and Goga Bitadze.

"You saw a little part of what happened on the court," Korkmaz said (via BasketNews). "We got into each other face to face, and he started talking s*** to me. I'm not gonna let anyone talk s*** to my face.

"In the game, yeah. It's part of the game. You talk something and say something back, but the thing he said wasn't something I'll let slide. I reacted as a human being, as a player, and as a man."

On the incident in the tunnels, Korkmaz continued:

"When I was talking to the tunnel, our conditioning guy was with me. As soon as we walked out of the tunnel and were trying to reach the locker room, I saw three Georgian players alongside two security guys running at us. We started throwing punches at each other. That's basically what happened.

"It was like a street fight. There was no talk or conversation. People just came at us and were trying to attack us. Of course, we reacted and tried to defend ourselves – exactly what we are going to do as men. I also think it's a security problem. But I don't know if it's a security problem or if they just showed tolerance to their players." [BasketNews]

Georgia, playing host in its capital of Tbilisi, went on to defeat Turkey 88-83 in double overtime. Turkey's head coach Ergin Ataman was also ejected in a separate incident, so assistant coach Hakan Demir touched on the matter postgame, while Turkish Federation vice president Omer Onan threatened to have the team leave the tournament if FIBA didn't investigate.

"There was a basketball game with two overtimes on the court. Sometimes we played well and sometimes Georgia played well, but after our player, Furkan Korkmaz, was disqualified, three opposing team players attacked him in the corridors, while security guards attacked our player and our trainer. We came here to play basketball, not box. Therefore, we are very disturbed by the security weakness experienced today. We will follow up on this issue as well." [EuroHoops.net]

Turkey also protested the result of the game over a timekeeping dispute, but FIBA dismissed that case. The governing body is, however, looking into the alleged altercation involving Korkmaz and the Georgian players.

"Regarding the allegations from both federations in relation to actions in the team areas of the venue, involving players and delegation members from both teams, an investigation is currently ongoing," FIBA's statement read. "Once the investigation is concluded, the competent FIBA bodies will decide on any applicable disciplinary measures."

Turkey returned home to continue play on Tuesday and beat Belgium 78-63. Korkmaz, who will be entering his sixth season with the Sixers, scored 16 points on 6-of-12 shooting.