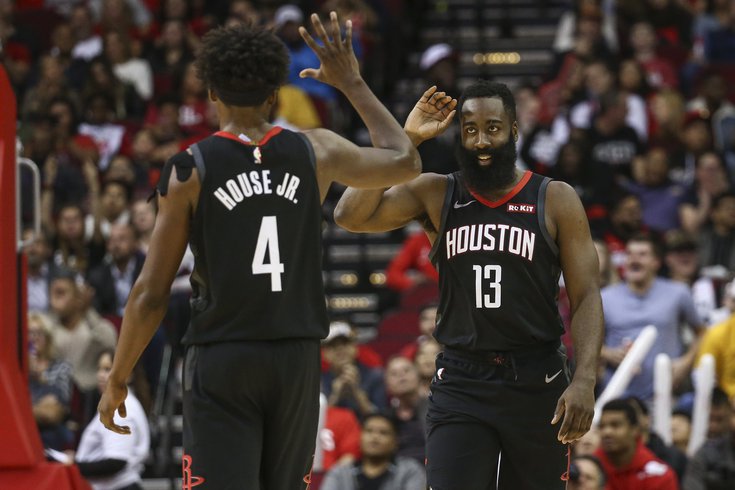 Danuel House Jr. and James Harden together during their shared time in Houston.

One of the funnier subplots of Philadelphia's 2022 offseason was the complaint that they were reassembling the Rockets teams Daryl Morey oversaw in Houston. I'm not sure if you noticed, but those Rockets teams were damn good, and achieved more/went further in that run than the Sixers have in their last two decades. There are worse teams to mine than the one Danuel House Jr. played on with James Harden a few years back.

Anyway, soapbox moment over. Let's take a look at how House might impact the Sixers this season.

The high ceiling outcome for House is probably not going to have anyone falling out of their seats with joy, but he was a legitimately helpful piece for the Jazz last season and often outplayed Royce O'Neale, who was dealt to Brooklyn for a first-round pick earlier this offseason. If he can duplicate that in a similarly sized role for the Sixers — House played about 20 minutes a night for Utah down the stretch — it will go a long way toward solidifying their bench.

On a team with one of the league's most impactful defenders last year, House's presence in the lineup was a huge indicator of whether the group could get stops or not. Utah's defense was 9.3 points better per 100 possessions whenever House played, the best mark of anyone on the team and in the 97th percentile of all NBA players last season, per Cleaning The Glass. He is by all accounts a real solid wing defender who can hang with a lot of guys manning the 2-4 spots in today's NBA.

Bringing House off the bench is part of a team-wide quest to stay solid for 48 minutes, and his versatility will be a big help to tie lineups together. You can use him against small, athletic wings if he's on the floor with bigger guys like P.J. Tucker, but he's strong enough to hold up burlier wings and some true "forwards" if he must. His experience across multiple schemes will help empower experimentation when Joel Embiid is off of the floor, with House proving able to play within switch-heavy schemes and in drop coverage across his stints in Houston and Utah. With Philadelphia hoping to play some more unique looks this year, including lineups with Tucker at center, a player like House will be crucial.

There have been a lot of jokes made about reuniting all the old Rockets players, but not every role player is cut out to play a role where they're essentially a piece of the Harden show (in this case, the Harden/Embiid show). Being able to stay ready for your shot opportunities as they come with few touches and on-ball time is not for everyone, and it's often hardest to keep that mental focus on defense, where many check out if they feel uninvolved in the gameplan on the other end. House has been a consistent spark of energy regardless of how a game unfolds around him, and he thrived playing next to a shot creator like Harden in Houston. It should be a pretty effortless fit for him here, and the Sixers have not been blessed with a lot of those over the years.

On offense, House will not be asked to do much more than make open threes. That will suit House just fine, and though I wouldn't intentionally draw up plays for him, he can also get you out of an offensive jam on occasion. House has a little bit of off-the-bounce game, and maybe the Sixers will get a surprisingly good year from him as a pull-up shooter — he canned 39.5 percent of his pull-up threes in his first year next to Harden in Houston, so dare to dream if you feel like an optimist.

(To be clear, I am not dreaming that dream. Take your catch-and-shoot success and be happy.)

It is not impossible that House ends up rotating into the starting and/or closing lineup from time to time, and at the very least, he's a guy with two-way ability you can feel comfortable with even if he gets thrown into the deep end in weird circumstances (e.g. a teammate fouling out). Still in his prime physical years, House should have plenty to offer.

I think the relief of writing about the "worst case" scenario for someone like House is that even a bad year would basically be no different from what they've gotten out of an assortment of other role players over the years. This is the franchise that traded a package of players (including Jahlil Okafor) and a 2019 second-round pick for Trevor Booker, talked up his value in the immediate aftermath of said deal, and then waived him two months later. The bar is on the floor.

If we're trying to invent a scenario where House is actively harmful to the team, I suppose it's one where he regresses from three and is asked to do too much on the defensive end as a result of the other pieces around him. House as a piece of your defensive chain is a good thing. House needing to be the pivotal guy on the floor is another story. There are also going to be some maddening cold stretches from deep, and while I ultimately think it's a good thing that he'll continue to shoot through them, I can't promise you're going to like them very much. House's shooting mechanics aren't pristine, with his shot often released as he's coming down from the top of his jump, which is a big reason why he has struggled to put together consistent results.

Maybe a legitimate concern you would have is less about House than the whole group — they're not exactly brimming with movement shooters, and while House can make some threes off movement, he's ultimately one of a bunch of guys on the roster who is better off being a pure standstill guy. There's certainly value to that, but you do run the risk of the team being a bit stagnant around the arc and ultra-reliant on the dynamism of the stars in the middle of the floor.

To really stretch this thing out, we could suggest that House is a bit of a live wire, as illustrated when we discussed him being a fiery personality during his time in Utah. Again, I ultimately think that's kind of a good thing for a group that has come out limp in too many games and has needed a bit of juice from the various role players throughout the roster. But an uncharitable viewer would say he's a bit of a loose cannon, and that can have unexpected consequences for a group of men that spends a metric ton of time together over the course of a season.

The Sixers aren't playing in a bubble inside the Disney World campus, so what's the worst that could happen?