Best case, worst case: Does PJ Tucker have enough left in the tank? 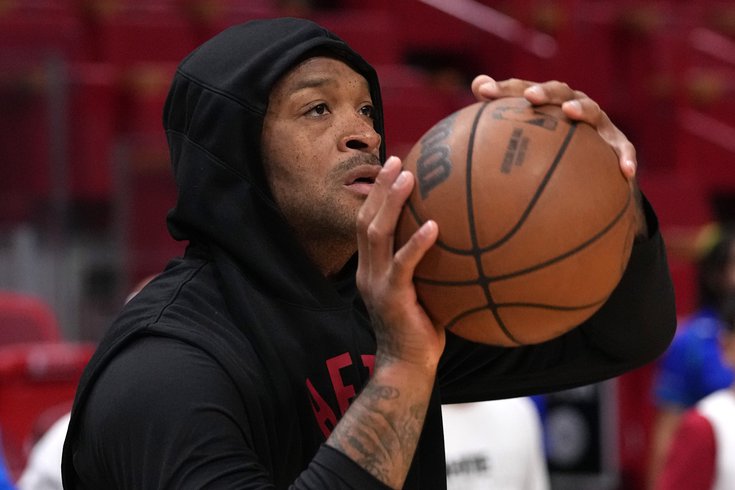 What will the Sixers be getting from PJ Tucker?

Is PJ Tucker one of the missing pieces to push the Sixers over the top, or a role player near the end of the road on a bloated contract? That's been the crux of the debate for a lot of this offseason, and I suspect that will continue throughout the 2022-23 campaign.

In all likelihood, it'll be neither of those outcomes, but let's take a look at what he may (or may not) bring this season.

I must have included the same Joel Embiid quote about Tucker in about 15 stories this year, so I’ll spare you another inclusion. But it’s clear to most inside and outside of the organization that Philadelphia needed to toughen up and fill the roster with playoff-caliber depth. Tucker’s age should not blind anyone to the fact that he has been an impactful player for good teams for quite some time.

The best part about acquiring Tucker is that he already has a track record of success playing alongside the exact player running their perimeter offense. He was the NBA’s leader in corner threes in every full season that he played with James Harden, pacing the league for three consecutive years. You won’t see him moonwalking on the baseline and manipulating defenders the way Danny Green did to get those shots, but Tucker will set up shop and force you to respect him. There is great power in that.

Having Tucker in that spot instead of someone like Matisse Thybulle is a difference maker for the guys operating in the middle of the floor. It’s more space for Harden to drive into after he turns the corner in a pick-and-roll. Embiid can’t be doubled from the weakside as easily if that decision means leaving a good shooter open there. Teams run out of good options as the ball swings around the perimeter out of a double team — if I’m the Sixers, I’d certainly take my chances with Tucker in the corner or Tyrese Maxey on the wing if teams load up to stop the Embiid/Harden combo in the middle of the floor.

Miami runs a different offense with different personnel than the Sixers, so I wouldn’t get your hopes up that Tucker will provide as much value doing other things on offense this year. But at the very least, he can provide occasional value as a cutter and is a big body as a screener, which should help free up their more dynamic ballhandlers. And he’s a pain in the ass on the offensive boards when he pursues them, which the Sixers found out the hard way in the second round.

Here’s what it all comes down to for me — if Tucker can credibly defend No. 1 assignments on the wing this season, as he has done throughout his career, I think that meaningfully changes their ceiling. Tucker being able to hold up on his own, or mostly on his own, has been one of the features of employing him over the last decade. And on a team that has some defensive questions left to answer, Tucker making life tough for at least one dangerous player per night helps simplify things for everybody else.

In a lot of cases, teams are going to want to get Tucker switched onto other assignments so their best players can attack somebody like Maxey or Harden. The good news for Philadelphia is that Tucker is capable of leaving his mark as an off-ball defender as well. His understanding of positioning, angles, and timing should help him age gracefully, and that intelligence/experience allows him to disrupt possessions and cause turnovers even if he never touches the ball himself. The Sixers did not make teams uncomfortable enough last season, and they’ve just added one of the masters of air space invasion and psychological warfare.

Bonus round: Tucker will likely get some reps at center this season, allowing the Sixers to (potentially) play five-out basketball while still keeping some defensive steel on the floor. He’s a player up for mostly anything on defense and fills a needed role on offense. Very hard to quibble with that.

I don’t think I’m delivering any breaking news here: PJ Tucker is 37 years old, and turns 38 years old in mid-May 2023. Modern athletes are playing (and playing well) longer than ever as sports science gives them the best understanding of their bodies possible, so Tucker could very well turn in another stellar season. But the track record for role players impacting teams deep into their 30s is, well, limited. And most of the guys who carve out meaningful roles or produce at that point were stars at their peak, some of them inner circle Hall of Famers.

Tucker is certainly not either of those things, helpful as he has been. It’s not as though he has one specific elite skill he can fall back on if age claims a harmful portion of his athleticism. His shooting has been slightly above average for his career, with Tucker’s high-efficiency season in Miami the big outlier. A down year from deep isn’t out of the question, and if that were combined with a lost step on defense, you feel a lot less rosy about the signing. He is at the age where you’re not going to expect a bounce-back year if he finds himself on the wrong part of the age curve and struggles this season.

Health obviously becomes a bigger concern this late in a player’s career. Tucker routinely played 80+ games in his early 30s, and he’s a tough SOB willing to play through bumps and bruises to help the team. That tendency may ultimately haunt the Sixers, though, who are now tasked with keeping him playoff ready while getting proper value out of their biggest free agent signing of the summer. Maybe Tucker is a true iron man, but maybe he’s like many other athletes who reach a certain point on the odometer. Trouble may be ahead.

When I hear things like the idea that Tucker will play some center, the basketball watcher in me is intrigued. The part of me that monitors workloads, however, is concerned. You’re already going to be asking a 37-year-old to play a sizable role, so I get nervous about the concept of Tucker needing to be the biggest guy on the floor, even situationally. I don’t doubt his ability to mix it up and the potential value he can provide there, but I do worry he’ll end up overextended in that spot, with young bigs the coach is reluctant to trust the only thing standing between him and that backup role.

A fall off for Tucker does not mean he has to be a complete shell of himself or suffer some sort of devastating injury, he may simply find it harder to get to spots and use his intelligence to make plays on a consistent basis. Age doesn’t always zap an athlete’s peak powers, but instead whittles away their ability to summon those day after day. Tucker having a strong performance against the elite wings of the world is still within his grasp, but doing it across a full series, let alone a Finals run, is another matter entirely. His value won’t come down to on-ball, one-on-one defense, but they will need him to be one of the guys (perhaps the guy if Thybulle remains unplayable on offense) who can get critical stops on the perimeter.

And maybe, with due respect to Tucker’s reputation as a worker and a character guy, he simply gets complacent this deep in his career. He was able to secure a nice paycheck after a long career of grinding and small-ish deals — at least by NBA standards — and he has a championship under his belt thanks to his stint in Milwaukee. Tucker would not be the first guy to rest on his laurels a bit in the final stretch of his career. We’re talking about a guy who had to cut his teeth in Israel, Ukraine, Germany, and other countries overseas just to get real consideration for an NBA job. Eventually, the appeal of the grind fades. The Sixers have to hope it hasn’t for Tucker quite yet.

Next to a sleeker wing, all of this might not matter. But with the Tucker/Harris combination sure to run into some hurdles this season, there will be questions about whether they can put together a true “best five” without shuffling the roster yet again. Even a diminished version of Tucker helps this group. He just might not help them enough to push them to the next level, or change the problems they need to overcome.