What adjustments can Sixers make heading into Game 2 vs. Heat? 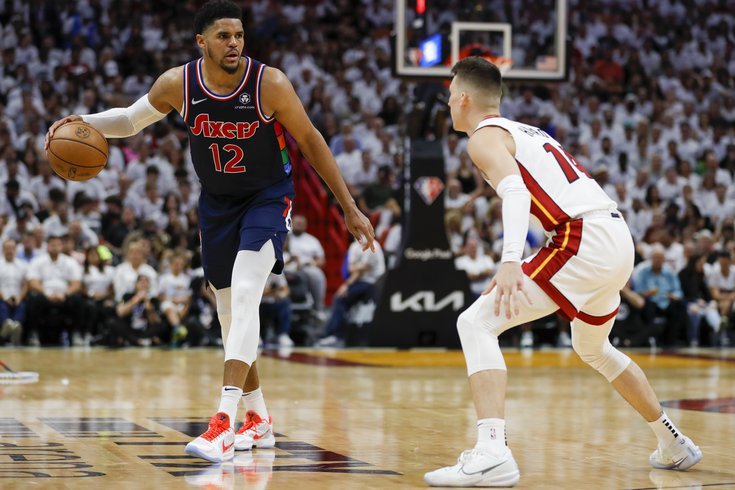 MIAMI — The difference between heading back to Philadelphia with a 2-0 deficit and arriving after securing a split is bigger than perhaps the Sixers would admit. Find a way to steal one in Florida, the thought goes, and you can potentially bring Joel Embiid back into a series that is there for the taking. There's less pressure for the big man to immediately be great, giving him time to figure how to once again play with a mask. Go down 2-0, and he has to play savior, putting him in a tough spot as a player and a person, potentially rushing back before he ought to see the floor again.

Getting Game 2 on Wednesday, then, is a pretty huge deal. Here's where I think Philly could stand to make changes, even as it (frequently) clashes with what the coach has said in Miami.

When Doc Rivers has been unhappy with the Sixers' offense in the playoffs, he has labeled their bad possessions "random," a word he says he uses to stand in for lexicon that is used around the league (unorganized, not executing, and so forth). And being "random" has definitely been a problem for the Sixers at times, though I want to zoom in on a point Rivers and I disagree on from Game 1.

If switch hunting comes at the cost of actually running plays, no disagreement from me. But for me, one of the easiest changes the Sixers could make is to alter the rotation in an effort to facilitate better Harden-driven possessions, to pummel bad defenders as much as humanly possible.

With Jimmy Butler struggling for long stretches on Monday, the Heat turned to Tyler Herro in a super-sub role to run the offense on a lot of important possessions, with several bench players on the floor for both teams. The Sixers were down just eight to open the fourth, pitting a lineup of Tyese Maxey, Shake Milton, Matisse Thybulle, Tobias Harris and Paul Reed against a group of Herro, Victor-Oladipo, Max Strus, Caleb Martin and Bam Adebayo. By the time Harden checked back into the game with 7:47 to play, Miami's lead had doubled to 16 points, and that was all she wrote.

According to Second Spectrum tracking data, Herro guarded either Harden or Harris for about 11 possessions in Game 1. The Sixers scored 15 points on those possessions, and the Harden/Harris combo shot a combined 60 percent from the field. Those numbers over the course of 48 minutes are an ass-kicking.

To meet Rivers in the middle some, going after Herro does not mean setting a screen for Harden, clearing out and standing around is a good possession. The key is the same as with any poor defender — you force them to stay involved in a play for as long and as much as possible:

In Game 6, we saw how impactful a simple change to the minutes distribution could be. Pulling Embiid earlier and playing Reed with a starter-heavy group gave the young backup big the best chance to succeed, and it worked best for the franchise player to boot, allowing him to have a sensational closeout game. The Sixers might do well to pull Harden early with the intent to bring him back into the game when he can have maximum impact.

Making that change would require a brief period of rest in the middle portion of second and fourth quarters, which is a dangerous game to play, but by that point you would assume the entirety of your "closing group" is all back on the floor to eat a couple of minutes for him.

Doc Rivers has made it abundantly clear that he's not letting the media or the public influence his decision to play DeAndre Jordan. I'm not expecting him to take a sip of coffee on Wednesday morning, pour over these notes and suddenly decide to go another way. But it has to be reiterated that the Sixers have not been good with Jordan on the floor at basically any point.

I am not a single-game plus/minus guy, but I put a lot of stock in on-court numbers over larger samples. With Jordan on the floor, the Sixers were outscored by 7.7 points per 100 possessions during the regular season. The only players who were worse in that department: Jaden Springer, Aaron Henry, Braxton Key, Myles Powell, and (gulp) Paul Millsap and Charles Bassey. The key difference is that Jordan played by far the most minutes of that group, and Jordan posted those minutes in the Harden era, unlike Bassey, whose last opportunity to play meaningful minutes was in the fall. We don't need to rely on a minuscule playoff sample to declare that Jordan can't hack it. On a bad Lakers team to start the season, Jordan posted by far the worst splits of any guy in the rotation — L.A. went from being pigs for slaughter (-12.3 pts per 100 possessions) to barely below water (-0.3) by simply not having Jordan on the floor.

So what is the plan? It starts, literally and figuratively, with Reed and the hope that he can simply minimize his foul damage if you surround him with better talent. Force Reed into a lot of bang-bang plays, and he's going to find himself in trouble more often than not. If you can keep him on the floor with that core four group of starters, the rest of the guys have the continuity to pass off assignments and put out fires so that Reed's strengths are highlighted and his weaknesses dulled. That's the basic premise behind starting him and hanging on for dear life. You wish you had something better, but this is what you have.

Going to a rookie out of Western Kentucky coming off of an injury after not playing regular minutes basically all season is, to put it lightly, nonsense. But playing Bassey is no more wild than expecting Jordan to rediscover his form at this point in his career and this point in the season. Bassey has the size to mix it up with Miami's bigs, and his weaknesses as a prospect don't fundamentally change how they've set up to play — he was basically a drop-only big at the college level, and Jordan certainly isn't coming up to the level on ball screens.

But here's where I'll come down a little bit: I'm less convinced the Sixers can play small and succeed in this series. They had success with it in the first half in their push to get back in the game, but you become reliant on Georges Niang to be both a defensive presence at the rim and a plus-rebounder. He is equally unqualified to do both of those things, his stonewalling of Jimmy Butler on Monday notwithstanding. Playing small is something different, but it's not necessarily something good.

Sometimes, this is the most important adjustment of all. One interesting wrinkle: the shooters and the head coach were not in agreement on their shot quality.

Danny Green: "I think we had a good amount of decent looks collectively, we just didn't make them. I hope we don't shoot that poorly again, we would expect that we wouldn't, we got to find ways to keep ourselves in rhythm. Just offensively being sharper, finding good spacing, some things we can adjust on, but we had some great looks."

Georges Niang: "I think we talked about it after the game, I don't know how many more games I'm going to go 0/7. I thought those are all pretty good looks, and I think a lot of guys got really good looks. It's a make or miss league they say, so you want them to go in. I would take those looks in a seven-game series over and over again."

Doc Rivers: "No, I said that last night, I liked them even less today. I just thought a lot of our looks were rushed. I thought the ball should have been there early, and it wasn't, and then it got there...analytically it's going to say we had great looks, everyone in that room knows those were not good looks."

Narrator: everyone in the room did not know those weren't good looks.

Once again, I'll come to see Rivers in the middle. The overall shot quality for their starting backcourt trended toward bad, Harden settling for plenty of step-back threes and Tyrese Maxey getting trigger-happy on some deep threes. You'd rather see Maxey aggressively pursuing his shot than not, though that means you're going to be living with some shots launched from the outskirts of Dade County.

The easiest way to ensure that Harden and Maxey are able to get higher-quality looks? Better spacing, and punishing Miami for sending multiple players at their ball-handlers. It was one of the things that jumped out about Harden's second half against the Heat, with Harden and Rivers both emphasizing the boxes and elbows approach from their opponent.

"The whole team, we got to get in our right spots," Rivers said. "We work on spacing every day, and we had we call it three-and-one is where we should be, and we're two-and-two the whole night in our spacing package. You do that, they're going to go elbows and boxes and you're playing against three guys every time you have the ball."

"We had our bigs in the dunker's spot too much because of breaking the press, but then when we tried to run the offense, our guards didn't call them up to run our offense."

Fact check: True. With Jordan camped out around the lane, this is the floor Harden has to attack:

Will a cleaner floor lead to cleaner results? Maybe not. But standing around and helping the Heat assemble a wall in the paint certainly ain't getting it done.