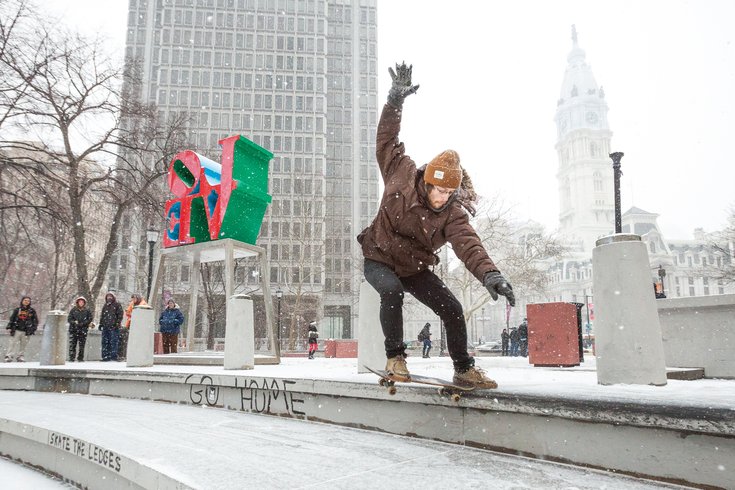 A group of dedicated skaters came out to get a few more hours in at Philadelphia's Love Park. Mayor Jim Kenney lifted more-than-decade-long ban on skateboarding, allowing skaters until February 16, 2016 to shred the legendary skate spot before renovations begin.

Philadelphia’s skateboarding community – a demographic with loose ties that match the sport’s free-form approach – will look to coalesce this month around a rebranding move that it hopes will help “make Philadelphia the most skateable city in the world.”

In an immediate sense, it centers around a name change – rebranding from “Franklin’s Paine Skatepark Fund” (FPSF) to SkatePhilly on Monday – and a full day of events to celebrate International Go Skateboarding Day on June 21.

In a bigger-picture sense, it’s about uniting in an effort to use the granite slabs that skate enthusiasts painstakingly gathered from Love Park, the erstwhile skating Mecca.

They hope to build a skate park in the city that, with the help of big-name sponsors, will incorporate many facets of the Center City spot.

The granite is being stored at an unnamed (to avoid theft) location in the city, and organizers say they didn’t send nearly as much to Sweden as some reports would have you believe.

Jesse Rendell, the son of the former mayor who’s heavily involved in skateboarding issues in the city, spoke to PhillyVoice this week about both efforts.

“Stories like this give people the opportunity to throw dirt on us. It fractures the community when people can say, ‘I told you the skate park was bulls***,” Rendell said.

“We don’t even have half a million pounds in salvage,” he continued. “The Sweden thing got everybody into a panic. It becomes easy for people to write you off, but we’re a group trying to do what we think is the right thing.”

Maintaining “we can all work together to create parks that everybody likes,” he detailed the yeoman-like effort to preserve Love Park granite for future use with a surface that Josh Nims, founder of the Philadelphia group, labeled “sacred.”

In the years leading up to Paine’s Park’s opening in May 2013, the group gelled around that common mission of seeing a $4 million project through to completion.

In the years since, that momentum faded and, in the words of Rendell, they’ve been “ham and egging it with volunteers” to work on “cool piecemeal projects that have an impact.”

“We’ll never have another Love Park, but we can have a park with the opportunity to do something really cool if we get them to buy in.” – Jesse Rendell

Those efforts have seen McCreesh and Granahan playgrounds join the city’s roster of seven or eight skate parks.

All the while, though, some in the community didn’t have a greater sense of the group’s direction. That’s what the rebranding efforts hope to change.

“With SkatePhilly, we want to make it something that’s a bit more all-inclusive, not that it wasn’t before, but we weren’t viewed as a movement,” Rendell said, noting that SkatePhilly will start with a social media push including posting videos from various sites and “becoming a resource” for the community.

They hope to replicate groups like Tree Philly and the Bicycle Coalition of Greater Philadelphia, which have been able to coalesce enthusiasts around shared goals.

“Those groups share a common passion and they can mobilize supporters who can work with Parks and Recreation and the city,” he said. “We’ve done OK with that through little relationships here and there. But we want to build something with momentum and support to keep going forward.”

Among the goals is replicating the city’s bike-trail system, linking all the city’s skate spots together in similar fashion to reinforce the thought that Philadelphia is already among the nation’s most skateable cities.

“I’m into this because I grew up with that skate/surf/snow culture. When I see someone do a 360 flip on a stair set, I think how bada** that is because I know how much went into that, how much of a part of their life it is,” he said. “I have a lot of respect for that. I know what it’s like for these kids and how there would be groups at each park where it’s their home base.”

As for the Love Park granite, Rendell said “the goal has always been to recreate as much of the famous skateable components as possible” and not to build a clone site, which would be impossible.

“We can’t create another Love Park, but we don’t really know what we can and can’t do yet,” he said.

“There will be a meaningful design phase. ‘Here’s all the granite we have, what can we do with it?’” he continued. “We’re not in this to do things that won’t appeal to as many people as possible. Hopefully, what we end up doing will appeal to everyone and not be some wack-a** replication.”

Conversations have already started between SkatePhilly and some of the skate-industry’s bigger companies who have expressed “real interest in the project. I’m very optimistic we’ll get sponsors onboard. It’s just too early to say when it’ll happen, though some are hoping it can be as early as next summer.”

Having the skate industry involved in it will help fill funding gaps considering the city and state wouldn’t exactly rush to spend dollars on such a project like they did with Paine's Park at Martin Luther King Jr. Drive and Benjamin Franklin Parkway. 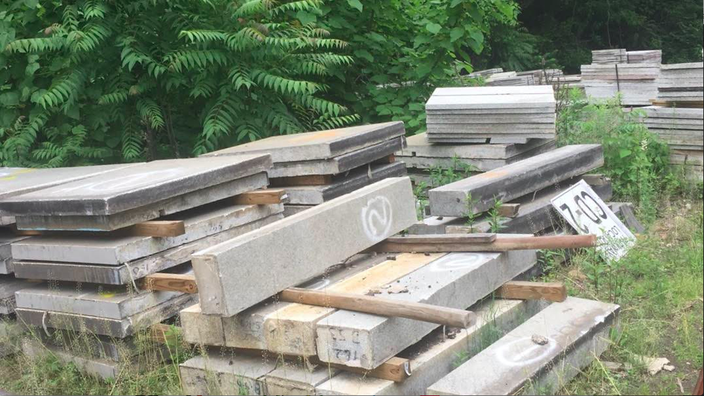 When the city closed Love Park for renovations, skateboarding enthusiasts salvaged much of the granite from the site for use at a future skatepark in Philadelphia. Despite reports to the contrary, enough remains in the city to be put to use locally.

“We’ll never have another Love Park, but we can have a park with the opportunity to do something really cool if we get them to buy in,” he said.

They’re not at a loss for granite, though.

Rendell provided a slew of photos that speak to the claim that they preserved three or four levels from Love Park as well as the skateable ledges.

“It was a huge project. An extreme amount of work went into salvaging it,” he said. “We rented a truck and forklift, stacked it all by ourselves, funded it. Three or four people worked three days straight.”

After the salvage effort, they agreed to share some of the granite with Gustav Eden, the city of Malmö, Sweden’s official skateboarding coordinator. It was the Love Park mystique that drew Eden’s interest, and a donation was made to the organization to help support the local efforts.

“We made sure we weren’t giving away stuff that would hurt our ability to complete the project here,” Rendell said, noting that the Swedes requested a lot more than locals were willing to part with. 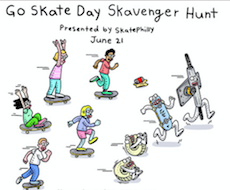 SkatePhilly has an array of skateboarding-related events scheduled throughout Philadelphia on June 21, 2017.

None of that will come to fruition before SkatePhilly sponsors a slew of Go Skate Day events in Philadelphia on Wednesday, June 21.

“Cities like New York and Los Angeles have had great Go Skate Day events, but Philly has never had anything like it because there was nobody to bring it all together,” Rendell said. “We can be the organization to start doing that. This is us saying, ‘We’re going to do something. We want to build a sense of ownership. Everybody can be involved.”

Go Skate Day Skavenger Hunt: From 8 a.m. to 4 p.m., SkatePhilly will host an interactive scavenger hunt with different skate-themed tasks at various skateparks and other locations throughout the city. Participants will snap photos, check in at specific locations, and answer trivia questions to accumulate points and win prizes. To participate, users will need to download the Scavify app, create an account, search "Go Skate Day" and join the hunt. The hunt will conclude at Paine’s Park where winners will be announced and prizes will be awarded at about 4:30 p.m.

Parks on Tap: Philadelphia’s first mobile beer garden is back for its second season and its stint at Paine’s Park starts off with a Happy Hour Fundraiser from 5 to 7 p.m., with 50 percent of all sales benefiting SkatePhilly.