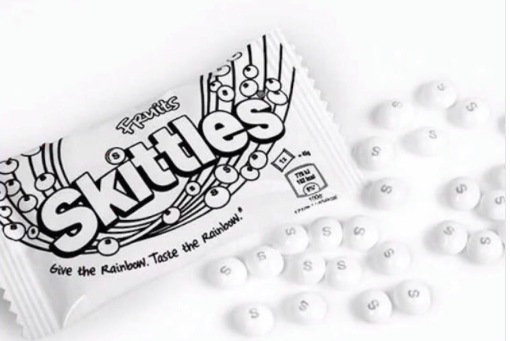 Brands all around the globe are stepping up to embrace the celebration of Pride Month with special promotions and rainbow-inspired social media campaigns.

Nike released its annual "Be True" sneaker collection, Target rolled out its annual Pride merchandise and Instagram added colorful stickers and filters for the month of June, to name a few.

Skittles finds itself in something of an odd Pride Month predicament. For a candy whose slogan is "Taste the Rainbow," the simplest and safest approach might logically be to stand pat and give a hearty show of support for the LGBTQ community on social media.

But for the second year in a row, Mars, Inc. decided to roll the dice on a campaign that features limited edition all-white candies. The well-intentioned promotion is explained in the display shown below.

Some on social media interpreted the gesture as a subtly racist misfire.

I dont think skittles thought through the LGBT pride campaign..

Releasing all white sweets during "pride"..

The jokes write themselves

Also do white Skittles feel a little racist to anyone?

Skittles realized how white/capitalist PRIDE was becoming and wanted to join in the efforts. Interesting. https://t.co/HIHZDYslxN

These White Supremacy Skittles are brilliant.

Wow, where is the all black Skittles? This is absolutely disgusting, a prime example of everyday white washing and I will NOT stand for it 😡 https://t.co/uVSY9ZFOtr

using the LGBT committee as a cover to practice racism in plain sight.. why couldn't it have been white AND black skittles? 🤔 https://t.co/vK6dcH4JUS

Many others, sizing up the backlash as feigned outrage, were unwilling to feed into it and came to Skittles' defense.

With everything going on in the world, how can people waste energy being mad at a #skittles #pride campaign?

@Skittles Yo, good move- screw anyone that can't see the beauty in what you did #Skittles

Ignore the haters @skittles - internet warriors want to misconstrue all. Well done on giving 2p per pack of #skittles to #lgbt charities

Ppl have something to say about everything! Take out rainbow colours & ur left with b/w. Simple as. #Skittles #Pridehttps://t.co/37rG865dsG

People need to take a chill pill not EVERYTHING is about race. Well done #Skittles awesome idea for a great cause! :) #PrideMonth

This isn't the first time Skittles — a candy you'd have to be missing a heart not to love — has landed in the middle of a controversy surrounding race and nationality.

During the 2016 presidential campaign, Donald Trump Jr. tweeted a photo of a bowl of Skittles with a caption that read, "If I had a bowl of Skittles and I told you three would kill you, would you take a handful? That’s our Syrian refugee problem.”

There's a reason the image is no longer displayed in the tweet: the licensed photo was taken by a refugee who fled Cyprus during the Turkish occupation in 1974. The man, now living in Britain, said he'd never take Trump's money to use the photo.