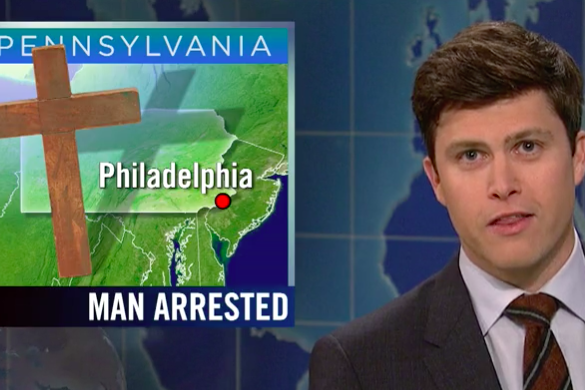 Michael Grant, aka Philly Jesus, makes "Saturday Night Live" on May 7, 2016 after an arrest at the Apple Store in Center City.

Philly Jesus has ascended to the pinnacle of his reenacting career: "Saturday Night Live."

It had already been an eventful week for the LOVE Park street preacher, who was arrested Monday night for trespassing and disorderly conduct at the Apple Store in Center City. The absurd news made waves — apparently there isn't a top dog Jesus wannabe in every large American city — and finally wound up on the desk of Colin Jost for a Weekend Update (skip to 3:24 for the bit on Philly Jesus).

Michael Grant, the actual person behind Philly Jesus, has since published a letter attempting to dispel the "misinformation flying around" about the circumstances of his arrest. Despite an "engaging in fighting" qualifier attached to the disorderly conduct charge, Grant claims he was nonviolent throughout Monday's episode and the arrest is a symptom of "Christians being harassed and discriminated against these past several years."

To the crowd who wants Philly Jesus to be gone and media types to stop giving him publicity, lighten up. He's got a very high threshold to be newsworthy and when he crosses it, no pun intended, it's well earned—even the legitimately sketchy stuff.

Misguided though he may be, Grant says his whole thing is really about bringing "hope and healing to a hurting world," which is pretty noble and probably best when it comes as a laugh. This is a bit like the time he tried to raise $70 million on GoFundMe in order to launch a new global ministry.

Grant, who had all charges against him dropped after a 2014 arrest, will appear in court on May 17.