3-7 inches of snow expected across much of region 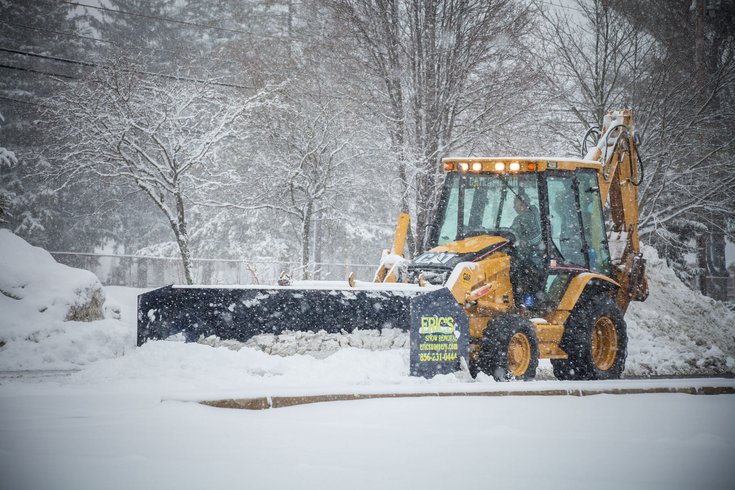 A front-end load clears snow in Voorhees on Thursday afternoon.

Long in coming, heavy snow is blanketing the Philadelphia streets and South Jersey sidewalks.
It is expected to last most of the day Thursday before ending around 8 p.m.
According to the latest National Weather Service forecast, overnight rain showers and sleet switched to snow before 8 a.m., but some areas, including Bucks County, saw snow as early as 5 a.m. Temperatures were falling through the day.  Total snow and sleet accumulation of 3 to 7 inches is expected.
In anticipation of hazardous road conditions and concerns about power outages, New Jersey Gov. Chris Christie on Wednesday night issued a state of emergency for all of the Garden State, and a snow emergency is in place for Philadelphia.
SEPTA said regional rail service was suspended around 3:30 p.m. on the Wilmington-Newark line. Already suspended due to Amtrak power problems were the Chestnut Hill West and Cynwyd regional rail lines. 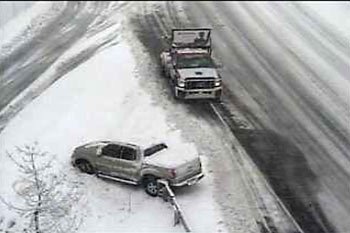 Around 2:10 p.m., the  westbound lanes of the Pennsylvania Turnpike were closed between the Valley Forge and Coatesville interchanges due to an accident, according to 511PA.com. A 45-mph speed restriction is in effect on I-95, I-76, I-276, I-676, Route 422, Route 1 and I-476 through Lansdale, according to 511PA.com. There is a 35 mph limit on the New Jersey Turnpike, and the Delaware River Port Authority bridges. There were numerous other reports of vehicles losing control on slick, snow-covered roads by late morning, including a pickup truck on Route 309 at Norristown Road in Spring House, Montgomery County, above, and a dump truck that slid off an exit ramp in King of Prussia.
In addition, Philadelphia sent home all non-essential employees at 1 p.m.  The snow emergency declared at 6 a.m. is still in effect until further notice.Philadelphia schools are closed, the city canceled trash collection for Thursday and warned residents to move cars from snow emergency routes. A list of those routes can be found here.
Dozens of other area school districts in the Philadelphia suburbs and South Jersey are also closed Thursday, including Centennial and Council Rock in Bucks County, the Lower Merion School District and the Haverford School in Montgomery County and the Delran Township School District in Burlington County and the Runnemede Borough School District in Camden County. A complete list can be found here.
All Camden county offices are closed Thursday, including the library, parks and colleges. Courts are closed in Philadelphia, Chester, Camden, Burlington and Gloucester counties. 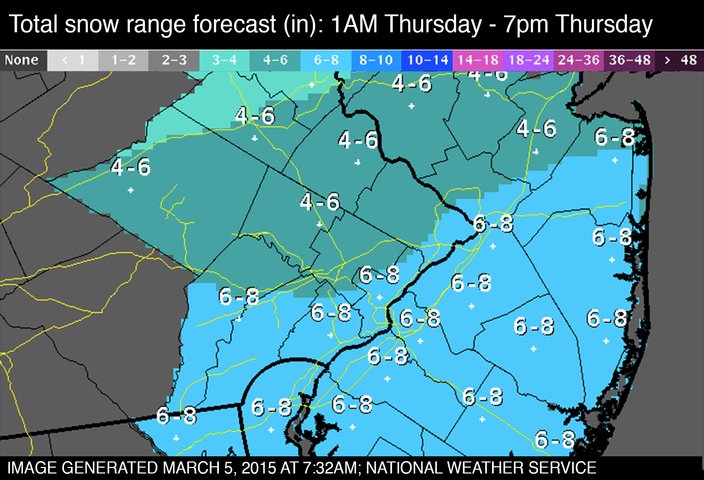 Earlier in the day, SEPTA updated its train and bus schedules:

BUS: The following bus routes have been suspended due to poor road conditions: 18, 35, H, XH and L.

REGIONAL RAIL: All Regional Rail lines will operate on a regular weekday schedule all day. SEPTA will not enact its Early Exit plan Thursday.

NORRISTOWN  HIGH SPEED LINE: Trains will operate every 15 minutes, making all stops. There will be no express service.

CCT-PARATRANSIT: Full service is planned for Thursday, but customers should anticipate delays due to accumulating snow and icy conditions. Customers should call CCT Control Center at 215-580-7720 to cancel trips if they don't plan to ride or to inquire about pending "Same Day" trips.
At Philadelphia International Airport, more than 400 flights have been canceled by early afternoon because of the weather, said airport spokeswoman Mary Flannery. But the airport remains open as crews alternate plowing runways, she said.
"As we plow one, planes land in the other," Flannery said.  Philadelphia International Airport normally has 1,100 arrivals and departures on a typical Thursday.
The Philadelphia Parking Authority announced it will be offering 24 hour $5 flat rate parking at several  Center City garages. The $5 snow rate will remain in effect until the snow emergency is lifted.
The garages are:

To receive the discounted $5 rate, customers must bring their ticket and pay at the PPA Management Office in each garage. The PPA said it will enforce all snow emergency and safety violations during the storm but will not enforce meter and time limit violations. 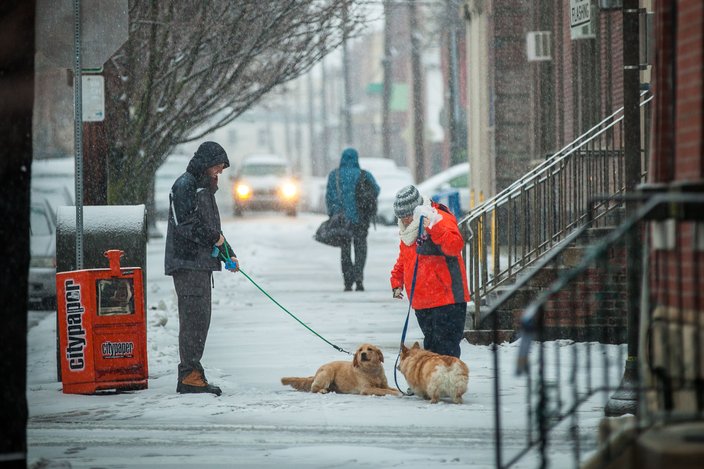 Two dog owners in Fairmount, out for a walk in the snow early Thursday morning, give their pets a chance to catch up on the weather. (Thom Carroll/PhillyVoice.com)
The winter storm finally reached Philadelphia after dumping as much as 16 inches of snow on parts of Kentucky by early Thursday morning.
Parts of Arkansas, Illinois, Indiana and Ohio recorded as much as 11 inches of snow, according to the weather service.
West Virginia Governor Earl Ray Tomblin mobilized the state's National Guard ahead of the storm, and Louisiana Governor Bobby Jindal declared a state of emergency.
A total of 2,289 U.S. flights for Thursday were canceled, according to FlightAware.com, with Dallas/Fort Worth International the airport hardest hit.
Boston, which posted its coldest February on record, might not see any snow from the newest storm, the weather service said, contrary to earlier forecasts that projected as much as three inches for the city.
Boston needs two more inches to break its record annual snowfall total of nearly 108 inches, which was set in 1995-96.
Here's the forecast for the rest of the week in Philadelphia:
Thursday night: Partly cloudy, with wind chill as low as -3.
Friday: Sunny, with a high near 27.
Friday night: Mostly clear, with a low around 7.
Saturday: Mostly sunny, with a high near 38.
Saturday night: Partly cloudy, with a low around 24.
Sunday: Mostly sunny, with a high near 42.
Sunday night: Partly cloudy, with a low around 26.
Reuters contributed to this report.