No injuries reported, although FAA has closed the airport until further notice 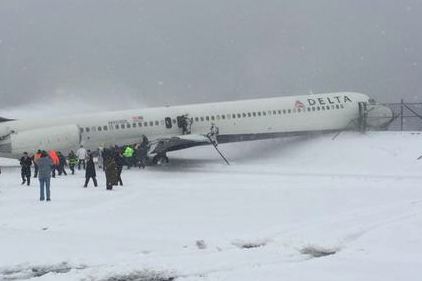 Plane skids off runway at LaGuardia, crashes through fence Thursday.

Delta Flight 1086 headed from Atlanta to New York has reportedly skidded off a runway and crashed through a metal fence while attempting to land at LaGuardia Airport at around 11:10 a.m. Thursday.

According to the Associated Press, 125 passengers and five crew members were on the aircraft, which is said to be leaking fuel. Everyone on board was safely evacuated from the plane and bused to a terminal.

No injuries have been reported and the cause of the incident is under investigation. The snowy weather that blanketed the northeast may have played a part.

The Fire Department of New York says emergency responders are assessing people as a precaution.

Directly after the incident, the FAA closed the airport, but it reopened 2 p.m. Thursday.

Flights in and out of Philadelphia International Airport have not been effected by the LaGuardia shutdown, said spokeswoman Mary Flannery.

UPD: #Delta Flight #1086 had 125 people on board, all have been evacuated, only minor injuries reported. #LaGuardia pic.twitter.com/9YcBIy94hZ

Emergency crews at the scene of #Delta plane that skidded off the runway at LaGuardia. Pic by _veeestchic_ pic.twitter.com/AbAyjIkQt8