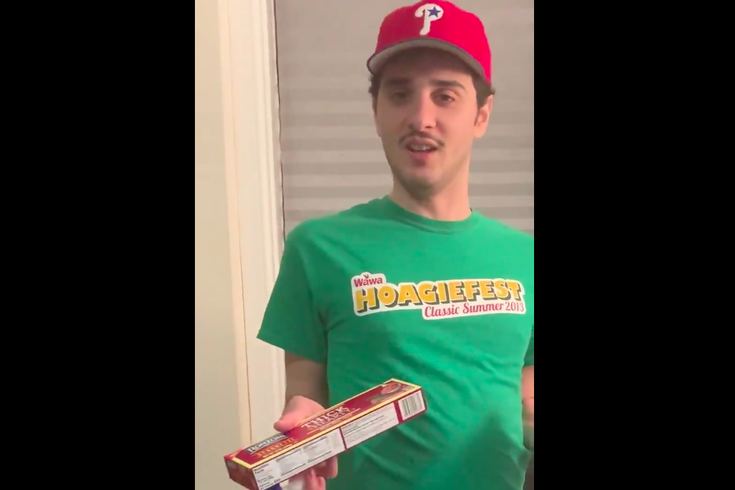 Dominick Nero, of Haddon Township, posted a video on Twitter titled, 'Trapped in Quarantine with your South Jersey Boyfriend.' The parody shows appreciation for Wawa, shore homes and Philly sports amid the coronavirus crisis.

A Haddon Township native got a little homesick during his time in quarantine and decided to make a video of all things South Jersey.

Dominick Nero, who is currently living in Brooklyn as a video editor and writer for Esquire, paid homage to his hometown region with a video titled "Trapped in Quarantine with your South Jersey Boyfriend." The video went viral after it was posted to Twitter on Wednesday. It has gained more than 500,000 views and 15,000 likes.

So, what does being quarantined with a South Jersey boyfriend look like? Well, he has a lot of casual conversations with his cat about the Phillies and the Flyers. His grocery shopping involves two jugs of water, pork roll and enough pasta to last until the end of lockdown. And he's constantly singing "Fly, Eagles, Fly."

At the end of the day, Nero gets pretty emotional watching classic Phillies highlights and missing a trips to Wawa for some Tastykake Krimpets.

He also can make water ice by hand, or at least he's trying. And, naturally, he's contemplating getting a place down the shore.

Though, the real the icing on the cake: “So in conclusion, I'd probably say my top three bridges are Tacony-Palmyra, Walt Whitman and Ben Franklin.” Um, what about the Betsy Ross, dude?

trapped in the quarantine with your south jersey boyfriend pic.twitter.com/ecwjeSuxts