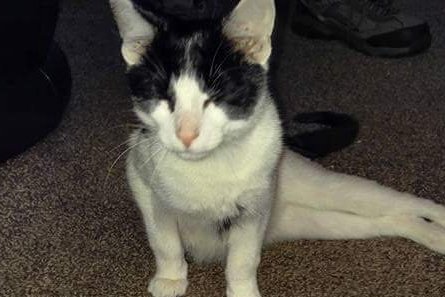 Lindenwold, New Jersey, police and the New Jersey SPCA are investigating allegations that someone tossed this cat from an apartment balcony onto the concrete below. Good Samaritans took it to a 24-hour vet clinic in Linwood, New Jersey. The cat, now known as Ezekiel, may have sustained rib and spinal damage.

LINDENWOLD - An animal welfare organization is investigating allegations that a cat was tossed from an apartment balcony and possibly suffered crippling injuries last week.

An employee of the Red Bank Animal Hospital in Linwood, where the cat, named Ezekiel, was taken after being found by good Samaritans, said she was not permitted to discuss the condition of the animal.

The cat is no longer at the facility, she said.

She added she could not say whether or not the animal is still alive.

Apparently, a good Samaritan found the injured animal on Feb. 9, a day after the cat crashed to the concrete pavement – unconfirmed social media accounts refer to broken ribs and a possible spinal injury that kept the cat from walking.

A message for the New Jersey Society for the Prevention of Cruelty to Animals, which has police powers in all animal cruelty cases in the state, was not immediately returned Wednesday morning.

A spokeswoman for the Lindenwold police department said the SPCA is in charge at this point, with police assisting.

She also said much of what has been said on social media contains “misinformation.”

On its Facebook page, the police department has posted:

“The Lindenwold Borough Police Department is assisting in the New Jersey SPCA's investigation.

"The Police Department is requesting information from any individual who may have knowledge of the incident in question.

“In the event you have any information concerning this incident, we are requesting that you contact the New Jersey Society for the Prevention of Cruelty to Animals at 1-800-582-5979."

A cat activist claimed on Facebook that two people at the apartment complex were questioned, but not charged. The poster claimed police have decided not to charge anyone – but the spokeswoman for the police department said that is not true.

A related petition, with more than 4,000 signatures, calls for charges to be filed. The petition appears to be the source for the assertion that police have chosen not to pursue charges. Attempts to contact the person responsible for the post have so far been unsuccessful.