With dignity and in the manner of your choosing 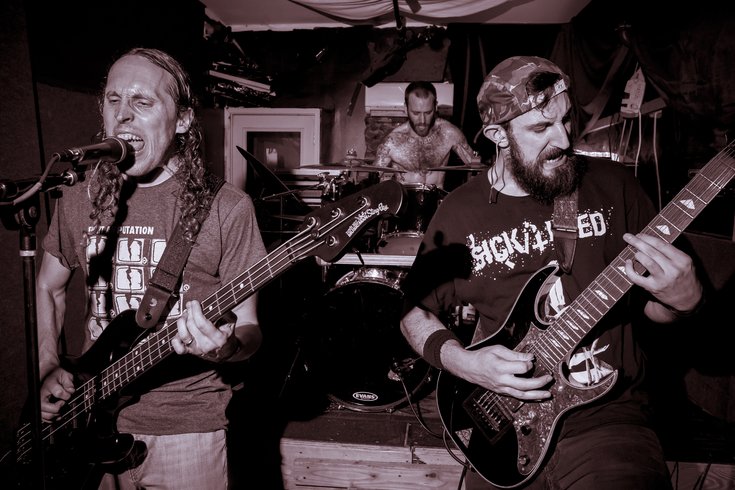 Slide Die Choking’s second EP out of its sleeve and you’ll find that the record is wrapped in a form for a living will. Fully legal in most states.

Given this Philly grindcore band’s name — not to mention lyrics like “I stab God’s eyes” or “disembowel if you disobey” — it’d be easy to mistake the document for a macabre joke.

As it turns out, Die Choking is deadly serious.

“It’s frustrating to me to see that kind of disconnect,” Herzog said. “A lot of my experiences in nursing have informed my ideas on health and the human condition.”

A fan of Reagan-era punk bands like DRI and the Dead Kennedys, Herzog recognizes that their pointed songs are undeniably effective but often remain tied to that period in history. He prefers to take a less literal approach to getting his point across, avoiding specific political rhetoric. The band’s first full-length LP, “III,” is tied together with the loose thread of Plato’s allegory of the cave, a metaphor for education and ignorance that has remained profound in its simplicity for thousands of years.

“I never want to be in a position where I feel like I’m preaching,” said Herzog, who has degrees in political science and philosophy as well as nursing. “Grindcore is a protest art form at its core, and from gay rights to animal rights, we talk in-depth about political topics. We’re very anti-authoritarian, but, at the same time, we have a more humanitarian outlook. We present it in enough of an artistic way that you feel the song more than the message, but the message amplifies the depth of the issue.”

“We have a more humanitarian outlook.” —Paul J. Herzog

The intellect with which Herzog approaches lyrics that, in practice, are growled out over unrelenting rhythms and brutal, breakneck riffs is just one example of the way that Die Choking combines intensity and thoughtfulness. All three members of the South Philly trio are veterans or current members of several other bands — most notably, Herzog was formerly with Total Fucking Destruction, guitarist Jeffrey V. Daniels with prog-doomers Burden, and drummer Joshua T. Cohen splits his time with the currently on-hiatus hardcore group Cop Problem.

Given the knowledge gleaned from those past experiences, they came together as Die Choking with a very clear concept in mind. Daniels, a graduate of University of the Arts and sometime graphic designer, gave the albums a cohesive look, with each one dominated by a single color that captures the music’s feel. Cohen, who also runs the underground music website Blow The Scene, brought his perspective to the business and marketing end of things. And musically — quite simply, Cohen said, “We knew we wanted to play really fast short songs.”

Die Choking has certainly achieved that goal. With two EPs and one LP currently to their name (which, incidentally, comes from the fate that the vegan Cohen once wished upon a certain ex-Eagles quarterback convicted of killing and torturing dogs), the band’s recorded output still clocks in safely under the 30-minute mark. The 11 songs on the recently released “III” total a little less than 14 minutes, with only two tracks lasting more than a minute and a half.

The 11 songs on the recently released “III” total a little less than 14 minutes.

Compared to some grindcore acts, known for quick, violent eruptions of sonic aggression that can be over in whiplash-inducing seconds, Die Choking’s songs are downright epic. That’s due in large part to the fact that even as they steamroll over you, you’re able to admire their songcraft.

“The punk element of grindcore comes in with the punk simplicity in songwriting,” Herzog explained as the band convened for beers and shots at the Boot & Saddle, where they’ll play on Thursday night with Finnish grindcore band Rotten Sound. “But we throw in odd bridges and changes and breaks because we’re still progressive nerds and we like to push our instrumental capabilities. I want to hear a chorus; I want a repeated verse. We all like a ton of pop music.” 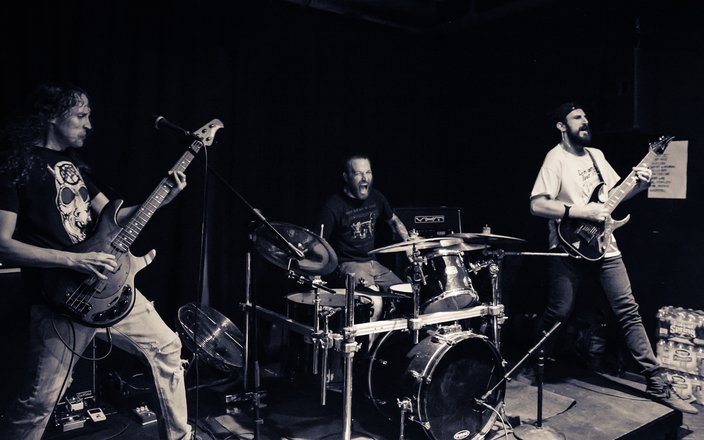 Over the course of an hour, influences that arise in conversation range from the obvious (metal touchstones like Death, Carcass and Macabre) to the much more unintuitive likes of Kendrick Lamar, The Bird and the Bee and Dave Brubeck — whose famous “1-2, 1-2, 1-2, 1-2-3” rhythm from “Blue Rondo a la Turk” undergirds “Dwell,” one of the songs on Die Choking’s latest. “If you rewind and watch jazz drummers like Chuck Webb,” Cohen said, “they were playing grindcore speeds back then.”

Discussing the invigorating speed and intricacy of Die Choking’s songs, it becomes instantly clear that all three members are attracted to that pace as much because of its physicality as because of its sound. A dedicated runner, Herzog said that he’s been able to cut down his exercise regimen since the band started working together in 2013. “Every time we play live it’s like I just ran a 5K.”

Daniels added, “You’re totally soaked in sweat and looking at everybody like you want to kill them, but energy-wise, it’s a more potent, full-on adrenaline rush. And people respond to the cathartic experience.”

Cohen compared playing the band’s songs to a demanding sport, and much like following an athlete’s progress, it’s possible for audiences to see Die Choking develop – they record their songs chronologically, so that the first track on their first EP is their earliest song. It’s an approach that Daniels likened to “a photo album of songs.”

“It’s always been said that as a musician your reach should exceed your grasp,” Cohen concluded. “We really pushed ourselves on the last record, and in the studio, we were just able to get through it. Now, after a year of touring the world and playing these tracks hundreds of times, it’s much more natural. We always try to push each other past our limits.”