Why was South Philly's night sky purple on Thursday? For a young girl and the rare condition that took her life

Mila Gray Roomberg died from complications of Neurofibromatosis Type 1 and high blood pressure. Her family's foundation helps her live on 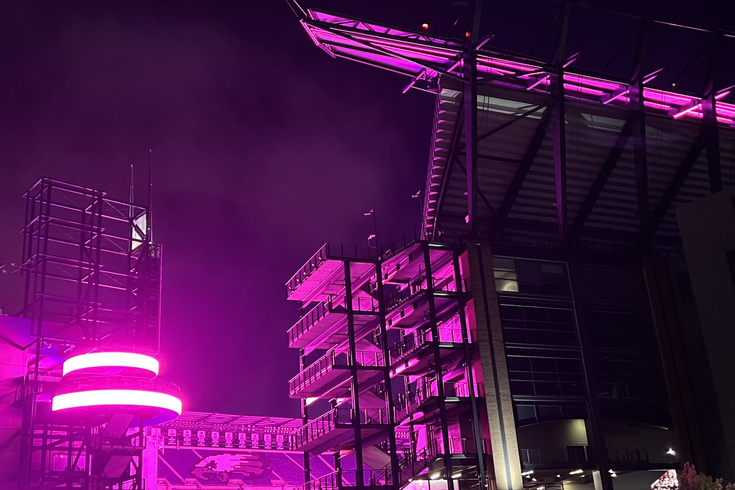 Lincoln Financial Field was one of several Philadelphia buildings and landmarks lit pink on Thursday, May 12, to raise awareness for the Magical Mila Foundation. The organization is dedicated to improving detection and treatment of Neurofibromatosis Type 1 and related high blood pressure conditions that can develop in young children. The display turned the sky in South Philly purple, leading many to wonder what was behind it.

Philadelphia didn't enter the Upside Down of "Stranger Things" lore on Thursday night, when a portion of the South Philly sky turned a purple and pinkish hue.

Some perplexed Philly residents shared photos of the unusual night sky and wondered what could explain the beautiful color on the horizon.

Not sure what's going on tonight at Lincoln Financial Field but all the lights in the stadium are pink which has the sky in South Philly colored pink. Pretty cool. pic.twitter.com/dzJdG8kHfB

It turns out the purple sky was caused by pink lights inside Lincoln Financial Field, one of several buildings in Philadelphia that went pink to raise awareness for the Magical Mila Foundation. The fog that rolled through Philadelphia accentuated the glow.

Mila Gray Roomberg was just 17 months old when she died three years ago from Neurofibromatosis Type 1, a genetic condition that in rare cases can cause abnormally high blood pressure. The disorder occurs in roughly one out of every 3,000 births, usually detected at a young age with symptoms that can be managed for patients to lead healthy lives.

"No two cases of NF1 are the same," said Jessica Roomberg, Mila's mother and the head of the foundation. "About 50% of cases are inherited and the other half are spontaneous. My husband Dan and I didn't have any history of NF1."

Many people with NF1 develop reddish-brown skin marks, benign tumors, musculoskeletal deformities and learning disabilities. Some people have no symptoms at all.

Until three months before her death, Mila hadn't shown any signs of serious danger from the disease. She was being treated at the Children's Hospital of Philadelphia, which had been monitoring her and doing routine MRI's to stay on top of her development and a heart murmur she had.

But during one of Mila's follow-up appointments, she was found to have developed vascular issues that resulted in a narrowing of her aorta that had caused her blood pressure to spike beyond levels a child her size could withstand. Doctors said her case of NF1 was extremely rare.

Mila was diagnosed with NF1 at 2 months old. At a 1-year check-up, Mila was also diagnosed with Mid-Aortic Syndrome and Renovascular Stenosis. In her memory, her parents raise awareness for NF1 and high blood pressure in infants and toddlers.

After weeks of medical management using a cocktail of medications at CHOP, Mila had to undergo emergency surgery in Michigan. The procedure sent her into cardiac arrest and she died of resulting complications.

"We went into a deep depression for months coping with Mila's death," said Roomberg, a former executive producer at FOX29, who recently stepped down from her role producing "Good Day Philadelphia."

In 2019, Roomberg and her husband created the Magical Mila Foundation to raise awareness of NF1 and the need for better blood pressure monitoring in young children.

Last year, the foundation had several Philadelphia landmarks and buildings lit up pink to honor Mila and her favorite color. Thursday night marked the first time Lincoln Financial Field joined the event for the foundation and NF Awareness Month. Boathouse Row, the Ben Franklin Bridge, One and Two Liberty, the Melon Bank Center, Subaru of America and Philadelphia International Airport all participated this year.

The flood of light from the Linc, in particular, contributed to the sky's change of hue.

Derrick Pitts, the Franklin Institute's chief astronomer, said this year's display had to do with weather conditions — and a little bit of Mila's spirit.

"The purple-pink sky (aside from Mila) was the colored light from the buildings being scattered by the tiny droplets of moisture that make up the fog," Pitts explained. The pink mixed in with the darker sky to give a more purple appearance.

Since the launch of the Magical Mila Foundation, Roomberg and her team have worked with specialists at CHOP to establish the "BP Under 3" initiative, a clinical trial that works to overcome technology limitations and clinical difficulties in measuring pediatric blood pressure. In high-risk patients like Mila, such readings can be pivotal in making a life-saving hypertension diagnosis.

"Even though Mila was supposed to get her blood pressure taken routinely, it either wasn't getting done or they would take it and then they would give up, because she would scream and cry," Roomberg said. "That can lead to a false positive. She only had it taken one time on her leg. That didn't show her high blood pressure. To get an accurate blood pressure on a child, you have to take it in the right upper arm."

CHOP researchers who help run the clinical trial found that less than 2% of children who should have their blood pressure taken actually get it done. Since last November, CHOP has increased that rate to 15% and the clinical trial is in the process of being rolled out in primary care, subspecialty care and several satellite offices in the CHOP network.

“The taking of blood pressure has historically been problematic,” Dr. Kevin Meyers, director of CHOP's hypertension clinic, told the Children's Tumor Foundation. “You need to have a child that is quiet, so even in children over three there are issues. One of the biggest problems we have is that if it's measured at all, it’s measured in the leg, and if there is blockage or narrowing of the aorta you get an incorrect impression.”

The BP Under 3 initiative also has developed a system to alert medical staff when they need to obtain a blood pressure reading on a high risk child under the age of three. Other continuing education materials have been created to make sure medical staff are informed about patients' blood pressure needs.

The Roombergs and the Magical Mila Foundation have raised nearly $400,000 for CHOP and hold annual events at the Jersey Shore with "Good Day Philadelphia" anchor Mike Jerrick, a close friend of the Roomberg family.

Jessica and Dan now have two children: 2-year-old Liam, whose name is made of the letters of Mila's name, and 5-month-old Meadow, named after Mila's love of butterflies.

Roomberg said she's now focused on growing the foundation and raising her two kids, but Mila remains an integral part of the family.

"We look at the Magical Mila Foundation as our way of continuing to parent Mila and watch her grow up," Roomberg said.