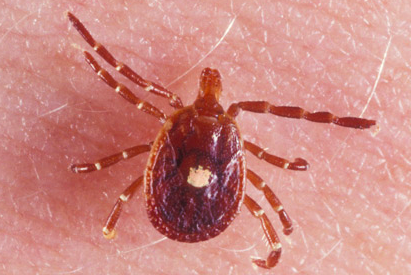 The lone star tick is becoming more prevalent in Northeast states including Pennsylvania and New Jersey. In some people, the tick's bite is known to cause alpha-gal syndrome, which produces allergic reactions to red meat consumption.

The arrival of warm weather in the United States coincides with the start of tick season, when people are at the highest risk for bites that may lead to a range of nasty conditions. Lyme disease is the most common tick-borne illness among humans, but the threat of alpha-gal syndrome, which causes allergic reactions to red meat consumption, is now a growing concern among public health officials.

The spread of the lone star tick, named for the white spot visible on the backs of females, has been associated with a rise in the number of cases of alpha-gal syndrome in an expanding territory. Native to the southeastern U.S., the species has successfully moved north and west over the past two decades, surviving milder winters as climates warm.

Lone star ticks were observed in Pennsylvania in 2017 and have appeared in much of New England as entomologists set out to learn more about the species. Tracing the origins of alpha-gal syndrome cases is difficult due to people traveling during the summer months, when bites are most likely to occur.

Allergic reactions to lone star tick bites are believed to be connected to the protein-linked sugar alpha-galactose. The lone star tick's primary mammalian hosts contain these sugars, which then get passed on to human hosts through the insect's saliva.

People don't naturally produce alpha-gal sugars. This makes us genetically vulnerable to them because the human immune system perceives the sugars to be a foreign substance. Initially, a person bit by a lone star tick may have a mild to moderate allergic reaction at the site of the tick bite, which is the result of an initial antibody response.

The real problem comes when a person with a lone star tick bite later consumes red meat that carries alpha-gal sugars. The body again mounts an immune response, often much more severe and with a delay of two or more hours. This can lead to much more serious symptoms including hives, nausea, vomiting, heartburn, indigestion and diarrhea.

In the worst documented cases, people with alpha-gal syndrome have entered anphylactic shock or have come down with swelling of the lips, throat, tongue and eyelids. Some people also experience a drop in blood pressure, dizziness and faintness.

Once a person gets alpha-gal syndrome, their red meat allergy lasts a lifetime. Others who are bitten by lone star ticks have milder reactions or develop no apparent meat allergy at all.

The New Jersey Department of Health recently shared information and tips about the risks of lone star ticks to educate the public as the insects become more prevalent in the region.

Nearly a decade ago, in 2013, there were estimated to be about 5,000 diagnosed cases of alpha-gal syndrome in the U.S. Testing for the disease has increased exponentially during that period, in part because of better awareness of the disease and recognition of symptoms that correspond to red meat consumption.

The Washington Post recently interviewed a few people who developed alpha-gal syndrome in response to a lone star tick bite. Keith Tremel, a Maryland native and competitive barbecue cook, remembered the moment five years ago when he was bit on the thigh by a tick. It woke him up in bed and he removed it, but he didn't realize the extent of the problem until he ate a hamburger not long after and developed mysterious symptoms.

When the pattern was repeated after subsequent burgers, Tremel did some research and came across information about alpha-gal syndrome. He went to visit his doctor, who hadn't even heard of the disease.

“It was not comforting when I realized I knew more about alpha-gal than a medical professional,” Tremel told the Post.

Tremel has had to modify the way he cooks, avoiding red meat and pork for himself. Even handling raw meat sometimes produces reactions for him, so he wears protective gloves.

Another man, a retired entomologist, said the he suffered severe reactions to red meat after he was bitten by a lone star tick in Virginia. He was diagnosed with alpha-gal syndrome about six years ago and recalled losing his vision on the way to the emergency room.

Most people with alpha-gal syndrome are not affected by consuming poultry or dairy products. The emergence of meat alternatives and animals genetically modified to remove alpha-gal sugars also may enable people who have the disease to enjoy meat again.

The New Jersey Department of Health offers a number of tips to prevent tick bites and instructions on how to remove them using fine-tipped tweezers. The area of a bite also should be cleaned using rubbing alcohol, an iodine scrub or soap and water.

When it comes to lone star ticks specifically, it's important to remember that only females have the distinctive marking on the back. Males also can transmit alpha-gal syndrome, but aren't as easily identified. In general, lone star ticks are larger and have longer limbs than deer ticks, or black-legged ticks, which transmit Lyme disease. They also differ in appearance from dog ticks, which are comparable in size, but have shorter limbs.

Research on alpha-gal syndrome represents a growing field as medical entomologists and immunologists look for more effective ways to monitor the disease and lone star tick populations. The best steps people can take include learning and practicing precautions around ticks when spending time outdoors and maintaining properties.