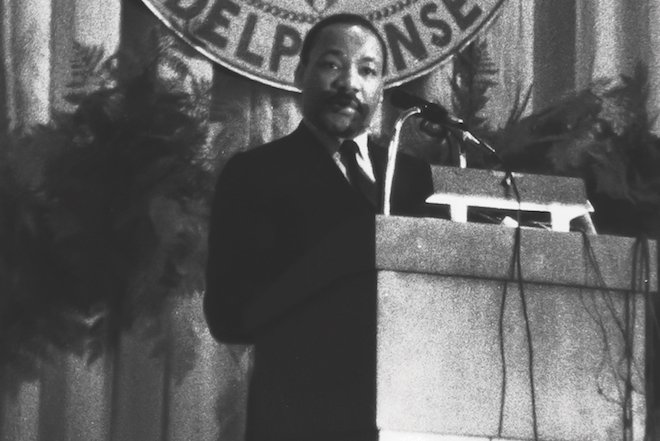 Five decades ago, the Rev. Dr. Martin Luther King brought an unpopular message to St. Joseph's University, where he urged President Lyndon B. Johnson to "admit we've made a mistake in Vietnam."

It was not the first time King had voiced such criticisms. But as he delivered his speech on Oct. 26, 1967, he remained one of the few national leaders willing to blast the war effort.

In addressing some 1,700 people, King chastised the United States government for spending more money on "an unjust and immoral war" than fighting poverty. He also repeated pleas for white and black people alike to recognize that their destinies were interconnected.

Wednesday marks 50 years since King was gunned down at the Lorraine Motel in Memphis. His April 4, 1968 assassination came just five months after his speech on City Avenue.

"You think, geez, he was just here," said James Mingle, the student body president who helped arrange King's visit to the university, then known as St. Joseph's College. "Just the shock of losing him that night – I remember just looking up at the TV at the time and seeing it come on in breaking news. It was extremely shocking."

The civil rights icon helped spur significant changes in a nation marred by racism, including the 1964 Civil Rights Act and the 1965 Voting Rights Act.

Yet, many of the issues raised by King at St. Joseph's – like income inequality – are still being debated today.

'THIS FIGHT IS NOT DONE'

"When we remember him as this American leader, I think we're forgetting how far we still have to go," said Brian Yates, an assistant history professor at St. Joseph's. "He allows all of us to realize that this fight is not done. We still have work to achieve, not only America's dream, but Martin Luther King's dream."

In the months before he died, King had railed against the Vietnam War, arguing the money being poured into the conflict would have been better spent combating income inequality in the United States.

"You know, we spend about $500,000 to kill every enemy soldier in Vietnam," King said at St. Joseph's. "And we spend only $53 a year in the poverty program for everyone categorized as poverty-stricken. This is a terrible mix-up in priorities."

At that point, it was not an easy position to take.

"He was one of the few national leaders back then to step out and speak against the war," Mingle said. "It was a war that was incredibly costly, but it also diverted from the achievements and the importance of social justice and civil rights."

Mingle, 72, of Ithaca, New York, recalls critics chastising King for his stance, claiming he was venturing outside his domain as a preacher and civil rights leader.

"What [King] said at St. Joe's was whetting the fact that one can be pro-American and also be anti-Vietnam. And that we must challenge our political officials to live by America's dream." – Brian Yates, St. Joseph's professor

They said, "You shouldn't be opining on what our military's needs and wants are," Mingle remembered. "That's what I recall back then. It's one thing that a politician or senator would be speaking out, but (they said), 'You – stick to your domain.'"

Viewed in that light, Yates sees similarities between King and Colin Kaepernick, the NFL quarterback who has been maligned for sparking league-wide protests against police brutality.

"At the time that (King) was around, he was seen as a radical rabble rouser," Yates said. "He was as unpopular in America as Colin Kaepernick is now. We need to really evaluate why the message of love and empathy would be unpopular. Why would someone trying to give rights for people to vote – why would this man be hated?"

"We really wanted him because he was an extraordinarily effective leader in charging social justice and combating racial inequality," Mingle said. "We were really eager for the college community to hear his remarks about the civil rights movement."

'OUR DESTINIES ARE TIED TOGETHER'

At St. Joseph's, King received a "warm response" from the students and faculty who gathered to hear his remarks, according a Philadelphia Inquirer story published the following day. He reportedly received "thunderous applause" after he urged Johnson to admit Vietnam was a mistake.

The newspaper did not mention any protests. But Yates – who participated in a community reading of King's speech held by St. Joseph's last fall – noted the college newspaper published several letters from students criticizing King's appearance.

It certainly was not a speech without opposition, even if that opposition mostly remained silent, Yates said. "I think, idealistically, he was speaking to a hostile audience. But they wouldn't vocalize that hostility."

In the decades since King's death, viewpoints on the civil rights leader have drastically shifted to the point that he is now nearly universally revered, Yates said.

Yet, Yates cautioned against viewing King in the "sanitized" light that many see him today – a nonviolent advocate for political rights. Nor should King's legacy be confined to voting rights, he said.

"King has been put into this political box while, in many ways, he was much more about economics," Yates said. "What he said at St. Joe's was whetting the fact that one can be pro-American and also be anti-Vietnam. And that we must challenge our political officials to live by America's dream."

King consistently challenged America to live up to its varied promises, Yates said. In his later years, that included advocating for economically-oppressed people of all backgrounds.

King brought that message to St. Joseph's, too. He urged the crowd to recognize that the future success of black and white Americans was interwoven.

After concluding his speech at St. Joseph's, King addressed students at Barratt Junior High School in South Philadelphia and appeared at a "Stars for Freedom" show with Harry Belafonte, Aretha Franklin and Sidney Poitier at the just-opened Spectrum.

There, King acknowledged that efforts to complete racial freedom in the United States faced great opposition, but said the nation held the resources to achieve that goal.

"The question we must face is whether we have the will," King said.