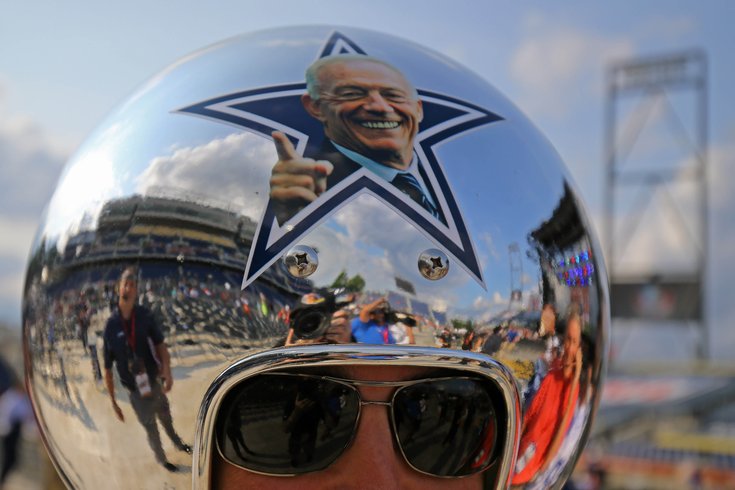 A Cowboys fan shows support for owner Jerry Jones prior to his 2017 NFL Hall of Fame enshrinement.

Each Friday for PhillyVoice, Steve Maltepes, known as “The Philly Godfather,” will impart his gambling wisdom on the Eagles and where the smart money is going on various pro and college football games this weekend. Maltepes is one of the nation’s hottest sports betting experts who appears weekly on national radio and has his own website, thephillygodfather.com.

What is the line telling you: This game opened with oddsmakers and offshore citing the Eagles as a 6.5-point favorite. We immediately saw sharp money hit the screen and started to shape this line, which forced bookmakers to move this game to 7. You have to be careful, because this was a move by the wiseguys to manipulate the market and try and grab a better number on the Cowboys. There is a ton of public money all over the Eagles here, with 80-percent of the tickets placed currently on Philly. On game day, that may become even more top heavy.

Even with the Eagles acquiring a new weapon for Carson Wentz in Golden Tate, this should be a defensive, low-scoring game, with the Birds’ defense always playing lights out at home and the Cowboys having one of the better passing defense in the league. Look for the Cowboys offense to be real conservative, running the ball more after Ezekiel Elliott rushed for only 61 yards last week. That will keep this game within the number.

Bottom line: The smart money likes the Cowboys plus-7.5 and the under small.

What is the line telling you: The oddsmakers and offshore sports books opened this game as a pick ‘em with the combined total at 51.5. The sharp money hit the screen hard and picked Tampa big. That grew to Tampa being a minus-1, then a minus-2. Pinnacle, the sharpest sports book in the world, has made the 5-3 Redskins a 3-point road underdog. Vegas never gives out free money, and they’re begging you to take the Redskins here. Right now, the tickets are split 50-50 offshore and in Vegas. The big bets, the sharper bets have been all over Tampa Bay here, with 85-percent of the sharp money has been on Tampa Bay. Any time you have a first-place team catching points on the road against a last-place team, be very careful.

Bottom line: The smart money likes the Bucs minus-3.

What is the line telling you: This game opened Sunday night with the Bears being 6.5-point favorites and the total being 47. Since then, this line has been bouncing around from anywhere from 6.5 to as high as that key number of 7. The bigger, however, came on the under, as the wiseguys nibbled and pounced on the total, which forced bookmakers to move this line to a whopping three points, where it finally settled at 44. The early reports were showing that the Bears were getting all of the attention from the recreational sports bettors.

As of right now, 65-percent of all tickets placed by your Average Joe have been on Chicago, while the overall money wagered is basically a 50-50 split. After the Bears’ huge 41-point outburst last week, the bookmakers know the public will be betting on Chicago. Detroit is a complete mess at this point in the season. The Lions; metrics are in the basement with everything. Detroit has won nine of the last 10 games between these two teams. We don’t like a side here.