Staycation, anyone? Get reacquainted with Philly on Memorial Day Weekend

Fall in love with Philly this Memorial Day 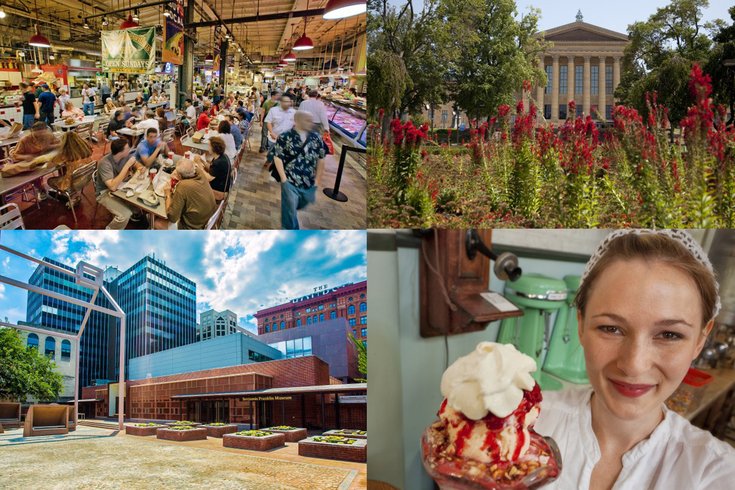 Fall back in love with Philadelphia this Memorial Day Weekend.

You never did put the deposit down on that beach house, and it seems your friends bailed on the weekend in New England that you discussed during a particularly tipsy night out last month. That can only mean one thing: You’re stuck in Philly for Memorial Day weekend. And while you could try to score a last-minute invite to a friend’s rooftop barbeque with all the requisite watermelon beer you can drink (again), why not try something different this year?

Whether you’re a history nerd like me, want to catch some rays outside the office or just need to impress your in-laws with some local color – here are some of the smartest, coolest and most easily digestible ways to become the ultimate tourist in your city. Because when was the last time you actually walked down Elfreth’s Alley when it wasn’t First Friday? Exactly.

For the History Buff

It’s easy to forget that the City of Brotherly Love is actually one of the most historic destinations in the country. There’s a reason packs of tourists are making you wait longer in line for iced coffee come spring – Philly is a fun place to visit. And while most of us may dash past some of the best sites to see on the way to work, happy hour or the Phillies game, having a front row seat to the cradle of liberty has its perks, like taking a closer look at where America got its start at Independence Hall, or having a revolutionary-style sip at City Tavern (try the Thomas Jefferson Tavern Ale).

The Benjamin Franklin Museum – arguably the coolest tourist trap in town – offers a crash course in one of the most fascinating Philadelphians ever in the place he called home. Have any doubt? Stop by the Book Trader to pick up one of many biographies about Big Ben – his life has more twists and turns than the Kardashians.

The National Constitution Center’s Founding Documents Tour celebrates the 228th anniversary of the Constitutional Convention just in time for the start of Presidential campaigning – find out what the talking heads are really talking about with a glimpse into the democratic process. The center also hosts a Memorial Day Flag Ceremony on the front lawn to remember those who have served the country.

Even if you were the person who fell asleep in history class, you may get a kick out of the Constitutional Walking Tour (there’s a wireless option for the anti-social types among us) to find out the secrets behind the country’s humble beginnings. Like, did you know Pennsylvania is spelled wrong on the Constitution? It’s true. If you prefer a more down and dirty approach to history, sign up for the Vampires, Brothels and Ghosts Walking Tour. You’ll be amazed by how many brothels there were in Old City at the time of the Revolution.

For the Art Lover

Hit the Parkway for the day, exploring the “Adventures in Photography” exhibit at the Philadelphia Museum of Art, sculptures at the Rodin Museum (the outdoor garden is perfect for a lunch break) and Philly native Shelley Spector’s show at the Perelman Building. The Barnes Foundation is also taking a look at “The Order of Things” with a special exhibit of Judy Pfaff, Fred Wilson and Mark Dion.

Down the street at Moore College of Art, the oldest women’s art college in the country, things get weird with a site-specific installation by Gibbs Connors. The shop at Moore is a great place to pick up a souvenir that supports the arts and more than a few current students.

Murals have been a hallmark of the Philadelphia art experience. Check out the newest of the oldest to be unveiled at the Eastern State Penitentiary this season. The Mural Arts Program also has a “Love Letter Train Tour,” which takes a look at street artist ESPO’s series of painted messages in West Philly.

When was the last time you visited Old City just to check out the galleries? Avoid the First Friday crowds for a more intimate tour of the city’s most inspiring art spaces. Or cool off at the Pennsylvania Academy of Fine Art (the building is a standout designed by Frank Furness and George Hewitt), where a few notable exhibitions are on display, including student work, Impressionistic masterpieces and an early David Lynch film.

If you’re really into architecture, look no further than the tours offered by the Philadelphia Center for Architecture, which will have you looking up and away from your phone in no time.

Many people don’t know that one of the most famous and prolific horror writers penned some of his most beloved masterpieces in Philly. The Edgar Allan Poe House, quietly situated on a stretch of Spring Garden between the Loft District and Northern Liberties, intimately tells the story of the man behind works like The Raven and The Tell-Tale Heart. The museum’s housed in one of the author’s former residences (he also lived on Arch and Locust streets) and showcases a few personal items and insights into his mad, creative life.

Across the river in Camden is where Walt Whitman hung his hat (literally) while enjoying the fame that the publication of his masterpiece Leaves of Grass brought him. The row house on Martin Luther King Dr. (formerly Mickle Street) is where he hosted many famous artists and writers from around the world before his death, including Philly painter Thomas Eakins (who lived in Fairmount). The house isn’t far from where the poet is buried in Harleigh Cemetery (Whitman designed his own tomb), where you’ll also find the resting places of Civil War soldiers and a few notable politicians.

If you want to get up close and personal with some famous tomes, then the Rosenbach Museum & Library offers hands-on tours of everything from Lewis Carroll of Alice in Wonderland fame to Bram Stoker’s Dracula. Meanwhile out in West Chester, the Baldwin Book Barn is a charming bookshop (the barn dates back to 1822) with more than 300,000 reads, maps, estate collectibles and fine art stuffed to the rafters.

When people think about getting fresh air in the city, most people think of Kelly Drive and the Wissahickon – and for good reason. But there are a few other lesser-known destinations that are sure to impress even the most hardened urban adventurer – like the Reading Viaduct, an abandoned railroad that stretches from Callowhill a mile into the city. The meandering path provides a fresh look at the city from the bottom up. The Friends of the Rail Park, a group interested in turning the space into a park, offers guided tours with insights into the history of the abandoned track.

Try also seeing the city in a new way on an Indego Bike Share along the Schuylkill Banks, or even on a Segway Tour. Outdoorsy types may also want to check out some of the hardcore fitness classes being offered in plein air, like Yoga at the Piazza or Ranger Training Bootcamp in Rittenhouse Square. Your abs will thank you for it.

Who doesn’t love miniature golf? Hit a few balls with the kids before taking a carousel ride at Franklin Square. Don’t forget to visit Franklin Fountain for an old-fashioned ice cream experience (they even have vegan dips) or take a step back in time at Shane’s Confectionary, the oldest operating candy store in the country (weary adults may appreciate the gourmet coffee drinks served in the rear of the shop).

The PECO Theatre is home to Liberty 360, a high-tech 3D show that tells the story of historic Philly. For 15 minutes, families are immersed in the world of our Founding Fathers, with fun trivia about some of the most interesting aspects of the nation’s history. The Historic Philadelphia Center also helps kids dress up in authentic Colonial garb for better or worse.

Take a load off and hop on the Big Bus Company for a citywide tour (most tours offer the option to jump on and off at locations that appeal to the whole family, like the Rocky Steps, Zoo and South Street). The best seats, naturally, are on the roof deck of a double decker.

Don’t forget to stop by Sister Cities Park to cool off in the water fountains and to grab a cold drink. The park is in the heart of the museum district, just steps from the Franklin Institute and the Academy of Natural Sciences.

Oscar Wilde is in the spotlight at the Rosenbach Museum & Library with “Everything is Going Brilliantly: Oscar Wilde and Philadelphia.” This unique exhibition – chock full of books, letters, musical scores and drawings (including a manuscript for “The Ballad of Reading Gaol,” which he wrote after being imprisoned for being gay) – focuses on the gay writer’s life and work, as well as his connection to Philadelphia where he visited twice in the late 1800s. Philly was the only American city he visited more than New York City, in fact. His cousin, Father Basil W. Maturin, was an Episcopal rector at St. Clement’s Church. Wilde even stopped by to see Walt Whitman in Camden, to whom he later wrote, “Before I leave America I must see you again – there is no one in this wide great world of America whom I love and honour so much.”

The William Way LGBT Community Center also has its eye on the gay past, present and future in the form of a first-class archive of gay and lesbian history that spans the personal and historical with rare books, periodicals and other lesser-known ephemera. Philly is also home to the Barbara Gittings Collection, the second largest LGBT book, music, movie and periodical collection in the country.

If you want an oral narrative of Gay Philly, consider taking the LGBT Walking Tour, which starts at 401 Chestnut Street to get the scoop on what it was like being out in the Continental Army and how the Gayborhood became what it is today. Wrap up the day in the heart of the Gayborhood with a refreshing “Double Penetration” on the rooftop deck at iCandy. Um, that would be a frozen margarita sporting two bottles of Corona.

Philadelphia sure likes its food, but it’s easy to get stuck in a dietary rut. Rather than visit all the usual eateries (don’t worry, El Vez won’t go out of business without you), reinvigorate your taste buds with a City Foods Tour, like the Flavors of Philly, Craft Beer & Artisanal Cheese, Ethnic Eats or Decadent Gourmets treats.

Prefer to drink your feelings? Tour the Yards Brewing Company with guided tastings and insider access into where the malted magic happens. Or keep it simple and spend the afternoon in Reading Terminal Market sampling the sweet and savory.

It’s easy to go outside your comfort zone in West Philly by digging into international eats at Dahlak, Kabobeesh and Vientiane Cafe. What these no-frills eateries lack in ambiance, they make up in flavor.

Chef Joseph Poon also offers a Wok ‘n Walk Tour of Chinatown with lunch or dinner that includes stops at a fortune cookie factory and Chinese supermarket. Or you could take Tuesday off and drink your way through the city during an ever-so-refreshing Tour on Tap.