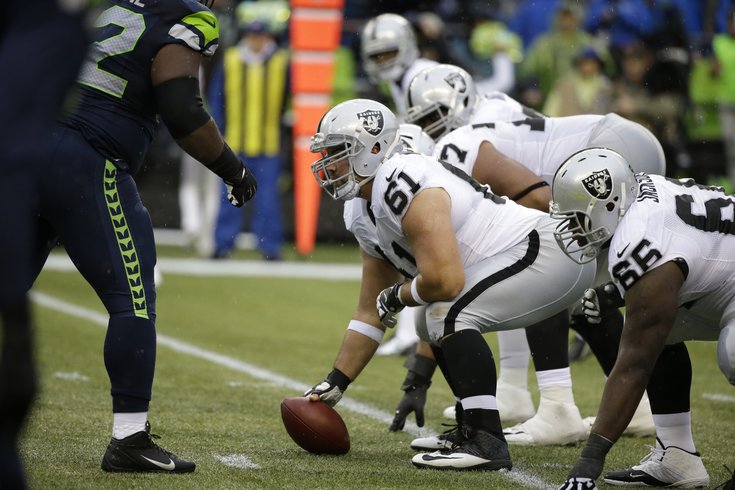 Stefen Wisniewski's tenure in Philly could be short.

Yesterday, the Eagles officially announced Stefen Wisniewski was joining the team on a one-year deal. Obviously, one year is less than multiple years, and therefor, a shorter-term commitment. #Analysis.

It turns out Wisniewski is looking forward to free agency next season when he hopes he can cash in on a good season in Philly. According to Wisniewski, it was his choice to sign a one-year deal.

"I wasn't getting the kind of money I was looking for in a long-term deal, so I kind of wanted to sign a one-year deal and get back to being a free agent again," he said.

The Eagles probably offer the best opportunity for Wisniewski to play. Before he signed, the Eagles' starters projected along their offensive line looked like this:

As the above chart shows, the Eagles have a gaping hole at left guard.

"I don't know exactly where I'll be playing," said Wisniewski. "I've played center, I've played guard. I played guard in college. I played guard as a rookie with the Raiders, and the last several years at center. So I've played both, and I'll play wherever they want me to. I'm fine with that. I'm just looking forward to an opportunity to play."

Barring injury, if Wisniewski starts this season, it will most certainly be at LG, and Wisniewski also gives the Eagles a capable backup at center should Jason Kelce go down.

"It certainly seems there's an opening (at left guard), and I'll compete wherever I can play," he said. "Wherever I can get on the field is fine, if it's left guard, center, right guard, tackle, I really don't care."

Getting on the field is of course the key point there. If Wisniewski cannot get on the field, his value in free agency a year from now will be very low. Wisniewski noted that the Eagles were the best opportunity for him. The Jaguars, Wisniewski's former team, apparently were not.

"They were kind of low-balling me to be honest," he said.

If Wisniewski plays well, the Eagles could certainly look to re-sign him to a long-term deal, but if feels more like the Eagles and Wisniewski are together on short-term convenience.