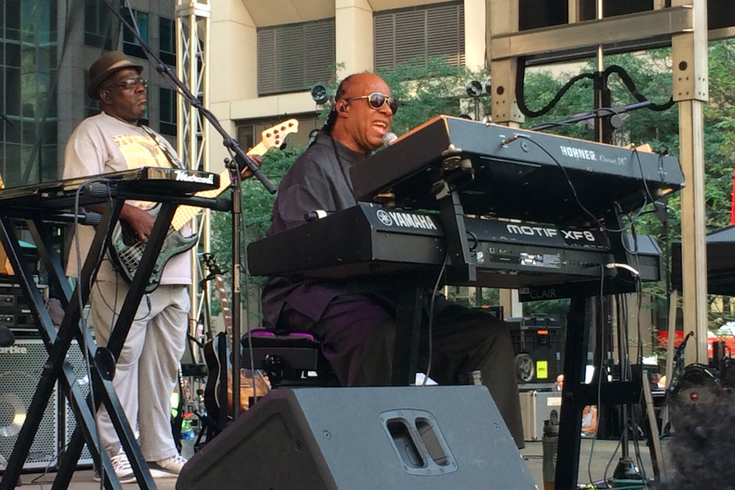 Residents, workers and tourists in Center City were treated to a not-so-surprise performance from a musical legend Monday afternoon.

Stevie Wonder made his way to Dilworth Park for a free, short pop-up concert at 3 p.m.

Ted Mankin, vice president of booking at Live Nation, told radio station WTOP this morning that it's part of a three-city tour Wonder planned for today, starting in Washington, D.C. and ending in New York City. The mini tour is titled "#AWonderMoment."

Wonder managed to fill about half of Dilworth Park, a sea of sweat-soaked collared shirts, dads with kids on their shoulders and longtime Stevie fans miming to every song. The six-song setlist included "Love's in Need of Love Today," "Uptight (Everything's Alright)," "I Wish," "Hey Love," "Superstition, "Sir Duke" and "As."

For many Philadelphians, the concert was, in fact, a wonderful moment.

Nora McMahon, a native Philadelphian visiting from Chicago, told PhillyVoice that she did a double-take when she first read that Wonder was performing for free. She was so excited, she was practically in shock.

As someone who's attended multiple Wonder concerts through the years, including an earlier date from his current tour, she described the energy this afternoon as being as much about love and unity as any other Wonder concert.

"It's always every color, every age, every creed gettin' down with it. It's like going to church," she said. "It's also the only place you'll see grown men screaming, 'We love you, Stevie!'"

Arthur Aston made the journey from Delran, New Jersey. He told PhillyVoice that, as someone who has lived with spina bifida, a birth defect concerning the development of the spinal cord, for his entire life, Wonder is always an inspiration to experience live. Going, he said, was a no-brainer.

"It's never too far to see Stevie," he said. "To see someone with a disability be successful, be positive and make [a] change, that's a big thing for me."

"Stevie is one of my biggest influencers," 19-year-old Harry Levant, part of the Philly jazz band The Excursions, told PhillyVoice. "Just to see someone like Stevie show up out of nowhere and do this, it really means something to me."

Thematically, Wonder's chitchat with the audience had a running theme of anti-gun-violence -- a message that resonated particularly well in a city that's been host to 692 shootings this year.

"Basically, I just feel we have to find a way where everyone is accountable for whatever gun they have," Wonder said, before trailing into remarks about police brutality. "Because if you are going to shoot a gun, you need to claim the bullet."

Logistically, the event seemed to go off without a hitch. Security personnel told PhillyVoice that no problems arose, and the only major complaints among crowd members were related to the awkward location of the stage (partly blocked by SEPTA's elevator shaft and a black tent) and, of course, the heat.

The concerts were scheduled to promote the second leg of Wonder's “Songs in the Key of Life Performance” tour. At Wonder's Dilworth Park concert, he announced that he will play Wells Fargo Center on Oct. 7. Those tickets go on sale Friday, Aug. 21.

Live Updates from the concert:

Alright, concert's over. Bows have been taken. Go back to work, folks! #AWonderMoment

Stevie seemed to suggest @jsullivanmusic will join him at his Philly concert date at @WellsFargoCtr this fall. #AWonderMoment

What an insane turnout for the pop-up Stevie Wonder concert at Dilworth! Great job to the PR team, etc! Wow.. pic.twitter.com/oSonJNxRXR

Stevie's giving us a bonus track. Because we're awesome. Jazmine Sullivan has joined him on stage. #AWonderMoment

Enjoying the free Stevie Wonder concert in #DilworthPark with a couple thousand of my closest Philly buds! #hothothot pic.twitter.com/WOmhZRwlWG

"Sir Duke" now. Philly sure feels it all over. #AWonderMoment

"Uptight (Everything's Alright)" sure managed to bring this crowd to life. People singing along from the second-floor windows of City Hall.

Stevie's headed into his second song; Dilworth Park is about halfway full. "This is all about love," says Stevie. pic.twitter.com/TTvcw1uvC5