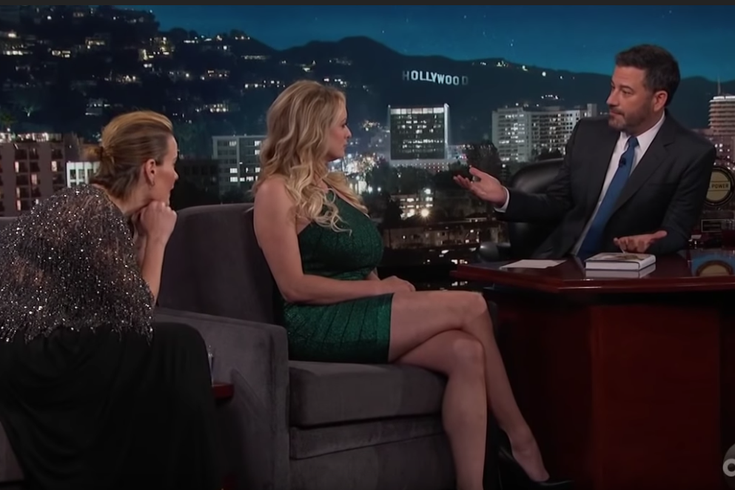 Stormy Daniels appeared on Jimmy Kimmel Live! on Tuesday, Oct. 2 with a rather gleeful Sarah Paulson.

“I’m happy you’re here,” Paulson said to Daniels after she sat down next to Kimmel.

Due to her nondisclosure agreement and legal issues, Daniels could not discuss in detail the alleged affair prior to this interview. But that all has changed now. The interview with Kimmel recounted her experience with President Donald Trump in rather gritty and elaborate detail. From the initial meeting at a golf tournament in Lake Tahoe to meeting him at the hotel room, there isn’t one detail the adult entertainment star left out - nor one Kimmel would have let her leave out.

Even though the book recounts Daniels’ life, Kimmel just wanted to skip it all and talk about the Trump affair. Daniels mentioned she believed they were only going out to dinner, but she arrived at his hotel room only to find him wearing black silk pajamas. She then forced him to change.

“He followed orders much better back then," she said.

“I don’t know. I think you could still order him around a little bit,” Kimmel mentions.

Without missing a beat, Daniels replies, “I’d have to speak in Russian though,” to which Paulson gave her sign of approval.

Daniels mentions how disappointed she was there was no actual dinner.

“He lied to to me. I’m very food motivated, which is why I stayed and held out for so long because I was told there would be snacks.”

She added: “Maybe that’s why I was easy prey, because I was light-headed.”

She also recounted the "spanking incident" which she then softly recreated with Kimmel. He stopped for a moment afterwards to “pray,” saying, “Please god, let him be watching right now.”

Kimmel then forays into the actual affair, motioning, “…And you made love.”

A surprised Daniel harped, “Gross! What’s wrong with you? I laid there and prayed for death.”

In keeping with Daniels' "Toad from Mario Kart" description, and forever ruining "Mario Kart" for millions of fans, Kimmel then proceeded to lay out assorted sizes of orange mushrooms. She then begins to pick from the lineup in order to find the most accurate example of Trump’s…well, just watch.