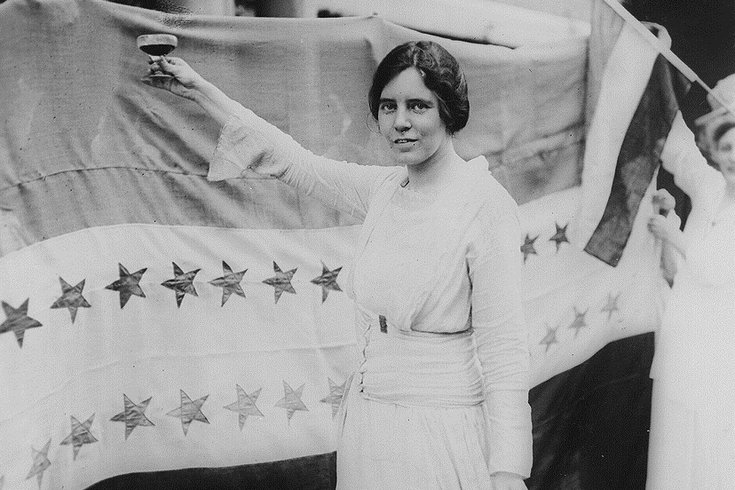 Feminist Alice Paul was born in Mount Laurel, New Jersey. This photograph was taken shortly after the passage of the 19th Amendment, which gave voting rights to women.

Alice Paul marched, fought and starved for equal rights for women. 131 years after her birth, the legacy of the South Jersey suffragette is being recognized both in her hometown and globally, thanks to today's Google Doodle.

Born in Mount Laurel, New Jersey, on Jan. 11, 1885, the woman's right's champion grew up in a Quaker household where equality between the sexes was considered a God-given fact. For years she marched in the streets and endured hunger strikes in prison, until her relentless activism led to the passage of the 19th Amendment, which granted voting rights to women.

“Everyone can take a page from Alice Paul’s book, in that if you really want to make change, she really felt strongly that you had to have a bedrock belief in…the simplest concept that you can,” said Lucy Beard, executive director of the Alice Paul Institute in Mount Laurel.

That concept was equality. Paul's most famous quote is "there's nothing complicated about ordinary equality," and she focused her activism on a simple but monumental goal: enshrine gender equality in Constitution.

Google honored the activist today by putting an illustrated "doodle" of her on its homepage. The illustration shows Paul marching through the rain with a sign that declares, "Deeds Not Words."

As Paul's biography explains, "Alice’s parents raised her with a belief in gender equality, and the need to work for the betterment of society."

She studied biology at Swarthmore College, then took a job as a social worker in New York, where she was disturbed to see that her enlightened, egalitarian upbringing was not the norm. Practices like giving paychecks directly to a husband for his wife's work hurt poor, immigrant women in particular.

Paul then moved to England, where she met a group of radical feminists who took a more militant stance on women's liberation. Paul reportedly broke nearly 50 windows during various protests and began engaging in hunger strikes while in prison.

"Women were routinely beaten at their marches. Police would just come in and beat them, there was no problem with that," said Beard.

Besides breaking windows, the suffragettes did not engage in violence, and their tactics influenced social justice activism for decades.

“They were the inspiration for Gandhi…he was exposed to the English suffrage movement and that was what inspired his campaign of non-violence, which in turn inspired Martin Luther King,” said Beard.

Moving back to America, Paul directed her energies on a national amendment that would grant voting rights to women. She organized "Silent Sentinels" to protest outside the White House, refusing to stop her activism even after the U.S. entered World War I. Outraged at her unpatriotic behavior, angry mobs attacked the Sentinels and they were often arrested.

The physical abuse that Paul and other suffragettes sustained while in prison, including brutal force feedings when they went on hunger strikes, led to a public outcry. President Woodrow Wilson agreed to support the 19th Amendment, which passed in 1920.

Paul's job was not finished there. She fought for another amendment that would explicitly guarantee equality between the sexes — it passed Congress in 1972, but fell three states shorts of ratification. In 1964, she led an effort that persuaded Congress to add a sex discrimination clause to the Civil Rights Act.

Alice Paul died in 1977 in Moorestown, New Jersey. Her legacy lives on not just in the fact that women can vote, but in any protest movement that takes its inspiration from the deeds and courage of the suffragettes.

“I’ve felt, just like she did, my entire life, that men and women are equal and should be treated equally…and it’s still not done," said Beard. "And the only way that it will get done is for new generations to come along to demand it.”