Philadelphia joins other cities in promoting 24-7 availability for counselors 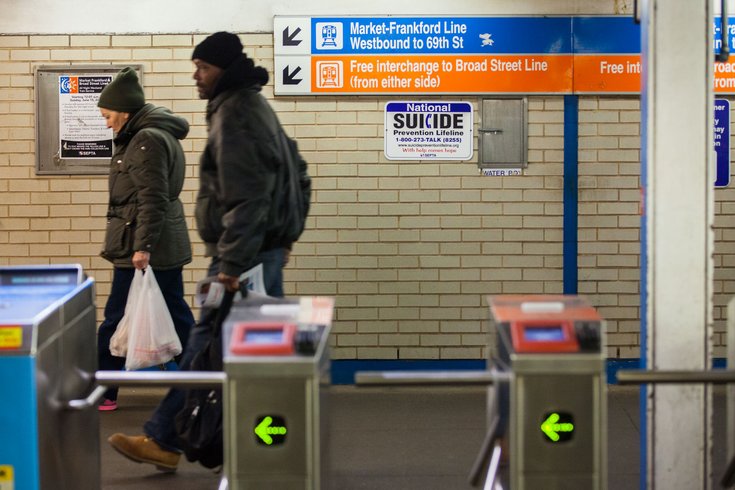 A National Suicide Prevention Lifeline sign hangs at the entrance to the Broad Street and Market Frankford lines at City Hall Station, February 12, 2015.

Along with the posted signs, officials are urging those who may think they might be in danger of harming themselves to call the National Suicide Prevention Hotline at 1-800-273-TALK.

The anti-suicide program began last fall and has continued with signs posted throughout the transportation system. The signs at the Langhorne station are the last to be unveiled.

“By placing the Lifeline signs at our stations, we believe that people who might think suicide is their only option will see that help is available 24 hours a day, seven days a week, 365 days a year,” said Scott Sauer, SEPTA’s chief officer of system safety, in a press release.

Last year there were three confirmed suicides on the city’s rail system. That was down from 11 cases in 2011, according to Heather Redfern, a SEPTA spokeswoman.

Deaths not confirmed as suicides are classified as trespasser fatalities, she added.

Philadelphia is not the only city to install suicide prevention signs at its stations. New York, Boston and Toronto have undergone similar campaigns.

It is the job of the medical examiner and not SEPTA to determine whether a death was a suicide.

So far in 2015, there have not been any confirmed suicides, according to Redfern. There have been two fatalities on SEPTA rails since January, including a 2-year-old boy who was struck and killed by a SEPTA trolley Thursday afternoon in West Philadelphia.