Laura Long, a computer systems engineer in Munich, loves her tattoos and her Wawa 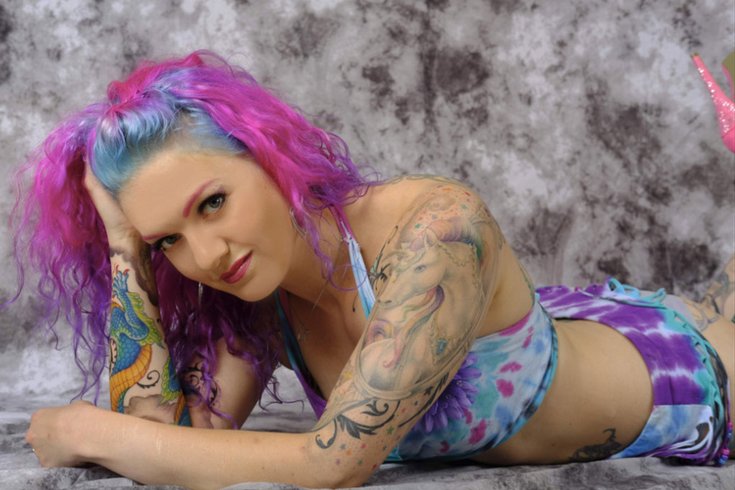 Laura Long, a native of Lansdale, Montgomery County, who now lives in Munich, Germany, is competing in a cover girl contest for Inked magazine. "I felt a little crazy entering (the contest), but I decided a long time ago to try to stay out of my own way and go for it if I want something," says Long, who is competing under her stage name, Nova Azul.

A suburban Philadelphia native living in Germany is looking for some support from her hometown.

Laura Long, who grew up in Lansdale, Montgomery County, and graduated in 2001 from North Penn High School, is competing in Inked magazine's cover model contest. (Be forewarned that the contest website features photos of partially-clad competitors.)

With a $25,000 prize at stake, plus an appearance on the cover of the magazine, a publication for tattoo enthusiasts, she needs your help to stay in an ongoing competition that will be decided by public vote.

RELATED READ: People are getting their dead loved ones tattooed on them – literally

In the International category, 82 competitors in her group have been whittled down to 10. She is currently in first place with another voting round set to close at 11 p.m. Tuesday that will narrow the field to five. If she wins that round, she'll move onto the semi-finals on October 30.

People can cast a vote at inkedcover.com every 24 hours, though additional votes can be obtained with a donation to Musicares, a charity that helps struggling musicians.

"I felt a little crazy entering (the contest), but I decided a long time ago to try to stay out of my own way and go for it if I want something," says Long, who has tats of a unicorn and phoenix. "I have dreamed of being in a tattoo magazine for a while, but I've never tried before. Seeing this contest gave me the little push I needed to just go for it."

“I still visit Philly regularly, and it will always have a big piece of my heart,” says Laura Long.

Long is a self-taught computer systems engineer for a major company, a field she entered after earning an associate's degree in visual communications and working in retail. She moved to Munich to help start up a new team for the company.

"Munich is beautiful, and living in a different culture with amazing travel opportunities is very exciting," Long says. "I still visit Philly regularly, and it will always have a big piece of my heart."

"I love the amazing conversations I have with random strangers in Philly, but in Munich everyone tends to keep to themselves," she continues. "People are very nice, just more private. And while there are many amazing German dishes here, nothing can ever replace The Fresh Works cheesesteaks, Rita's Water Ice and Wawa."

Like many of the women competing in the contest, Long is going by a stage name – "Nova Azul."

Her profile and a bunch of photos of her colorfully inked body can be seen here.

And she'd sure appreciate it – danke schoen! – if you'd support a hometown girl right through to the winning round.