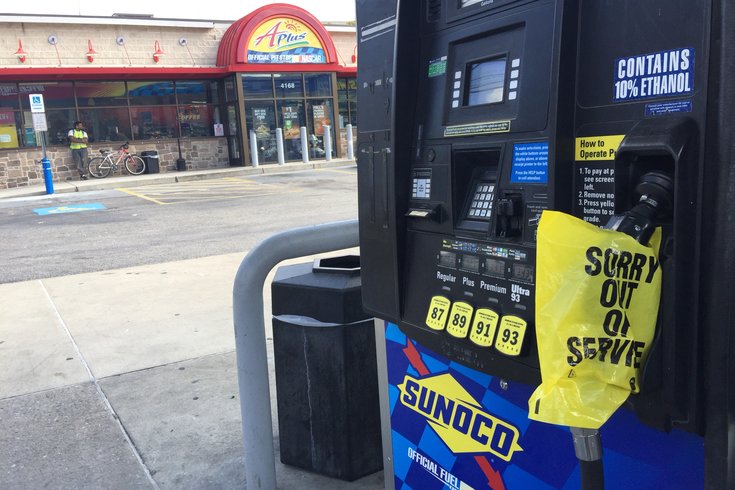 The Sunoco gas station a Ridge and Midvale avenues in the East Falls neighborhood of Philadelphia has been plagued by aggressive panhandlers, including some teens, seeking to be paid by customers to pump their gas. Some customers say they have had rocks thrown at them after they have refused to pay.

Bill Epstein realizes what’s happening at the gas station in his Philadelphia neighborhood happens all across the city.

But when you have children throwing rocks at people, and threatening customers when they don’t let them pump gas for money, he just had to speak up.

Last month, the president of the neighborhood’s Community Council took to the Next Door website to alert residents about “troubling” problems at the Sunoco station at the intersection of Ridge and Midvale avenues.

“It started as panhandling for tips and quickly moved to aggressive and even physical contact for tips and then to outright criminality in several forms,” he wrote. “The kids have thrown rocks at Sunoco’s investigators and they simply run away when police or Sunoco’s personnel drive up to the station.”

The purpose of Epstein’s post was to let residents know that a Sunoco investigator will be on hand at Monday night’s East Falls Community Council meeting (7 p.m. East Falls Presbyterian Church, Vaux and Midvale avenues) to discuss what they’re doing to help residents and customers feel more comfortable.

On Friday, he spoke with PhillyVoice about the ongoing issues, which both Philadelphia Police and Sunoco said they were aware and taking steps to rectify.

Epstein said that “for the better part of the summer,” teenagers and preteens headed to the gas station located just off Kelly Drive. Initially, they would ask customers if they could pump their gas for them.

“I was down there one day early in the summer and was asked if I wanted one to fill my tank for 50 cents. I told him ‘no thanks,’ and he left me alone,” Epstein recounted. “When I was getting in my car getting ready to leave, I heard a woman yelling, ‘No! No! No!’ He was literally grabbing the pump out of her hand.

“Instinctively, I said, ‘Sir, you heard the young lady say, no. Leave her alone.’ I’m a small guy. He was 6’2”. Oh, what have I gotten myself into, I thought. Luckily, he skulked away.”

That near confrontation didn’t have much of an impact for different groups of kids – “some are more polite than others” – who targeted the gas station, according to Epstein.

“It quickly moved from holding the door to the store open for tips to outright criminality.” – Bill Epstein

“It quickly moved from holding the door to the store open for tips to outright criminality,” he said. “If you said no, they would ask if they could hang the pump up for you. And, if you did that, they were leaving it still connected. When you drove away, they’d whistle for a friend to come over and they’d fill up on your credit card.

“Others would say they’ll pump $30 of gas for $20. They had stolen credit cards or Sunoco gift cards. Some asked to come inside and buy them a bottle of water. When customers who don’t know how to live in the city got back outside, their cars had been rifled through.”

In one instance, a pair of girls trying to sell things to customers were asked to leave the property by a Sunoco investigator. They responded by throwing rocks at him before hopping on a SEPTA bus, which he followed to North Philadelphia, where the girls got out at, ironically, another Sunoco station.

“He told me he saw a police officer pull up there and asked [the officer] to ask the girls for identification since they’d thrown rocks at him,” Epstein said of a conversation with that investigator. “The officer shrugged her shoulders, and said ‘What do you want me to do?’ I told the [39th District] captain about that and she said it was totally inappropriate, asked for the officer’s badge number.”

While some in the neighborhood hope that the start of a new school year will help cut down on these incidents, Epstein said some were at Sunoco this past Saturday and Sunday.

“That tells me they’re going to come back on Saturdays and Sundays, maybe even after school,” Epstein said, noting that police and Sunoco are “trying as hard as they can to help."

Jeamy Molina, a Sunoco spokesperson, said the company "has been in constant contact" with police and the EFCC.

"We've kept a log of all the incidents that have occurred in the area, as well as pictures, and provided those to the police department," Molina said. "We will push to create a comprehensive strategy with police to stop these incidents from continuing to occur."

Epstein said the company has been cooperative, but has seen the impact of the situation.

"Sunoco’s [sales] volume is down [at the location]," he said. "People, especially women, will just drive by since they don’t feel comfortable stopping when they see the kids there.”

He brushed off any online chatter of boycotts and urged customers and residents not to engage any of the children and teens at the site. He noted that it’s emblematic of an issue that extends well beyond East Falls.

“When I was there this weekend, I rolled my windows down and asked, ‘If I had a job for you, would you take it?’ Their eyes lit up,” he said. "We need to find better things for kids to do than harass people at the gas station for money.

“We can’t tolerate this kind of behavior, and we’re absolutely going to stay on top of it. We’re by no means giving up.”