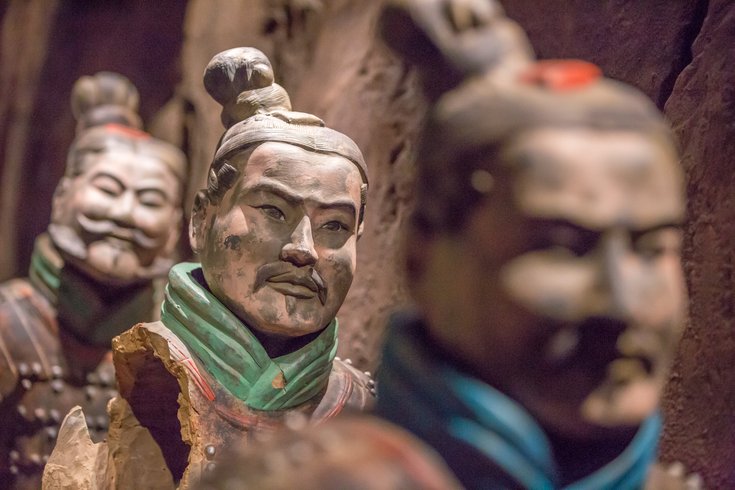 Warrior statues depicting various states of decay were placed in a scene resembling the site where they were found, allowing visitors to imagine the warriors in an archeological site.

Acts of vandalism and theft at The Franklin Institute late last year have Chinese officials fuming at the Philadelphia museum over its alleged carelessness in failing to secure valuable statues inside the "Terracotta Warriors of the First Emperor" exhibit.

An affidavit filed in federal court earlier this month accused Michael Rohanna, a 24-year-old Delaware man, of breaking off and stealing the thumb from a loaned terracotta statue called "The Cavalryman," a treasured piece valued at $4.5 million.

Authorities with the FBI's Art Crime Team visited Rohanna's home in January after reviewing surveillance footage from the night of an "ugly sweater" Christmas party at the museum on Dec. 21. The thumb, itself worth about $5,000, wasn't spotted missing until Jan. 8.

FBI says a US man stole the thumb of a 2,200-year-old Chinese terracotta warrior statue being displayed at the Franklin Institute pic.twitter.com/ZwzRrSq8V2

Investigators allege the video shows Rohanna, dressed in a green sweater and a Phillies hat, sneaking into the roped-off exhibit, taking a few selfies with the statue and then breaking off and pocketing something from the statues left hand. He's been charged with theft of an artwork from a museum, concealment of the artwork and interstate transportation of stolen property.

The historical significance of the statues to Chinese culture can't be overstated. The 10 sculptures in the Franklin Institute exhibit came from the tomb of China's First Emperor, Qin Shi Huang, and date from 210 to 209 B.C. The first emperor's armies united much of China under what became the Qin dynasty, which is believed to be the origin of the country's name.

In recent days, a pair of Chinese officials lashed out at The Franklin Institute and issued strong words to U.S. prosecutors, beginning with a statement in the Communist-leaning Beijing Youth Daily, translated by The New York Times.

“We call on the American side to severely punish the person who committed this destruction and theft of mankind’s cultural heritage,” an unidentified official told the newspaper, adding that two experts would be sent to the U.S. to repair the thumb.

In another statement reported Monday by the BBC, via China's CCTV, the director of the organization that loaned the statues took aim at The Franklin Institute, calling the museum "careless" with the statues.

"We ask that the U.S. severely punish the perpetrator," said Wu Haiyun, director of the government-run Shaanxi Cultural Heritage Promotion Centre. "We have lodged a serious protest with them."

Wu added that his organization also intends to file a claim for compensation.

In a statement late Monday afternoon, The Franklin Institute expressed utmost respect for the Terracotta Warriors and deflected blame for the security lapse.

With years of experience hosting world-class traveling exhibitions, The Franklin Institute has multiple levels of security in place to ensure the safety of our artifacts, everything from personnel to technology that meets and exceeds museum industry standards. On the night in question, standard closing procedures were not followed by the Institute’s external security contractor, Allied Universal. As a result of this incident, we have thoroughly reviewed our security protocol and procedures and have taken appropriate action where needed. The Franklin Institute’s own internal security team provided the FBI with the information necessary to identify the suspect and retrieve the stolen artifact.

The Franklin Institute has the utmost respect for the Terracotta Warriors and the rich Chinese cultural heritage they embody. This was a deplorable act, and we share in the condemnation of this crime as expressed by our partners at the Shaanxi Cultural Heritage Promotion Center. The Institute has been working with the FBI and the United States Attorney’s office to ensure that justice for the individual responsible is served. We will continue to cooperate fully with our partners in China to maintain and protect the warriors with the utmost care and reverence.

The statues displayed in the "Terracotta Warriors of the First Emperor" exhibit were first unearthed by farmers in 1974 and are part of a collection of thousands that were buried along with the emperor in 210 B.C. The Franklin Institute's exhibit will remain open through March 4.