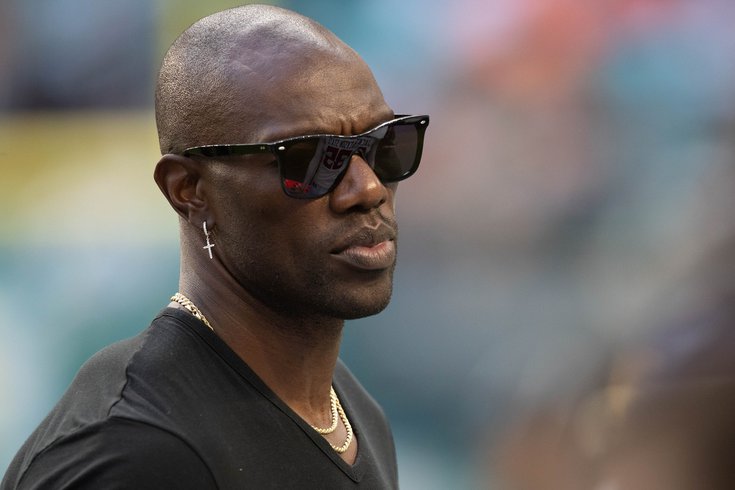 Terrell Owens shared a video of a dispute he had with a neighbor in Florida last week. The woman called police on Aug. 3 and accused the former NFL star of speeding and threatening her. No arrests were made.

Former Philadelphia Eagles wide receiver Terrell Owens is speaking out after a tense encounter he had last week with a neighbor who accused him of speeding outside of his home in Florida.

Owens, 48, shared a now-viral video of the confrontation that unfolded Wednesday night, when the woman called police to the scene in Broward County.

In the nearly 11-minute video, Owens explained that his neighbor called authorities to report that he had nearly struck her with his car and threatened her during an argument. Owens said he was simply going to his mailbox, was not driving aggressively and never made threats when the woman and her husband approached him to complain about his driving.

The Pro Football Hall of Famer described the neighbor as a "Karen," referencing the trend of viral videos that often show white women accusing Black men of wrongdoing and getting police involved. As a generalization, the derogatory name applies to women who display entitled and disruptive behavior.

When Owens questioned the woman's reasons for calling police, she responded on his Instagram Live video, "You’re a Black man approaching a white woman!”

As the the video unfolded, Owens spoke in disbelief about the situation.

When police arrived at the scene, one officer could be heard in the video attempting to defuse the situation, as Owens and the woman each shouted their sides of the story. Another neighbor could be heard defending Owens, saying he was not speeding and didn't threaten anyone. At one point, the woman began to cry.

Owens claimed the woman also taunted him for living in a "low-budget neighborhood" despite his lucrative NFL career.

"I don't do this, bro. I've never gotten in any trouble while I was playing," Owens said in the video, explaining why he got aggravated. "I don't get involved in any stuff like this, so for her to come at me like that, that's why I did that. That's why I came over here like, 'Ok, cool.' You want to come at me sideways, I'm going to come at you back sideways."

There were no arrests made in the incident.

TMZ obtained audio of the 911 call the woman made to police after her initial encounter with Owens.

"There's a car that's aggressively driving and almost hit me, and then (he got) out of his car to threaten me," the woman said. "He's in a green Genesis. He's an African-American individual."

Owens later shared a photo of the woman and identified her on Instagram. In a change.org petition signed by more than 16,000 people, Owens' supporters have called for the neighbor to face consequences for filing a false police report.

"To call the police for basically him just being a black man in his own neighborhood is just beyond unacceptable," the petition says. "Both police and taxpayer money are being wasted for calls such as these. Absolutely despicable. Please sign this petition now. This woman deserves to be in jail for false police reporting and her racist behavior that could of potentially led and claimed yet another innocent black life being taken had the police acted differently."

The petition called Owens' encounter "eerily and all to similar to the Emmett Till case," referencing the 14-year-old boy who was lynched in Mississippi in 1955 after he was accused of offending a white woman at her family's grocery store.

On occasion, confrontations like the one between Owens and his neighbor do lead to charges for making a false report.

Among the most well-known examples is Amy Cooper, the so-called Central Park Karen, who let her dog roam unleashed in an area of the New York City park where a Black man, Christian Cooper, was birdwatching in May 2020. Amy Cooper called police on the unrelated man when he began to record her with his phone, claiming he was threatening her and her dog.

The video of their encounter went viral, prompting Amy Cooper to be charged that summer with filing a false police report, a crime punishable by up to one year in jail. The charge against Cooper was later dropped after she completed an educational course. Cooper has denied she is racist and last year sued her former employer for the company's handling of the fallout from the video. Christian Cooper is reportedly going to get a birdwatching TV show on National Geographic.

The potential danger of such encounters prompted San Francisco to pass the Caution Against Racially Exploitative Non-Emergencies (CAREN) Act shortly after the incident in New York City. Advocates have since called for other jurisdictions to adopt similar legislation.

Owens, although known for his brash personality in the NFL, doesn't have a criminal past and has not been publicly involved in an incident like the one that occurred on Wednesday.