Thanks, people who blessed me with great advice to ignore the Mummers 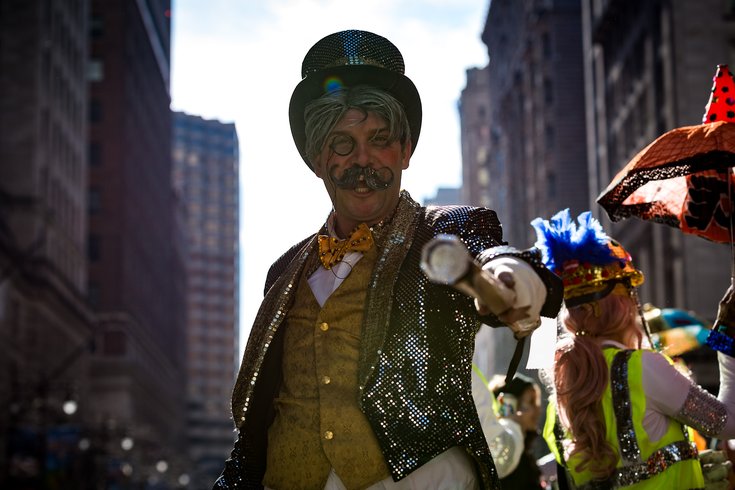 By “you,” I mean sequin-and-parasol enthusiasts who – elevating the level of discourse after previous criticisms of the event’s white-trash fringe elements – urged me to derp not watch the derp Mummers Parade derp if I didn’t like the derp Mummers Parade because derp we get it and derp you don’t and stop derp being mean because tradition is tradition even if it offends derp.

Fine. I put it on for a few minutes just to see if Howard Caplan got screen time for his Pizzagate mission.

And, while I didn’t watch long enough to see it come to fruition, he did!

That’s good. (Having interviewed him a few times in person now, he’s not the should-be-institutionalized lunatic others labeled him to be. That’s not to say I can vouch for his mission, for which I certainly cannot, but I cannot abide by blanket labels from those who never spoke to him, either.)

From what I’ve seen Monday morning, the Mummers Parade went better than in previous years.

By “better,” I mean drunks in costumes didn’t see the need to hide behind a “no derp PC derp” shield and chalk their visibly-urinated ignorance up to parody – or whatever the buzzword they really don't grasp is these days.

That’s good, too. I hope it continues.

But let this post serve as a thank you note (written on my day off, no less!) to the folks who urged me to just ignore the parade and let them be them this year.

It was relaxingly empowering to lay on the couch – in new pajamas after a few morning errands – watching football and movies, taking multiple naps and sipping a couple mugs of coffee with Bailey’s without the journalistic need to share the bad side of Mummery with folks unable to watch the parade from afar.

New Year’s Day 2017 was the favorite of the 40-plus ones I’ve spent in or near the city. I can’t thank those who – with or sans profanity – urged me to avert my eyes and mind from the Mummers Experience enough.

It was good advice.

Just don’t expect me to extend that courtesy to Diner en Blanc this summer. That for-profit testament to white-clothed and street-closing privilege will continue to get no quarter.