For 19 years, Chris Steinhagen was the first at traditional Haddon Township gathering 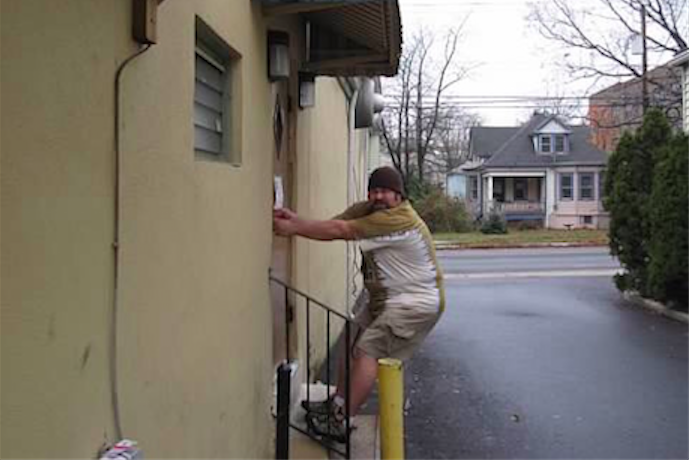 For 19 years, Chris Steinhagen was the first person in the door at Tom Fischer's Tavern for the Thanksgiving morning reunion/gathering. This year, friends will gather to remember the man who died in October after a five-month battle with kidney cancer.

The annual Thanksgiving-morning gathering at Tom Fischer’s Tavern has long been a time for revelry. There, friends catch up with friends they haven’t seen for years before heading off to the annual Haddon Township vs. Audubon football game or back home to eat with family.

It will feel a little emptier at the Cuthbert Boulevard watering hole this Thursday.

For the past 19 Turkey Days, 41-year-old Chris Steinhagen was the first customer through the doors at 9 a.m., even helping the morning crew take the stools off the bar before more customers arrived.

He loved it there.

He was beloved there.

Someone else will assume that mantle this week, though, as the affable, sports- and music-loving, bearded mainstay lost a five-month battle with kidney cancer on October 29.

“He never let the grass grow under his feet. He took advantage of being alive and led a great, great life for the short time he was here.” – Kim Steinhagen

The time from diagnosis to death was, in the words of his wife Kari-Leigh, “too fast and furious” to fully grasp yet. It was a shocking pace that left loved ones struggling for words a few weeks later.

It was such that some didn’t know he was sick before they learned of his death, as Steiney wasn’t the kind of guy who liked burdening others with his problems.

He wouldn't want this story to dwell on the diagnosis, either, so it won't.

As friends and family grieve and remember, Kari and others close to “Steiney” – as those who knew him, as I have since before high school, lovingly referred to him – eulogized him this weekend at his Thanksgiving locale of choice.

They’ll do the same this holiday morning because it would bring a smile to Steiney’s face, and will bring them closer to him in spirit.

That includes people like Mike Nawrocki, who was friends with Steiney for the past 27 years.

It was Steiney’s love of music that brought them together. He traveled to some 500 shows (everything from Phish and the Grateful Dead to Pantera). His many shirts from those shows decorated seats at his recent memorial service.

Nawrocki recalled Saturday mornings in line for concert tickets outside the Tower Records in Cherry Hill. And heading over to South Street in pursuit of obscure albums. And a road trip to the Rock and Roll Hall of Fame in Cleveland.

“When Chris and I were 16 years old, we went to our first concert: Van Halen. In the days leading up to it, we didn’t know what to expect. Once we got inside the venue, from the energy of the fans and the band to how loud the music sounded, we were hooked,” he said. “The music is what really bonded our friendship together.

“Today, when I listen to music that Chris and I liked, it sounds a little different. A little sad but a little sweet. I am glad I got to have all the experiences I did with Chris. He will always be in my thoughts.”

Aaron Phillips, a former co-worker, seconded that lasting legacy. What makes the loss so stark is that Steiney worked in pharmaceuticals.

Working in a variety of capacities, he took personal pride in packaging treatments, and managing clinical trials, for cancer patients. It was a mission of which he recognized the urgency of his work years before learning he would face the disease himself.

"He knew how important that was," Kari said. "He felt a great responsibility to make sure patients were getting those products. He was really vested in it."

Then, there’s Steiney’s little sister Kim who, six years younger than her brother, recalled youthful years of playful teasing back and forth before they forged a stronger bond. Her fond memories included musical experiences as well.

Though New Kids on the Block was her first concert, big bro then took her to a Rage Against the Machine show at the Electric Factory. There, he told her to stand against the fence near the sound equipment and not to wade into a likely aggressive crowd.

“He was my protector,” she said. “Without him, there’s a big gap in my life. It will never be the same. No one will ever replace that. There are no words to describe it except a ‘suffocating void’ because he wasn’t just my brother; he was my good and closest friend.

“He never let the grass grow under his feet. He took advantage of being alive and led a great, great life for the short time he was here.”

Kim shared how her brother complained of pain in his side near the end of May and, once doctors pinpointed the cause, they heard the dreaded diagnosis: stage four kidney cancer.

“We all definitely felt like he’d have more time. He didn’t want to suffer and one of the biggest struggles were times that he couldn’t do what he wanted to do,” she said.

She offered the caveat that he and his wife Kari continued living life to the fullest that circumstances permitted. In fact, they went to a Bruce Springsteen concert post-diagnosis. It would be Steiney’s last show; the concert shirt was a bittersweet symbol at the memorial.

“We met at work, just about 11 years ago, and I can say that we did more in that time than most people ever get to experience in their entire life because of the way he was.” – Kari-Leigh Steinhagen

Asked what he’d like total strangers to know about his late friend. “They missed out. He wouldn’t bulls*** you,” was his instant response.

“If you didn’t feel like doing something, it didn’t matter. He’d be on your doorstep saying, ‘C’mon, put your shoes on. Let’s go,’” he said. “He always had energy. Always wanted to go out. I remember when I lost my uncle and called him up, said I needed to go out and get a beer. He asked where and when, and he was there. He always put everybody else first, ever since we were little kids.”

“Right up to his very last breath,” Kari added. “That was him.”

Said longtime friend Michele Eife of being in the place that Steiney loved, "We came here after the services and there was a point that we were sitting there, and I thought he would have loved this. He would have loved everybody being here together."

Kari and Steiney had been together for a decade before getting married earlier this year. The ceremony was in the park near Cooper River, right by the willow trees.

After an ultrasound on May 28, doctors immediately sent him for a CAT scan.

“It was five months and one day from his diagnosis to his passing,” she said. “When I took him in (last month), it wasn’t a situation where I thought we wouldn’t be coming home.” 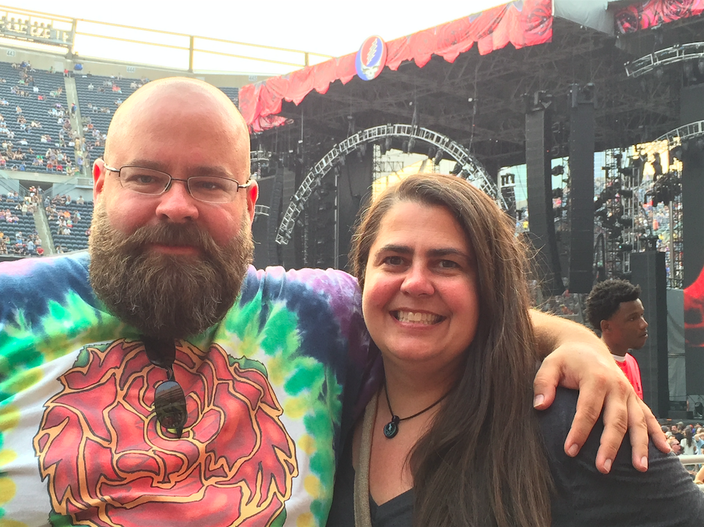 Chris Steinhagen and his wife Kari-Leigh travelled far and wide to go to a variety of concerts from a whole array of musicians over the course of their nearly 11 years together.

From the hospital, he called friends to apologize for not being able to make a party.

“I think he was still worried about everyone else: ‘As long as everybody else is going to be OK, I’m alright,’” she said. “We met at work, just about 11 years ago, and I can say that we did more in that time than most people ever get to experience in their entire life because of the way he was."

That meshed with who he was: Full of life.

“There’s such a presence about him that no matter where would go, people would have a tendency to migrate to him, whether it was because he had this great beard, or just because he looked like a good dude they could talk to,” she said,.

The couple went to three concerts (Phish, Jimmy Buffett and Springsteen) and an Eagles and Phillies game in recent months. Steiney was also a big sports fan, approaching Philly "four-for-four" status after trading in the Raiders fandom of his youth for diehard Eagles-dom in adulthood.

The memorial service, held in mid-November, closed with the song “Imagine,” a song that flooded the room with tears as it was special to the couple and one that Kari will carry forward in her life.

“There will always be a piece of him with me, and a piece of me died with him because of who he was,” she said. “I’d like to imagine that he’s at the great gig in the sky and all of his favorites are playing the best concert ever for him. That’s where my imagination goes, because he of all people deserves that show." 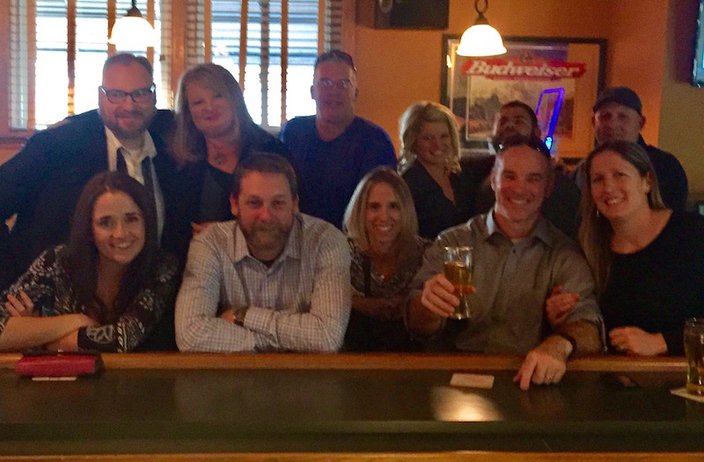 Friends and loved ones of Chris Steinhagen gathered at Tom Fischer's Tavern in Haddon Township, NJ after a memorial service for the 41-year-old who died from kidney cancer on October 29, 2016.