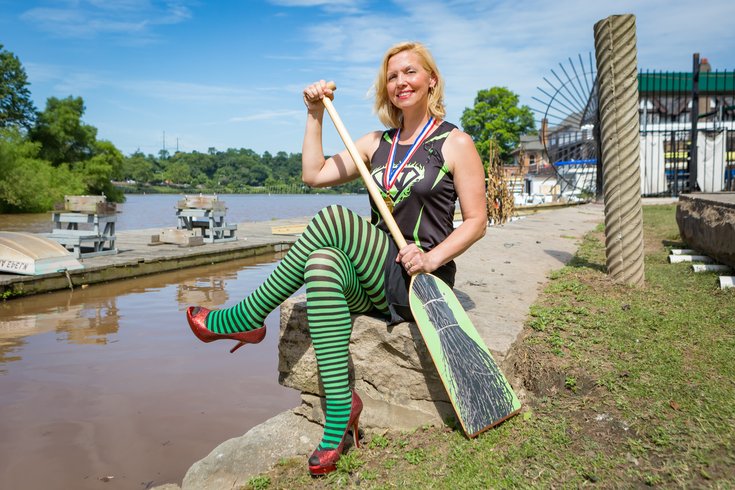 Megan Heyer, an emergency department and trauma nurse at Thomas Jefferson University Hospital, is president and founder of the Witches of East Greenwich dragon boat teams. “What I really enjoy about the whole thing is the camaraderie that comes from the organization," she says.

What do dragon boating and witches have in common? It might not seem like a lot on the surface, but for Megan Heyer, R.N., an emergency department nurse at Thomas Jefferson University Hospital, they help mak her nonprofit, The Witches of East Greenwich, so unique.

The Witches group is a New Jersey non-profit corporation that promotes community education, training, water safety and competition in the sport of dragon boat racing and raises money to support charities that benefit empowering women and their families.

The organization started with Heyer and her friends just looking for something fun to do.

In 2008, she was asked to do dragon boating as a teambuilding exercise for Jeff’s Emergency Department and when she mentioned it to a group of her friends they loved the idea and wanted to try it themselves.

A year later, Heyer organized about 40 women to compete at the Philadelphia International Dragon Boat Festival. They dubbed themselves the Witches of East Greenwich. Since then, the group has grown to about 200 women and nine boats. Their big race every year is the Independence Dragon Boat Regatta held in Philadelphia in June.

That regatta is hosted by the Philadelphia Dragon Boat Association, which helps fund Team USA Premier Women, Premier Mixed and Premier Open programs. Heyer and her fellow witches competed again in June and two of their boats medaled – one gold, one silver – in the Women’s B division.

“We just do the three practices offered by the race and compete against women’s teams who practice all year," Heyer said, "so we are pretty proud that we can kick it out in three practices.”

Members of the Witches of East Greenwich teams pose for a photo at the 2018 Independent Dragonboat Regatta on the Schuylkill River on June 2, 2018. About 200 women compete in the races.

FOR WOMEN, BY WOMEN

“My ladies love it, and look forward to it every year. It is a day about them,” said Heyer, 47, of Mickleton, Gloucester County, a mother of three teens. “They juggle so much taking care of their families, running their kids everywhere, and this is the one day their families come down and watch them participate in their sport.

“When the kids come down in their 'My mom is a witch' shirt, they couldn’t be prouder of their moms. It is a great feeling to be a part of that with my own children and to see women in my community experience that.”

She added: “What I really enjoy about the whole thing is the camaraderie that comes from the organization. We have women of all athletic abilities, ages and backgrounds and it is amazing to watch them come together and really work their butts off."

Feeling empowered through dragon boating, Heyer and her fellow witches are working to do the same for other women by raising money for charities in the Gloucester County area that focus on the needs of women and children.

The Witches raise funds from their Wicked wear, a golf outing and a Wicked Ball held on The Estate at Monroe in Williamstown in October. They decide as a group which two charities to support each year and award an annual scholarship to a high school female who embodies the Witches’ spirit. On average, they raise $10,000 to $12,000 a year.

THE POWER OF A NAME

Meyer and her ladies proudly called themselves witches, but what is in a name? When Heyer was first playing around with different names for her group, she knew she wanted something that was fun and sassy but also connoted power.

“Witches are magical, powerful and fun, and I thought since we lived in East Greenwich we could play off the name of the Jack Nicholson, Michelle Pfeiffer, Cher, Susan Sarandon movie, The Witches of Eastwick.”

Heyer is juggling management of the nonprofit as she attends graduate school to become a family nurse practitioner. But she has plenty of help, she said.

“You are only as good as the people you are surrounded by and I have an excellent team of women who support this organization. I like to think that I was just the fire starter that struck the match and the flame just runs itself.”