Amid honks, fireworks and countless iterations of the Eagles' fight song, a car flipped on South Broad 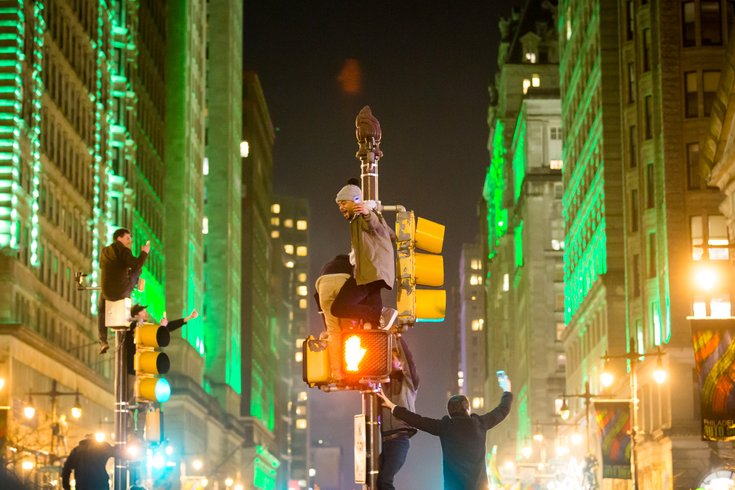 They spilled out of the bars and into the streets of Center City. They packed the intersection of Cottman and Frankford avenues in Northeast Philadelphia and gathered in Manayunk. And, of course, they darted up the steps of the Philadelphia Museum of Art.

The Eagles, at last, are Super Bowl champions.

And their fans basked in the moment as Sunday spilled into early Monday morning, filling the streets of Philadelphia – and celebrating all throughout the region. In the suburbs, crowds gathered in the town centers of Hatboro and Ambler in Montgomery County. 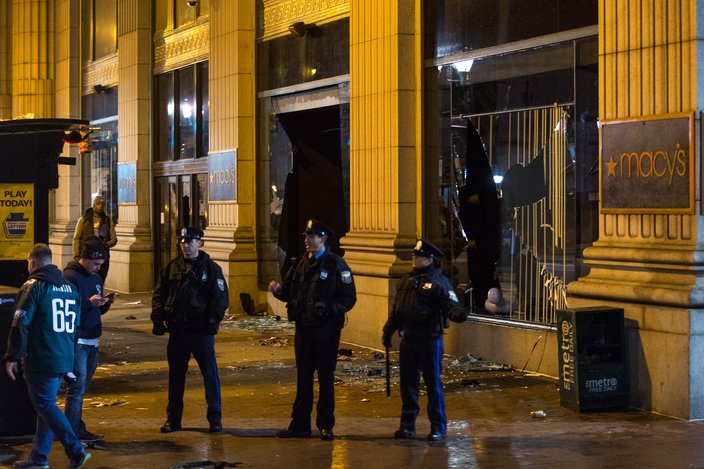 Windows on the Macy's Department Store in Center City were smashed during celebrations following the Philadelphia Eagles' win in Super Bowl LII on Sunday night.

There were high fives, hugs and more than a few tears. They shot off fireworks, honked horns and screamed Eagles chants. They climbed lamp posts, hoisted kegs and rode atop cars.

There were reports of small fires being set and a car was flipped in front of the Bellevue at South Broad and Walnut streets. And somewhere in the revelry, one Eagles fan took a bite of horse feces – at the urging of a group of onlookers.

Only three people reportedly were arrested.

"You could sense the weight of the whole city cheering when looking down (the Benjamin Franklin Parkway)," said Jeremy Samsoe, 33, of Brewerytown.

Mayor Jim Kenney encouraged fans to revel in the victory – a 41-33 takedown of the mighty New England Patriots in Super Bowl LII. But he also urged them to do so peacefully. 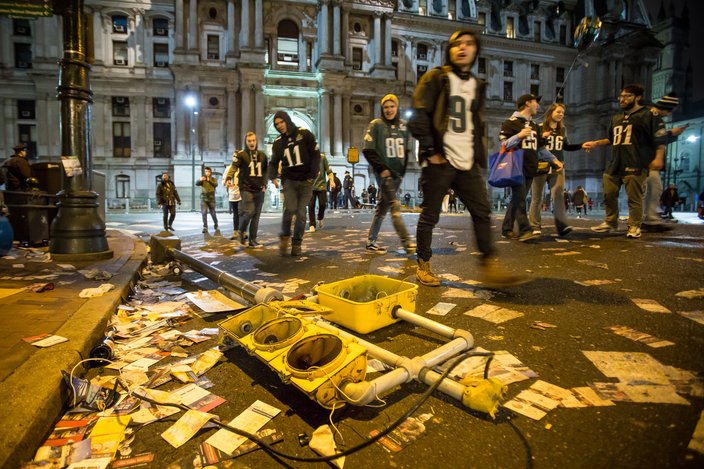 "We know you have waited years, some for decades, for the chance to crown your Birds as champs," Kenney said in a statement. "I urge everyone to celebrate in a way that is safe and respectful to everyone from neighbors to strangers. Go forth and celebrate, but do so in a way that will make Philadelphia shine."

The crowds – which totaled in the tens of thousands – delayed PATCO trains and forced SEPTA to reroute several buses. Police also blocked off several entrance and exit ramps to I-676.

This Philly cop is HYPE

But even the Philly cops couldn't conceal their excitement as people rushed into the streets in jubilation.

At the Art Museum, a group of Eagles fans circled the Rocky statue, posing for pictures and singing the Eagles' fight song. 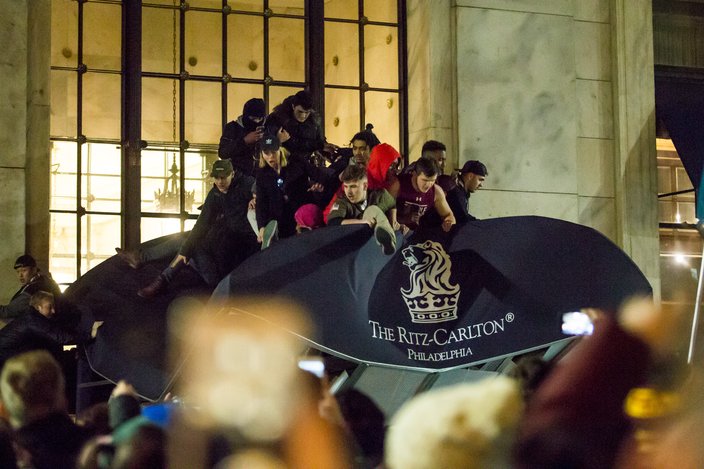 About a dozen fans celebrated the Eagles victory in Super Bowl LII on Sunday night by climbing onto a canopy at the Ritz Carlton hotel on South Broad Street in Center City. This photo was taken just before the canopy collapsed under their weight dashing them to the sidewalk.

Fans poured into Center City from all over, marching south from Temple University toward City Hall and north from South Philly.

The scene on South Broad Street was chaotic, though most fans were celebrating peacefully, despite the overturned car. A group of students at the Merriam Theater of Arts pulled out their brass instruments and played the Eagles' fight song from five stories above the crowd.

Five stories up, some students at the Merriam Theater of the Arts just broke out some brass intruments and led Broad Street in the Eagles' fight song pic.twitter.com/PdksYCxNQR

Down the street, in front of the Ritz Carlton hotel, about a dozen revelers were dashed about 20 feet to the ground when a canopy gave way under their weight. Others climbed atop the sanitation trucks that served as crowd barricades. Sometime after 1 a.m. someone chucked a brick through a window at A.C. Moore.

Around 1:30 a.m., mounted police began trying to clear the crowds by City Hall.

fans in philadelphia yanking down a street light during their #superbowl celebration #flyeaglesfly pic.twitter.com/vsIpre75jY

Thousands of fans also swarmed Cottman and Frankford, celebrating the Eagles' win until police began clearing out the area around 1 a.m.

Across the region, hundreds waited to score Super Bowl championship gear, set to go on sale shortly after the game ended.

In Willow Grove, hundreds of people lined up outside of Dick’s Sporting Goods – soon after Tom Brady’s last-second Hail Mary pass fell to the ground – to purchase shirts and hats and other merchandise. A similar scene was playing out at the chain’s store in King of Prussia.

Despite the victory, the School District of Philadelphia announced that school will be in session on Monday. But across the region, several districts announced delayed starts.

Details about the Eagles' Super Bowl parade will be announced Monday, the city announced. Fans have waited decades for the opportunity to see the Birds parade down Broad Street – and it would not be surprising if more people attend the Eagles' parade than the Phillies' World Series parade drew in 2008.