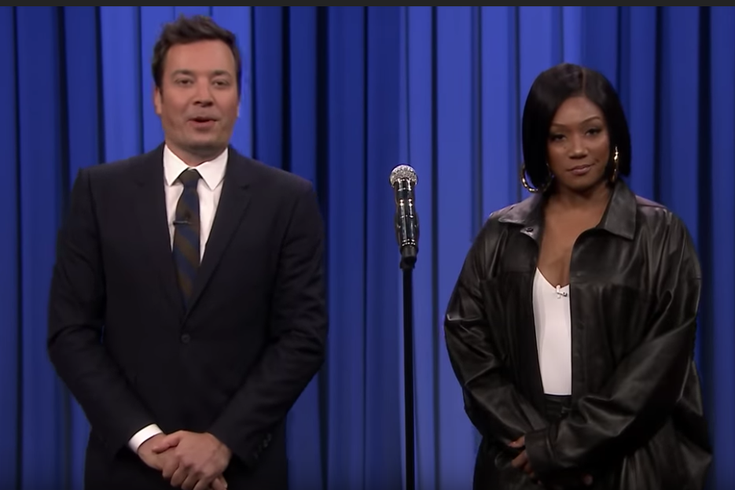 Tiffany Haddish appeared as a guest on "The Tonight Show starring Jimmy Fallon" on Thursday night. The "Girls Night" star competed against Fallon in a round of "Lip Sync Battle." Haddish brought some pretty intense moves to her performance and by the end it was pretty clear who was the winner.

Haddish looked almost ready to fight as Fallon begins to explain the rules, asking her to step off so he can go first. He performs Dee-Lite’s “Groove Is in the Heart” and poses moves similar to Lady Miss Kier's in the music video, though in a more "dad" sort of way.

Haddish steps up to the mic, throwing some moves as the music starts for “Afro Puff” by Lady of Rage. She lips syncs in style, giving it her all, and performs it without missing a beat.

A competitive Fallon seems a little perplexed and taken aback by her performance, saying, "You rode rough with your afro puff. I didn't like that The Roots were singing along with that. I was like, 'Whose show is this? Come on.'"

He readies himself and begins lip syncing to Post Malone’s “Psycho,” even putting ink on his face to resemble the singer's face tattoos. After his performance Fallon seems mighty proud of himself, but Haddish wasn't giving up.

She steps up to perform “Sex Machine” by James Brown. She moves the mic a bit closer to The Roots and the screen turns to black and white. Haddish moves her feet in a frenzy just like Brown, feeling it all the way through before a minor fall and The Roots cover her with a cape. Acting hurt, she soon recovers, pushing off the cape to finish with a bang.