Frisky delegates busy on phones in City of Brotherly Love 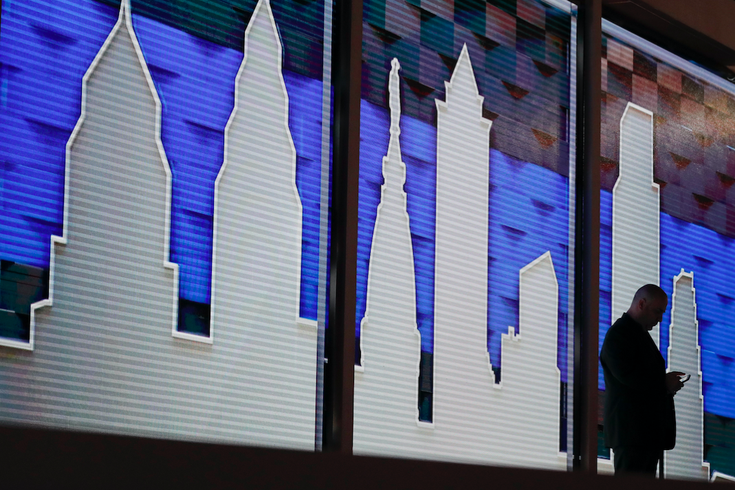 A worker looks at his phone during preparations for the 2016 Democratic National Convention, Friday, July 22, 2016, in Philadelphia. As Cleveland breathes a sigh of relief after protests during the Republican convention came and went without major chaos, eyes now turn to Philadelphia.

The Democratic National Convention has come and gone from Philadelphia: Zero arrests, a Sean Hannity mix-up and plenty of momentum for Hillary Clinton as the nation hits the home stretch of the 2016 general election.

Hundreds of swipes were taken at Donald Trump over the course of the DNC, but that doesn't scratch the surface of what happened on Tinder and Grinder in Philadelphia last week. This might as well have been a mini-Olympics, based on data released by the mobile dating ("dating") apps.

According to The Daily Mail, Tinder saw a 54-percent increase in activity in Philadelphia during the DNC. That spike paled in comparison to a 154 percent uptick on the gay dating app Grindr.

Obviously, the landscape of adult entertainment has changed dramatically with the evolution of online dating applications. This geosocial networking variant — Grindr first appeared in 2009, Tinder in 2012 — has turned convention on its head.

In the midst of the DNC, our Brian Hickey did a "barely scientific" but gloomily revealing investigation into the state of the strip club scene. On Tuesday night at Club Risque, just four miles away from the action in South Philadelphia, business was dead. Not even a barrage of social media promotion and an enticing $20.16 deal could lure people into a lap dance.

You can't beat free. And, as the Daily Mail's "convention insider" shares, "Rather helpfully there [were] novelty DNC condoms on sale outside the Wells Fargo Center. Nobody wants to wake up the next day 'feeling the Bern.'"

Thanks a lot, convention insider. Even that alpaca was getting around.

Philly shouldn't feel too badly about itself, though. The same phenomenon occurred in Cleveland earlier this month for the Republican National Convention. Strip clubs anticipated a good week but instead got torched by an 82 percent spike in Tinder activity and a 66 percent rise in networking on Grindr.

As a society, we're probably nearing the point where this sort of thing should no longer surprise us. Look what happens when it snows for a few days.

Fortunately, with this many people in town, the city as a whole got a boost. In contrast to last year's papal visit, the restaurant industry wasn't hamstrung by the desertification of a security perimeter. According to the Philadelphia Business Journal, Center City restaurants made out very well during a typically slow month.

While we've yet to see official numbers tallied on the DNC's economic impact, convention officials estimated prior to the event that it would be about $250-300 million for the greater Philadelphia area. Hotel liquor should make up for discrepancy beneath the balance sheets.