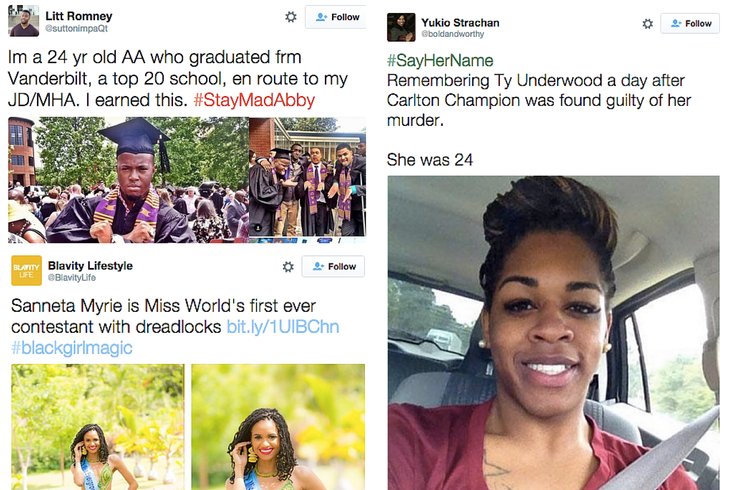 You had to be living under a huge rock on Twitter this year if you haven’t encountered the sheer brilliance, activism and often tongue-in-cheek perspectives of “Black Twitter.”

This collective force of nature from many black tweeters shouldn’t simply be seen as a monolith of all blacks on Twitter, but as a unique group of highly insightful and conscious commentators. In 2015, they broke news to the world faster (and sometimes better) than more notable sources.

Taking on everyone from Hollywood to the Supreme Court, here are the top 10 Black Twitter hashtags of 2015.

Earlier this year, Black Twitter showed the world how the childhood experiences of blacks in America is culturally different than others'. The above image is that of a “kool-cup,” a very sweet homemade frozen treat that was easier and more affordable to make than popsicles.

When you finally old enough to be in grown folks business & get asked your opinion. #ThanksgivingWithBlackFamilies pic.twitter.com/k1YiD70vLn

In a world where colorism exists, this hashtag proved to reinforce the narrative that all black skin tones are beautiful and should be equally embraced.

This year, black women such as actress Viola Davis, Attorney General Loretta Lynch, and athletes Misty Copeland and Serena Williams broke barriers in their respective fields. This hashtag celebrated their accomplishments and many more at a time when such achievement was crucial to recognizing diversity.

#OscarsSoWhite again? The 'conversation' is only as white as @THR wants it to be https://t.co/3ngqy144uc? pic.twitter.com/oGhC4imhnM

When the 2015 Academy Awards failed to nominate any black actors or actresses in any categories, Black Twitter made this hashtag go viral worldwide, further stoking discussions of diversity issues in Hollywood. Next year’s awards race doesn’t look too promising.

To see my personal friends #IfIDieInPoliceCustody tweet now that she is in custody .. she better be unharmed!! https://t.co/xwSOVG907q

Being #BlackOnCampus means you're beloved in brochures & "diversity" campaigns, but isolated & disregarded in campus access & equity.

After the racial backlash at Mizzou, black college students and grads across America shared their unfortunate experiences at PWIs (predominately white institutions) on Twitter worldwide.

Black Twitter took to task Rachel Dolezal, the controversial white local NAACP chapter president, on her problematic appropriation of blackness with a hashtag that challenged her notions.

#SayHerName Remembering Ty Underwood a day after Carlton Champion was found guilty of her murder. She was 24 pic.twitter.com/MiYla5sn6C

Although women of color played a significant role in creating #BlackLivesMatter, an overwhelming amount of the media’s attention focused on black men. This hashtag became a powerful movement for putting more women who have also been victims of police brutality at the forefront of consideration and justice.

Im a 24 yr old AA who graduated frm Vanderbilt, a top 20 school, en route to my JD/MHA. I earned this. #StayMadAbby pic.twitter.com/WAtTs9KB20

No hashtag this year showed how Black Twitter dominated social media more powerfully than this. Started as a way to counter the offensive remarks made during the recent Supreme Court case involving Abigail Fisher, a white woman suing the University of Texas on their affirmative action policy, it’s become a celebration of black excellence in places that often exclude such visibility.