Top pick Mickey Moniak 'very excited to be a Phillie' 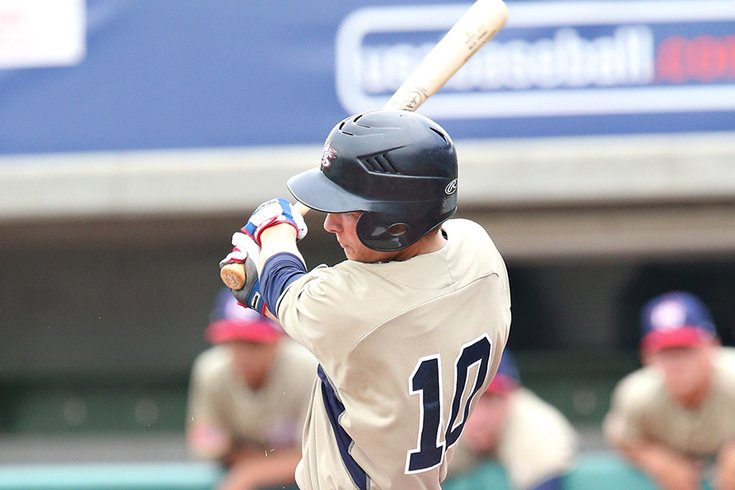 Mickey Moniak wasn't named after a Hall of Famer, but he learned to hit from one – through his grandfather.

Mickey Moniak may have a baseball name that rolls off the tongue, but it’s not even his birth name.

And although he considers Mickey Mantle his favorite all-time baseball player, it’s not the Hall of Fame player he is one degree of separation from and one who has influenced his own hitting approach, a tool that led him to being selected with the first overall pick in the 2016 draft by the Philadelphia Phillies.

“My grandpop (Bill Moniak) got drafted by the Red Sox out of high school in ’58,” Mickey Moniak said on Thursday night. “He was bonus baby before they had the draft. His hitting coach was Ted Williams for I don't know how long. It definitely influenced my game, my approach, how I hit and play baseball. So that's been huge in my development as a baseball player.”

Born McKenzie Moniak – his grandmother thought “Mickey” was “too slang,” although it’s what he’s gone by his whole life – the top pick of Major League Baseball’s draft was smiling through the phone during a conference call on Thursday night with the Philadelphia media.

So you expect this to be a very short process?

“Absolutely,” Moniak said. “I’m definitely looking to get out there as soon as possible. I’m just ready to get the professional career started and hopefully get up to Philadelphia as fast as I fan. But after graduation, hopefully, we’ll work things out to where I can get out there as quick as I can.”

Obviously, any teenager that realizes a boyhood dream on draft night – especially the No. 1 overall pick – is going to be as giddy as a toddler at Christmas on nights like Thursday. But here was a kid that was already thinking about stepping into the batter’s box at Citizens Bank Park a night before he’d walk down the line and collect his high school diploma at La Costa Canyon High School in suburban San Diego.

We’ll know a lot more about Mickey Moniak when he gets down into Clearwater to become acclimated in the Phillies system, and when he begins his pro career in the Gulf Coast League or short-season Williamsport and then makes his way up through the ranks. But first impressions, at least from a personality standpoint, were certainly positive.

In the weeks and months leading up to the draft, Moniak spoke with many people in the Phillies organization, including two of the most important people from the 2008 World Series team, former general manager Pat Gillick and former manager Charlie Manuel. Both work in the Phillies front office as advisors.

When Moniak began talking about his connection to Ted Williams, he almost sounded like Manuel in his ability to talk hitting – minus the West Virginia drawl, of course.

“The main thing he taught me that Ted taught him was mostly about approach, what you're looking to do at the plate,” Moniak said. “(If) it’s 0-0, the pitcher makes a good pitch on the outside corner, let them have it. (If it’s) 0-1, makes another good pitch outside corner or inside corner, let him have it. But once you get to 0-2, you have to get up on the plate and look to put the ball in play. The pitcher is never going to beat you. That's the main mentality. It's just you vs. him. That's definitely what he's passed down to me.”

Moniak learned his craft from Ted Williams, became interested in Mickey Mantle because of the name, followed Ryan Klesko with the Padres (dark days in San Diego baseball), and currently looks at Bryce Harper and Mike Trout as guys he enjoys watching “go about it.”

“I definitely just try to take in as much as I can,” Moniak said. “Just try to be a student of the game.”

The left-handed hitting Moniak has been compared to fellow Southern California area product Christian Yelich of the Miami Marlins. He’s a lanky center fielder that’s expected to be a better pure hitter than one with considerable power.

But it’s probably just a tad too early to become concerned that a kid who only turned 18 last month weighs in at 180 pounds. There’s no reason he can’t have success in the game if he fills out into a Chase Utley-type body type.

And his home run total in his senior season at La Costa Canyon High – seven – was seven more than he had hit as a junior. So he’s obviously still growing, still improving as a hitter.

“I'm going to be working as hard as I can and do anything necessary to move my way up and hopefully put on that Phillies uniform in Philadelphia,” he said on Thursday night.

Moniak has a commitment to UCLA, but it sure didn’t sound like that was going to be an option anymore. The Phillies have the second highest draft pool among major league teams this year and shouldn’t have a problem using some of that to bring Moniak aboard.

Frankly, they wouldn’t have drafted Moniak – over A.J. Puk, Kyle Lewis, Jason Groome, and all of the other names you have heard for months – if they didn’t think they’d be able to draft and sign Moniak at the right price.

“I let my agent handle most of that,” he said. “Hopefully, we worked something out for them to pick me. And it happened. I’m just very excited to be a Phillie.”

He hasn’t even signed and he’s already calling himself a Phillie. Sure doesn’t sound like a guy who will be negatively impacted by the pressures that come with being the No. 1 overall pick in a draft.

“It’s definitely a huge honor,” Moniak said. “First and foremost, you’ve got to look at it like that. The main thing about baseball and the main thing I like to do when I play the game of baseball is you can’t put too much-added pressure on yourself. In between the lines, the main thing is go out and win a ballgame. That’s your main focus. That’s all you’ve got to focus on.

“All the stuff off the field, it can take a back seat for nine innings. Focusing on the game definitely takes away that added pressure and focusing on winning and foremost would definitely be the main thing."

With the 42nd overall pick in the second round, the Phillies selected right-handed pitcher Kevin Gowdy of Santa Barbara (Calif.) Sr. High School. The 6-4, 170-pound Gowdy has a fastball in the 92-94 range and a plus slider he can throw on any count. Gowdy went 4-1 with a 1.59 ERA (10 ER, 56.2 IP), 93 strikeouts and just five walks during his senior season.