The June 5 Memorial fails to tell the whole story

Besides jailing two blue-collar functionaries, consequences for the disaster that killed six people have been terribly inadequate 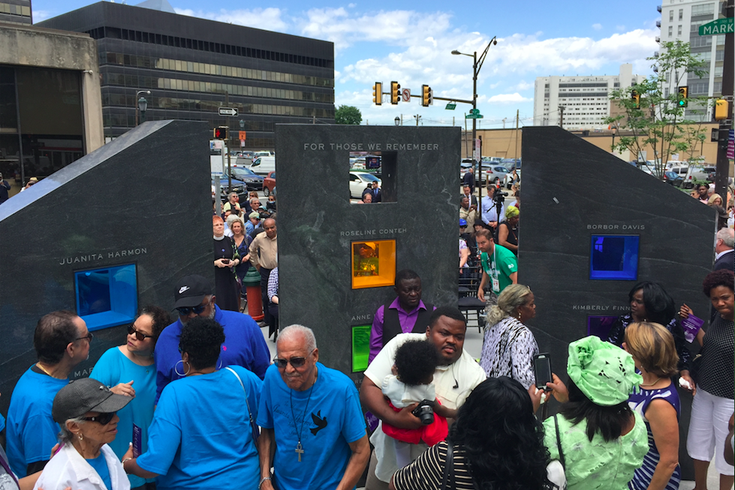 Survivors of those killed in the June 5, 2013 Salvation Army thrift store building collapse at the memorial unveiled at the site five years to the day later.

When reckless demolition work caused a wall collapse that destroyed a busy Salvation Army Thrift Store at the corner of 22nd and Market streets, the calamity exposed negligent actions by individuals and a much larger systemic failure.

But by commemorating this tragedy with a memorial at the site of the collapse — and not at the nexus of greed and governmental failure that ultimately led to it — I fear we missed an opportunity to properly focus attention on ensuring that such an event never happens again.

Today, the June 5 Memorial is pristine and polished and fresh in our minds. Like everything in the big city, someday, this carefully manicured sliver of city real estate will be just another place that has seen better days.

The city is full of formerly splendid parks that have become shabby after years of neglect. Many forgotten monuments serve to remind us that our civic ability to tend to physical assets and recall the history associated with places — even places as precious as memorials — is painfully finite.

Sadly, in the not-so-distant future, this meaningful place could become just another place.

The remarks etched on the wall of the June 5 Memorial conclude with this statement: "It challenges the residents and leaders of Philadelphia to remember what happened here and to always value human life above development."

The shortfall of the commemoration of this tragedy might be that, in memorializing the events as a failure that occurred in a particular place, we do not adequately confront the awful truth that the action (and inaction) of city officials and civic actors did value development before human life.

The existence of a contemplative space at a busy corner fails to confront the problem the memorial calls out. Unless we do much more to accept that collective responsibility, we are certainly doomed to witness future tragedies.

Of course, when it comes to taking credit for the memorial, the inscription proudly declares, "The June 5 memorial park is made possible by the generosity of private citizens and the City of Philadelphia."

An additional "Benefactors" section lists the CITY OF PHILADELPHIA in oversized, boldface text so we know who wants credit for commemorating the tragedy.

The memorial offers a physical statement that mistakes were made and that we recall them in this place. But, where is the acceptance of responsibility for the lost lives? The professing of shame? The declaration that a great wrong was done?

Instead of granite and plantings, we need a more dynamic memorial to ensure that tragedies like the June 5th collapse do not recur.

Besides the jailing of the two blue-collar functionaries who were ham-handedly following orders, the consequences for the disaster have been terribly inadequate.

Innocents lost their lives in the collapse, an inspector committed suicide in the aftermath of the disaster, two men lost their freedom and insurance companies paid some money. But, the careers of top city and civic officials continued without interruption. Not one individual was terminated or offered a resignation in response to their role in the tragedy.

At the memorial dedication, speakers lauded the progress the city has made in implementing systems to prevent future tragedies. Still, just one day before the dedication, a contractor died in another building collapse just a few miles from the podium where the platitudes were read.

Not the only time tragedy has struck

Instead of granite and plantings, we need a more dynamic memorial to ensure that tragedies like the June 5 collapse do not recur.

Instead of words chiseled on a wall that stands in the Market Street shade, the admonishment to "always value human life above development" should be inscribed on the doors of elected and appointed city officials and set on the desks of public-safety officials.

They should be affirmed by every inspector at the beginning and end of their work days.

They should be included as a header on city permits and should be acknowledged with a signature as a good-faith oath in order to secure approval for construction or demolition projects.

The 22nd and Market collapse was a horrific event but, sadly, the tragedy of June 5, 2013 was not the only time that we, collectively, failed to value human life.

A better memorial would properly condemn the guilty to a proper sentence of actively working to prevent future tragedies.

There is no memorial to the city judge, who was killed by a partial collapse of an unsafe building while walking on South Broad Street in 1997.

There is no memorial to the three women who were killed in the collapse of Pier 34 in 2000 after property owners failed to heed warnings of structural deficiencies.

There is no memorial to the 3-year-old girl who was killed when an improperly installed and inadequately inspected security gate crushed her at a water-ice stand on West Girard Avenue in 2014.

But even if provocative sculptures or poignant engravings marked the locations of all these tragedies, the truth is that the root cause of these disasters — the greed, avarice and callousness that encourage some to cut corners, and the expedience, accommodation and corruption of officials charged with protecting public safety btt turn blind eyes to the certainty of calamity — go unaddressed by static memorials no matter how profound.

The June 5 Memorial appears like a remembrance of those who perished in an earthquake or a flood, but make no mistake: the corner of 22nd and Market is a crime scene.

A better memorial would properly condemn the guilty to a proper sentence of actively working to prevent future tragedies.

Philadelphia doesn't need more pocket parks or plaques to remember our dead. We need more profiles in courage to stop wrongs from happening and protect the living.

Absent courage, we require a reminder before all our eyes every single day for every project to compel us to feel deep and enduring shame and to work to not allow another tragedy.