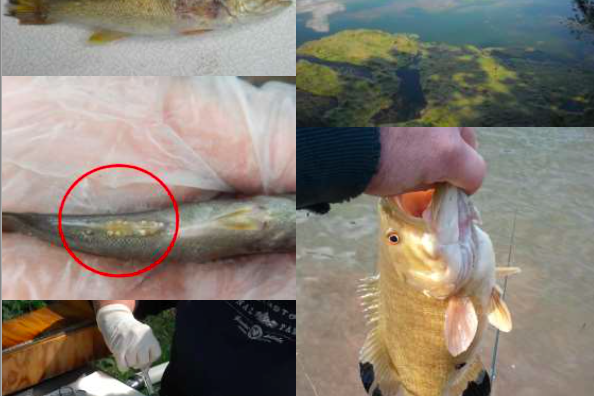 Photos from the Pennsylvania Department of Environmental Protection show smallmouth bass with lesions or black fins, a sign of disease.

Smallmouth bass in the Susquehanna River are likely being killed by a combination of toxic chemicals and disease-causing bacteria, viruses and parasites, the Pennsylvania Department of Environmental Protection has found.

The DEP and several other state agencies released findings from a multiyear study of the river on Monday, an effort that began after the fish's population started to crash in 2005.

Not only was the bass population going belly-up, but people found bass with lesions, sores and tumors. Scientists began collecting 30,000 water quality records per year to find the cause.

There were more than a dozen possible explanations for the fish deaths, from invasive species to algal blooms. In the end, scientists narrowed the list of 14 possible suspects to two categories identified as "likely causes."

The first category is herbicides and endocrine-disrupting compounds (EDCs). Herbicides are plant-killing chemicals used to control weeds, while EDCs interfere with the body's hormonal system, potentially causing birth defects and developmental abnormalities. There is evidence that some chemicals used in the production of plastics, such as BPA and DEHP, are endocrine disruptors, according to the National Institutes of Health.

Researchers found relatively high concentrations of EDCs and herbicides at sample sites. They also found more fish with intersex characteristics, a sign of hormonal disruption. However, the report warned that "evidence is weak due to the low number of samples and sampling years" and recommended more research.

The second category is parasites and pathogens, defined as any bacterium or virus that causes disease. However, researchers believe that pathogens alone aren't killing off the fish – instead, there may be a larger force at work that weakens immune systems, causes stress and makes fish more prone to disease and infections in the first place.

"This study does not identify a single smoking gun, but it does point the way toward likely causes, which we will continue to pursue," said DEP Secretary John Quigley.

Environmental agencies still need much more data to find a definitive cause for the population crash. The DEP said that it would focus on finding the source of those EDCs and herbicides.