Travis Pastrana bringing a different kind of 'Circus' to town 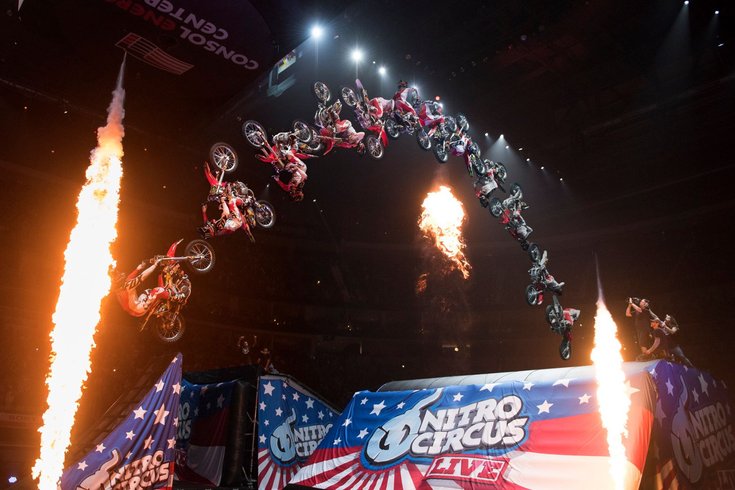 A sample of what you'll see during the Nitro Circus show Friday night at the Wells Fargo Center.

Sometimes, if you want to walk again, you have to be willing to break both of your ankles first.

That's the reality in the dangerous world of action sports, specifically motocross. And for Travis Pastrana and his Nitro Circus crew, making that decision -- they have just a few seconds in the air to avoid disaster -- is the only way to stay alive.

“Sometimes you’ll have three and half or four seconds in the air," Pastrana explained in a recent sit-down interview with PhillyVoice. "And that four seconds, you remember every smell, every sound — nothing else in your life matters...

“And you have to make a decision on how to make it hurt the least, which is really fu***d up for most people. If you stay on the bike, you’re like, ‘I’m going to break my neck; I may die. But if I jump off and do it like this and do this and do this, I’ll only break my ankles.’ And most people can’t make that decision — they can’t make decisions when the outcome's always bad. But you have to make tough decisions, when time slows down like that, to make it the best it can be.”

It takes a special kind of mental toughness just to attempt a jump of any distance on a dirt bike. And, apparently, an even rarer type to make a career out of it. When it comes to the 11-time X Games gold medalist, however, it was a decision he made back when his own mortality was an afterthought.

Both of Pastrana's parents raced motorcycles and as a boy growing up in the Maryland suburbs, he would try his best to keep up with his uncles and older cousins. But when you're the youngest of the bunch, you need to do a little more than "keep up."

"I was kind of the smallest one in my family," Pastrana, who turned 32 on Thursday, admitted. "And the only way I could keep up with my older cousins — who all ended up being boxers or all-American in lacrosse — was with a motor or by jumping off of something higher than they could jump off. So I kind of found that I was really durable and that action sports fit me.”

His parents, like most good parents, made sure their son had his priorities straight. After all, his father, Robert, had more than a little experience in the finer arts of discipline — he's a former Marine Corps drill sergeant. And although it was an expensive endeavor, they found a way to make it work. Not because they saw it as a long-term investment that would yield an outrageous return, but because they could see how much their son loved to ride.

“[My parents] literally were like, ‘Hey, do what you love. If you don’t love it, do something else. We can’t really afford this, so if you’re not really loving it, do something else,’" Pastrana recalled. "So they always encouraged me to kind of follow my heart, hoping that it would lead me out of motorized sports, which would be cheaper."

But in 1999, at just 15-years-old, Pastrana was invited to compete at X Games 5, ESPN's Olympic-style competition for action sports, in San Francisco. For the first time ever, MotoX Freestyle was added, and Pastrana took home the gold.

His score of 99.00 is the highest score ever recorded in the event.

This began a run of three straight MotoX Freestyle golds and four over the next five years. The only year during that span (1999-2003) in which Pastrana failed to win the gold was 2002, when he was sidelined due to injury and was unable to compete.

Unfortunately for Pastrana, injuries were a common theme throughout his early career. But those injuries, at least the less-serious ones, allowed him time to work on another hobby that would eventually become a career: driving.

"Every time I would get hurt, I would drive cars or go-carts or whatever," Pastrana said. "A broken wrist meant you couldn’t ride, but you could drive."

And that's exactly what he did.

From rally cars to NASCAR, and even monster trucks, Pastrana's has driven them all.

“Everything’s different," he explained. "And that’s what’s awesome about it. I feel like most of the time, if you’re good enough to do what you love, eventually you no longer love what you do. For me, I’ve been able to mix it up enough where I’m still very passionate about it every day. And that seems to be key in being successful in anything.”


But ask him to pick a favorite — aside from the bikes — and, well, that's a little complicated.

“Just to jump in, monster trucks," Pastrana said, already breaking them down into categories. "Two thousand horsepower. You can jump them — never had whiplash so bad in my life — but just in the air, you’re like strapped in. I felt so claustrophobic, but so awesome at the same time. You feel like a man in that truck.

“You got a rally car, that’s zero to 60 in 1.8 seconds, so it feels like a dragster. You can do anything with it. And then NASCAR, that’s the biggest pile of s**t I’ve ever driven in my life, with all due respect. They have a lot of horsepower, but no handling capabilities, and super fast. So it’s probably the hardest thing I’ve ever drove. And it’s silly, because it looks like they’re just driving around in circles. In the rally car, you’re always sideways, your lock-drifts or whatever, so that seems like it’d be more difficult. But the cars are so easy to drive, comparatively, to a NASCAR.”

"Almost every show there’s someone that lands a world’s first, something that’s never been done before. And that excitement really translates to the crowd."

That's the same type of mentality Pastrana brings to Nitro Circus. Because the show is always "evolving,"  there's always something different. Really different. You name it, and they've probably tried to jump it.

“There’s this guy going down [the ramp] on a penny-farthing bicycle, and we thought, ‘Oh, that guy will never be able to make the jump,’" Pastrana said, laughing. "And now he’s doing front flips on like, you know the little weak rear wheels and he’s sitting way up high. It just evolves.”

The show has evolved on a macro level as well. It began as a television show on MTV, premiering in 2009. There was also a movie, "Nitro Circus: The Movie 3D" released in the summer of 2012, the same year they began touring. Since, the show has been airing as "Nitro Circus Live" on MTV 2.

And even after all those performances, you'll rarely see the same act twice.

"Almost every show there’s someone that lands a world’s first, something that’s never been done before," Pastrana said. "And that excitement really translates to the crowd. Plus you’ve got the pyro; everyone loves the clowns; everyone loves to see crashes — at least everyone I know does.”


Despite all those "world's firsts" and crashes, the show is surprisingly safe. It's been designed that way. But that safety doesn't come at the expense of entertainment.

“We take out as many variables as possible," Pastrana added. "We are as safe as you can possibly get. But at the end of the day, I think people still like Nitro Circus because they know they’ll see the best in the world pushing the limits."

"It’s always the kids that want to come, usually the boys in the families. But it’s the parents, and even sometimes the daughters, that leave saying, ‘This was so much better than I expected.'"

It's impossible to completely eliminate the risk of injury, especially when you're constantly trying to make the ramps steeper and the jumps higher and longer. That's one of the reasons Pastrana has limited the number of tricks he performs.

"Wake up every morning with a passion. Do what you do because you love it; there’s no amount of money worth risking your life for."

The other two, much smaller reasons come in the form of his daughters Addy, 2, and Bristol, who was born in February of this year. Whether they take after their mother or their father, they already seem destined for a future in action sports.

That's because Pastrana isn't the only X Games gold medalist in the house. His wife, who he proposed to during a Nitro Circus Live show in June of 2011, is professional skateboarder Lyn-Z Adams Hawkins.

“I definitely think their mom is more passionate in hoping they take up the action sports lifestyle," Pastrana said. "But I hope they take the action sports mentality. Wake up every morning with a passion. Do what you do because you love it; there’s no amount of money worth risking your life for.

"But if you’re so passionate about it — and just to grow up around this Nitro Circus crew, where every single person is just full of life and passion and wakes up every day with a big smile on their face. I hope [my daughters] take that and realize that — if you like desk jobs or you like art museums or horses or whatever — if you love it, that’s what you should be doing."

When you talk to Pastrana, it's clear he loves the career he's chosen, broken bones and all. But like the Nitro Circus show has evolved, so has it's frontman.

Nowadays, an injury could mean missing more than just the next competition.

“I want to do the best I can for my family and for the people around me," Pastrana said. "I don’t want to kill myself or be too hurt to play with my kids when they grow up. But I want to have the most fun and be the most passionate about life that I can and if that includes riding — even if it means people telling me, ‘You’re not the best anymore’ — I’m alright with that."

With a resume that speaks for itself, Pastrana seems comfortable playing the father role -- both in life, and at work.

“Right now, my job is to make the ramps bigger, safer, more fun," he said. "And I’ll go out and play with the guys while we’re on the airbag. Then they’re like, ‘Someone’s got to take it to dirt.’ And I’m like, ‘Have at it, guys.’ That’s where I draw the line.”

After a career built on making the tough decisions that most people can't, the kind where neither outcome is for the best, Pastrana's had to make an even greater one. He's given up part of something he loves -- at least the most extreme portion of it -- to ensure that he doesn't lose something that's come to matter a whole lot more, his family.

Plus, that leaves plenty of time for him to dream up the next Nitro Circus stunt.