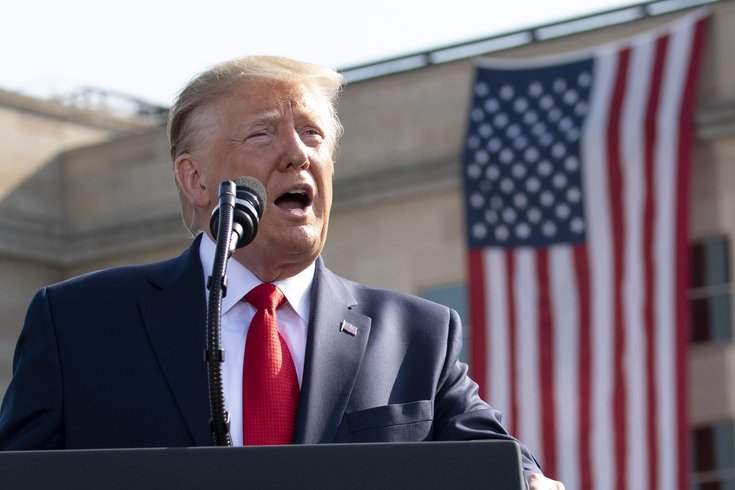 President Donald Trump's re-election campaign is suing New Jersey over Gov. Phil Murphy's plan to mail every registered voter in the state a ballot for the November election.

The federal lawsuit says Murphy's plan will lead to voter fraud in the upcoming presidential election, a baseless claim that President Trump has used as leverage in his argument against providing more money for the U.S. Postal Service, which would pay for the expanded use of mail-in ballots because of the COVID-19 pandemic.

The Republican National Committee and the New Jersey Republican State Committee joined the Trump campaign in filing the suit on Tuesday.

"In his haste, the governor created a system that will violate eligible citizens' right to vote," the lawsuit says. "By ordering universal vote-by-mail, he has created a recipe for disaster. Fraudulent and invalid votes dilute the votes of honest citizens and deprive them of their right to vote in violation of the Fourteenth Amendment."

The Trump campaign's entire complaint is available to read at the end of this article.

In an attempt to support its case, the Trump campaign lawyers cited a special election held in May in Paterson, New Jersey, claiming that issues of fraud lead to approximately 800 ballots being thrown out. And Trump has referenced the situation in Patterson himself at press conferences and on Twitter, but he is conflating the facts of that situation.

Around 20% of ballots in the Patterson election were tossed because they were improperly filled out, not because they were fraudulent. Election officials contend that those ballots being flagged and rejected is evidence of safeguards in place to prevent voter fraud actually working.

Gov. Phil Murphy announced plans to shift the upcoming election to mostly vote-by-mail options due to the ongoing threat of COVID-19 in a briefing on Friday.

Ballot drop-boxes, a limited number polling places, and prepaid postage on all mail-in ballots mailed to voters will all be in place for New Jersey's Nov. 3 election to help ensure voters' and poll workers' be safe amid the public health crisis.

The Donald J. Trump for President campaign has filed a similar suit against the state of Nevada following its decision to also send mail-in ballots to all registered voters in that state.

Trump has said he opposed the additional funding for the post office that would be needed to expand the vote-by-mail process for the November election, though he also has said he would sign a bill that included the additional money for the mail. Democrats say funding is needed for the USPS, which is both struggling financially and taking on increased volume of mail due to the shift to mail-in ballots in recent primaries and the upcoming election.

The state of New Jersey is bringing a lawsuit against the USPS in an attempt to protect the agency against Trump's attacks. New Jersey Attorney General Gurbir Grewal announced the lawsuit Tuesday, which was joined by attorney generals in Massachusetts and Pennsylvania.