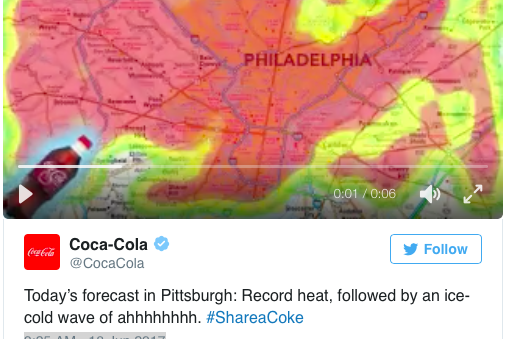 Coca-Cola targets tweet at Pittsburgh residents with a map of Philadelphia.

It's hard being a soda company these days. Pepsi failed miserably trying to make a commercial that fused themes of social justice, celebrity, unity and refreshment. Then they came up with Pepsi Fire and people were even less enthused. Now you've got more cities taxing soda, public health cramping profit margins and mounting attacks on the illusion of diet soda.

On Monday, it was Coca-Cola's turn to take the heat, when all the company wanted was to help people beat it.

It started with this seemingly innocent tweet intended for the parched residents of Pittsburgh.

As you can see, the territory depicted in this map is not Pittsburgh, but Philadelphia and the surrounding area. Not that we couldn't use it here too. It's almost 90 degrees, muggy as can be and about to pour.

In any case, Twitter jumped all over Coca-Cola for the error.

Jesus, the map even says PHILADELPHIA. How hard can this be?!?

@CocaCola is this some sort of joke or something? Last time I checked, Pittsburgh isn't Philadelphia pic.twitter.com/5OIQUzD5Pw

You realize that's a map of Philadelphia right? I predict a decline In sales of #CocaCola in the #Pittsburgh area in the near future!

IN WEST PITTSBURGH BORN AND RAISED, ITS NOT PHILADELPHIA SO I GOTTA GO OUT OF MY WAY, FILLING OUT, CHECKING, COPYING THESE FORMS

Ahem... "I was elected to represent the people of Pittsburgh, not Philadelphia."

That awkward moment when your intern doesn't know the difference between Pittsburgh and Philly, and how different the two cities really are.

So is it Always Sunny In Pittsburgh?

Even if you knew Pittsburgh from Philly your sugar loaded chemical concoction does nothing to quench thirst. Water and beer for me numbnuts.

I hate @pepsi but after this insult to the #CityOfChampions I just may have to switch it up now. Apologize to Pittsburgh! 😂

The worst part about this, for us, is that Coca-Cola's mistake turned into Pittsburgh people ragging on the Flyers.

Pittsburgh is the much better sports city

the difference is pittsburgh knows how to win. philly not so much

It's ok @CocaCola. Be glad your drink comes in bottles. Philly hasn't had a Cup in town since 1975z

In a statement obtained by Pittsburgh Post-Gazette reporter Joshua Axelrod, Coca-Cola followed the classic method of deflecting a public gaffe: reiterate the point of the campaign while downplaying the mistake.

"We sincerely apologize to our loyal fans for using a Philly map in our recent tweet. To our fans in both cities, we promise this error has been corrected," the statement reads. "This summer we are exploring innovative, adaptive technologies to serve up personalized content to our fans when the weather heats up, and remind them there's nothing better than sharing an ice-cold Coke. In this case, our map accidentally missed the mark."

Next up, Dr. Pepper Snapple Group.