Twitter reacts to Eagles clobbering of Sam Bradford in Philadelphia 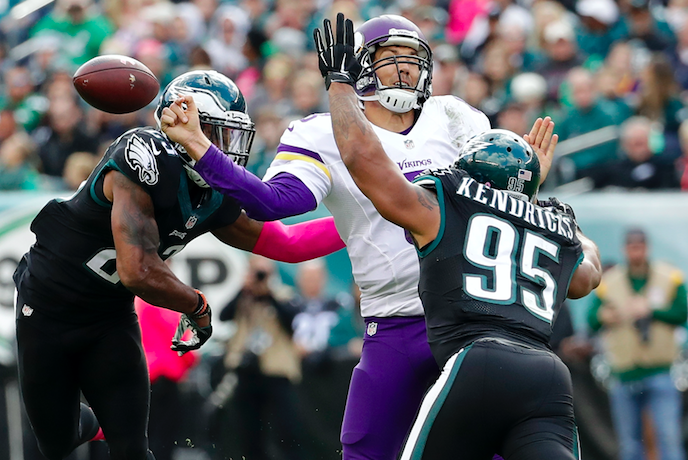 Minnesota Vikings' Sam Bradford, center, fumbles the ball against Philadelphia Eagles' Mychal Kendricks, right, and Rodney McLeod during the first half of an NFL football game, Sunday, Oct. 23, 2016, in Philadelphia.

The Eagles got a much-needed win at home on Sunday, stifling the Minnesota Vikings for four quarters and sacking old friend Sam Bradford six times — with four fumbles — on the way to a 21-10 victory. At 4-2 and with a date against the Cowboys next Sunday night, the Eagles are in good shape to reseat themselves at the front of the pack in the NFC East.

RELATED ARTICLE: Handing out 10 awards from the Eagles-Vikings game

For Eagles fans, it was a strange game to weigh out the pros and cons of the Bradford trade (one he requested, let's not forget). Statistically, Carson Wentz had a bumpy but efficient game, throwing 16/28 for 138 yards and a touchdown. He also threw two picks, bringing his total to three on the year against eight touchdowns.

But when it comes to vindicating Bradford's ticket out of town, all Eagles fans needed to see was a win. Here's what Twitter had to say about Bradford's bruising return to Philly.

That's what Sam Bradford get for taking 11 Million from us to practice and play in preseason.

Did anyone REALLY think a team with Sam Bradford as QB going to stay undefeated?

Sam Bradford played very poorly at @LFFStadium today. Stop me if you have heard this one before... #Eagles

Eagles destroyed Sam Bradford. I couldn't have scripted it better myself. (And I have, in my head, many times.)

"I am bad and now everybody knows that I am bad." -Sam Bradford, post-game press conference.

Wow...look at that.... #SamBradford finally won a meaningful game for the Eagles...

"Sam Bradford will be seeing green in his sleep" 😂 oh Troy Aikman you're silly pic.twitter.com/iTqufuYEsL

Sam Bradford suffered his 1st loss as a #Viking today. It is with a heavy heart I post these historical photos, honoring his godliness. pic.twitter.com/4r64pIkvGK

In an alternate universe, Sam Bradford is sleevelessand the #Eagles are 2-4 pic.twitter.com/JUfCPlQLgo

defensive player of the game for the Eagles is Sam Bradford

When Sam Bradford finally leads Philly to a win. pic.twitter.com/65wwjk8QM8