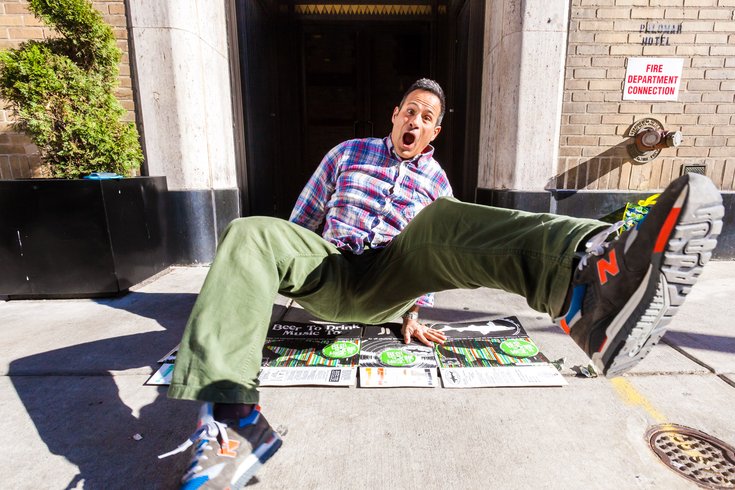 It's 9:30 a.m. on a Tuesday, and Dogfish Head Brewery founder and owner Sam Calagione is break-dancing on Sansom Street. Why?

In short: Why not.

Odd as it may seem to a passerby (and he does elicit some looks), Calagione's adventurous attitude -- whether break-dancing on Sansom or tossing scrapple into an ale -- is what's paid off for the 46-year-old writer-turned-brewer who long ago established himself as the cool uncle of the craft brewing industry. He founded the Milton, Del., based brewery in 1995 with his wife, Mariah, operating out of a Delaware restaurant with the lofty and then-unheard-of goal of sprucing up brews with culinary ingredients.

But, to his own admission, that was then, and this is now. Last month, he put out his third book, "Off-Centered Leadership," which focuses on what it's like to run a mid-sized business that's not quite a mom-and-pop operation anymore, but maintains the same flavor. Ahead of his book signing from 5-8 p.m. at Fergie's Pub Tuesday evening, he chats about enduring his business 21 years in, which seasonal ales are in the pipeline and his surprising array of Dogfish side projects.

What inspired this book? You’ve written two others before, so how is this one different?

So my bestselling book is ["Brewing Up a Business"]. With two craft breweries opening every day in America, a lot of people are finding that book to read as they consider going professional after their love of home brewing, or whatever. But I started getting requests from people to perhaps do a book focused less on the startup, and instead what it’s like to run an established company. And so we’ve grown from the smallest brewery in the country to now Top 20 out of 4,000 breweries, with 260 people working on our company across beer, food, distillery, merchandise and the hotel.

So this book is more about what it’s like to be a leader and transition from one who wears a ton of different hats -- an entrepreneurial leader -- to a leader of a mid-sized company, where much of your work is inspiring other leaders to join on your journey and finding leaders who have complementary skill sets to your own, that way everybody has clear roles in the company. And that’s been our journey at Dogfish Head. A lot of the book is about the focus on what I’ve learned about the good karma that comes with collaboration instead of competition, both internally and externally as we collaborate with other companies.

What's an instance where it paid off that you were collaborative, when you could have been competitive?

Anytime we choose to do a collaborative beer with another brewery. That’s counterintuitive. In most industries, you don’t have people who are literally competing for shelf space, combining their DNA and introducing each other’s audience and followers to their technical "competitor." But the craft brew industry was founded on this spirit of altruism and mutual support, because even since 1980 when Sierra Nevada opened – what I date as the start of our movement – those first-generation breweries helped each other. And I think that ethos has been brought into the entire movement in the past 35 years.

"But [Anheuser-Busch InBev is] still trying to convince the consumer that those breweries have stayed the same, that they’re still these indie little breweries. And that's not the case at all."

In the last year, we’ve done collaborations with Burley Oak, a tiny little brewery 30 miles from our brewery in coastal Delaware, but also did a collaboration with Sierra Nevada, a brewery four times our size. So those opportunities to prove that a rising tide floats all ships are critical, because while craft beer is having a zeitgeist moment and growing, collectively all the 4,000-plus small, independent, American-owned breweries, including Sam Adams and Yuengling, share about 12 percent market share. One major international conglomerate, Anheuser-Busch InBev, controls about 58 percent of America’s beer world. Something is wrong with that picture.

Does that concern you?

Yeah, it concerns me. They’re a public company. Their priorities are different than ours. Ours is beer or creativity first and making money second. Theirs is all -- legally mandated, the No. 1 priority has to be maximizing shareholder value every quarter. That’s a different perspective and, obviously, it makes them more ruthless and competitive. But that’s bleeding into the craft segment as they're buying out what were once true, indie craft breweries– Goose Island, Blue Point, Golden Road. But they’re still trying to convince the consumer that those breweries have stayed the same, that they’re still these indie little breweries. And that's not the case at all. 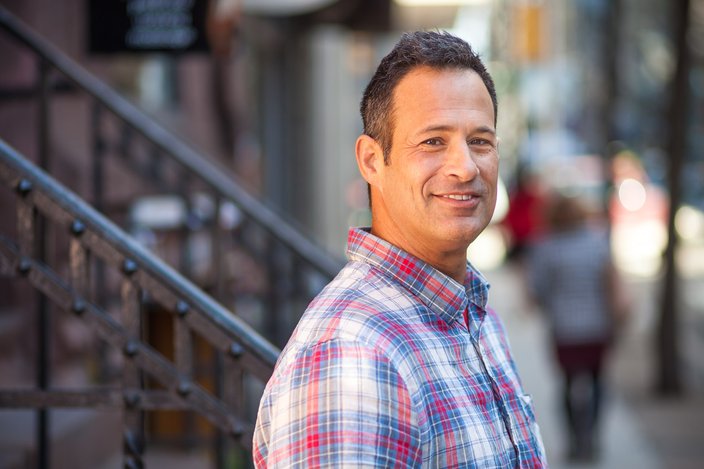 Tell me about these other projects you have going on: the CD, the inn, the magazine, etc. What's the motivation there?

With 4,000 craft breweries out there it becomes blurry to keep your brand distinct, in a world where there are 3,999 logos floating around in the industry next to yours. Beer is the heart of our company, the big organ that pumps out what we do coast to coast, but the soul of our company is all our combined businesses. We were a food business from the day we were a brewing business – we opened our first brewery in a restaurant. We wanted to be the first brewery that focused on the entire landscape of culinary ingredients around the world to add to beer, instead of focusing on hops, yeast and barley, and it’s cool to see thousands of breweries now painting outside of that "tradition." But when we started there was nobody else really focused on that. It made it hard for us -- the first few years, we were looked at as heretics, weirdos and jerks for screwing with tradition. But we were able to establish that sort of niche within the greater craft-brewing niche, so we wanted to find other complementary industries to put that off-center thumbprint on. We opened our first distillery 13 years ago using culinary ingredients to make spirits and opened our hotel two years ago, which is the first full-service, beer-themed hotel ...

These complementary businesses are like conduits to bring interesting, creative people into beer who may not have found us if all they cared about was beer. I’m also executive editor of a magazine called Pallet, and it’s like McSweeney’s or the New Yorker to some extent -- long-format stories meant to be read while drinking a beer. We’re trying to find interesting ways into that experience that keep us unique in an increasingly crowded marketplace.

Your book signing is at Fergie's Pub. Any personal connection there?

The craft brew industry was founded on this spirit of altruism and mutual support, because even since 1980 when Sierra Nevada opened – what I date as the start of our movement – those first-generation breweries helped each other. And I think that ethos has been brought into the entire movement in the past 35 years.

The first day I ever sold a bottle of beer outside of Delaware, I drove my pickup truck to Philly, dropped my pallets off at the distributor, took a bucket of cold beers around, and the first place I stopped was a place called Copa Too, and I gave it to the guy behind the bar, who said "Yeah I’ll take a keg of each." And that guy was Tom Peters, who was then the manager of Copa Too. I was like, "Oh ****, selling beer is going to be easy! I sold two kegs on my first time out!" And then it was 5 years of hand-to-hand combat trying to keep our company from going bankrupt in the first 5 years.

So, Philly holds a dear place in my heart. I remember being in my late 20s, leaving Nodding Head, and I had a few beers, had taken about a half-hour to wait, but I told people I was driving back to Delaware. And Fergie said, "Oh, that’s a really cool keychain, Sam. Can I see it?" And I showed him my keychain and he took it and put it in his pocket. "I know you’ve been drinking and I’m not letting you drive. You can sleep on my couch or your friend’s house up here." So that’s the kind of **** Fergie is legendary for. Awesome sense of humor, but also really cares about the beer community and its members.

Any beers you're working on that you’re excited about?

So, we opened this seafood restaurant called Chesapeake and Maine [in Rehoboth] two weeks ago, where 100 percent of seafood comes from those two regions. A lot of folks don’t realize it, but 91 percent of seafood sold in American restaurants does not come from America or our coastline. It comes from overseas. That has both freshness considerations and carbon footprint considerations. But our goal is to source all our seafood from those two regions, and we have two nautical-themed beers we serve there – one is our Chocolate Lobster, which is a porter made with cocoa nibs and Maine lobsters we crack open in the boil, from our best friend up in Maine who is a lobster man.

And we also have one called Seaquenchale that I’m excited about -- it's going to come out in bottles this summer. We brew in sequence – we first brew a Kolsch, which is a nice, friendly pH environment to grow the yeast in. Then, in sequence, we brew a thread of gose -- the oyster men from the Chesapeake get our oysters, but also buckets of saltwater from the mouth of the Chesapeake. And we boil down the saltwater and make our own salt for the gose from that. So we brew the gose, add that to the Kolsch and then third we brew a Berliner Weisse thread that's 25-percent fermented from lime juice, so the last two are kind of acidic, and with the Kolsch we combine them into this sequence ale, which is sort of a Gose salt-and-lime hybrid. That’s available at Chesapeake and Maine now, but will be out in Philly in bottles in a few months. It’s a fun one.

There's also [the Belgian tripel] Beer to Drink Music To, on shelves in Philly. And so is Romantic Chemistry, our spring seasonal.

... Our fall seasonal is worthy of mention in Philly, because it’s inside the "scrapple belt" – it’s called Beer for Breakfast. We started doing our breakfast stout, Chicory Stout, 22 years ago. Brewed it every year. To celebrate this year, we brewed kind of an everything-but-the-kitchen-sink version of a breakfast stout. In descending order of flavor-contributing ingredients, it has coffee, applewood smoked barley and local scrapple – we made a really lean pork scrapple and knife that into the mash tub so the beer has a lot of scrapple character and flavor to it, as well as coffee, chicory, maple syrup and applewood smoked barley. So that one won’t come out until late October, but it will be available here in Philly.