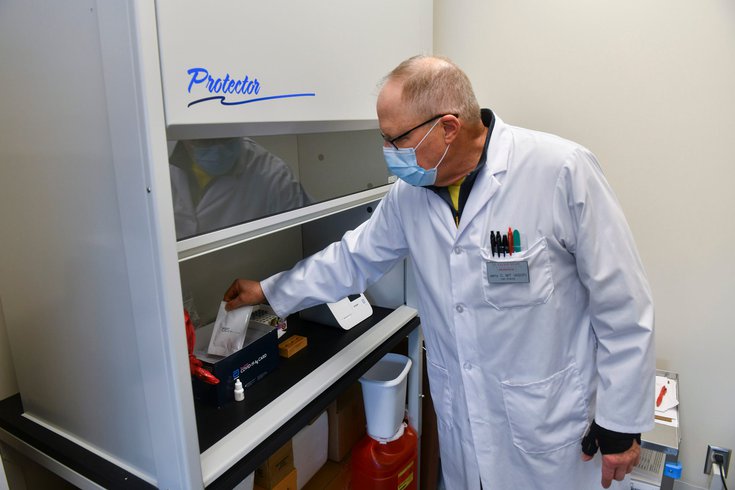 Because of a need for genome sequencing, testing for COVID-19 variants is still limited in the U.S. Above, Jerry Chrissman, a lab director at St. Cloud State University in Minnesota, talks about materials used in COVID-19 testing.

The U.S. Centers for Disease Control and Prevention is reviewing data that suggests the U.K. coronavirus variant actually may be deadlier than other variants.

A British report found the variant, B.1.1.7, is associated with a higher death rate when compared to other variants. But the United Kingdom's chief scientist, Patrick Vallance, has stressed to reporters that "the evidence is not yet strong."

"The CDC has reached out to U.K. officials and is reviewing their new mortality data associated with variant B.1.1.7," a CDC official told CNN.

Previous research has shown the variant is more contagious than previous forms of the coronavirus. But scientists did not believe it was more deadly as it began spreading in the U.K. last fall.

Several separate analyses from British researchers found that patients infected with the variant have a higher risk of both severe disease and death. This held true across patients of all ages.

The U.K. report acknowledged that these datasets from the London School of Hygiene & Tropical Medicine, Imperial College London, the University of Exeter and Public Health England have several limitations and that more research is needed to confirm these findings.

As of Monday, the U.K. variant has been detected in 22 U.S. states, including Pennsylvania and New Jersey, according to the CDC. Modeling data suggests that given the current trajectory, it could be the predominant variant in the United States by March.

To truly understand the impact this variant is having on the U.S., CDC officials say doctors need to compare the ways their patients with B.1.1.7 fare to their other COVID-19 patients. But this isn't a real feasible task right now, because the U.S. still has a limited ability to conduct the genomic sequencing needed to detect the variant.

Both Pfizer and Moderna have been testing their COVID-19 vaccines against emerging variants, including the U.K. variant. So far, the vaccines appear to still be protective against different variants, but research is ongoing.