These flowers smell like rotting flesh and can reach up to 10 feet tall, drawing crowds for their unusual shape and smell 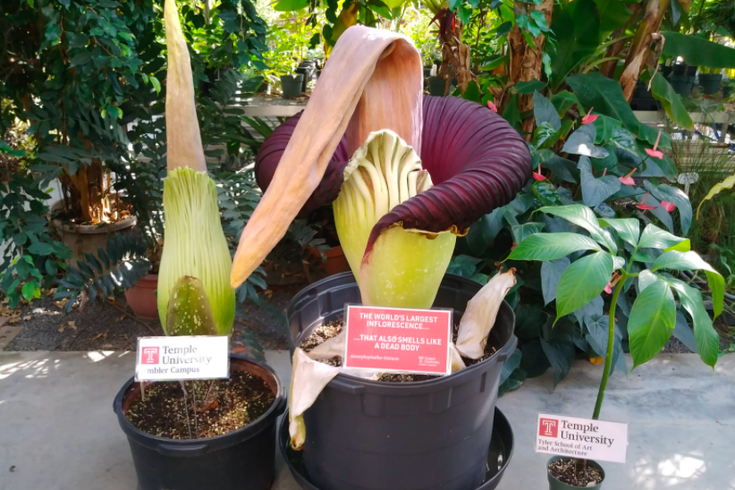 Two incredibly rare corpse flowers housed at Temple University are blooming. The first opened up on May 17, while the second smaller flower is set to bloom later this month.

Two ultra-rare corpse flowers that look and smell like death are blooming at the Temple University Ambler Campus Greenhouse for the first time at the university.

These flowers, also known as Amorphophallus titanum, only bloom once every seven to 10 years and last for just a few days, which draws crowds of people interested in seeing the unusual plant.

While most flowers have a sweet scent, the corpse flower gives off the smell of rotting flesh.

It is the largest "unbranched inflorescence" in the world and can grow to about seven feet tall with leaves spreading 12 feet wide and weighing 30 to 50 pounds, according to Temple. Last year, a corpse flower bloomed at the Longwood Gardens in Chester County.

Temple Ambler officials announced the larger of the two bulbs bloomed over the weekend and "has given its all," but the second flower is set to open up between May 24 and May 31 if you missed out.

"The stench, the speckled maroon and pink coloring, it is this flower’s way of attracting pollinators," said Benjamin Snyder, manager of the Tyler School of Art and Architecture's Greenhouse Education and Research Complex at Temple Ambler. "Rather than bees and butterflies, it attracts anything that would naturally be attracted to rotting meat, such as beetles and flies."

The flower is native to Sumatra and grows in a very small geographic region. They are an endangered species, Snyder said. Temple's two corpse flowers were gifted to the university from Ohio State University in 2017, which were grown from seeds collected from a pollinated plant there in 2013.

Snyder told Temple the reason the flower is so large is to help spread its unique scent through the humid jungle to attract pollinators.

If you can't make it out to the greenhouse later this month to see the second flower bloom, the university set up a live stream of the rare event.