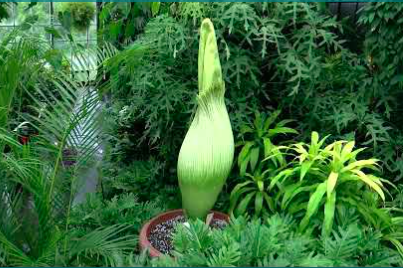 Sprout, the corpse flower at Longwood Gardens, will release a powerful, death-like stench when it blooms. The rare titan aram plant is native only to the rainforests of Sumatra, Indonesia.

If you love the smell of rotting meat, Longwood Gardens has a treat for you!

When these plants bloom, they release a putrid stench that aims to attract pollinators, such as dung beetles and carrion beetles, across long distances.

In the wild, these plants only grow in the equatorial rainforests of Sumatra, Indonesia, but they have been cultivated by various botanical gardens around the world. When fully mature, their inflorescence can reach 10 feet in height.

The plant at Longwood Gardens, affectionately named Sprout, was first started from a seed at the University of California, Berkeley in 2008. It was given to Longwood Gardens by the Chicago Botanic Garden after blooming there in April 2016. Its leaf was on display at Longwood Gardens for about a year before it went dormant and was placed in a growing house last fall.

Sprout was repotted in March and has been growing steadily since May, reaching about 64 inches in height. It is expected to bloom — at night — some time either this weekend or by the end of next weekend. A livestream of the plant has been posted online for viewers to enjoy. We'll update this story with a video of Sprout blooming when it is finished.

For those who feel a need to take in the cadaverous aroma in person, Longwood Gardens is selling tickets for advance purchase online. The bloom typically only lasts for 24-48 hours. Tickets are available with extended viewing hours on Friday and Saturday from 10 a.m. to 10 p.m.

When Sprout blooms, it will be the first time a corpse flower has done so at Longwood Gardens since April 14, 1961.