What's beneath our feet in Philadelphia? 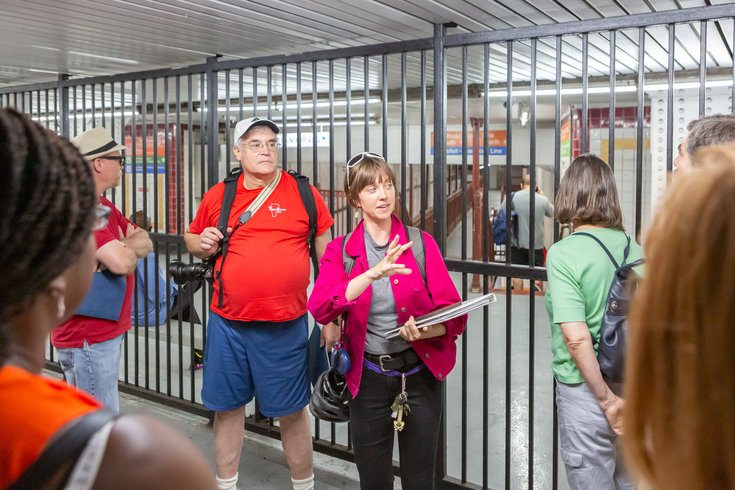 Jenna Beth Horton explains the history below many of Philadelphia's streets, and in this instance, below Philadelphia City Hall.

If you've ever wondered why there are three stops in five blocks along the Market-Frankford Line, the answer is shopping.

When Center City's major department stores – Strawbridge & Clothier, Lit Brothers, Snellenburg's and John Wanamaker – sprung up along Market Street, their owners wanted to get shoppers into the stores as quickly as possible from the proposed Market-Frankford subway line, so stops at 8 th, 11th and 13th Street were constructed. The stores then built underground entrances so shoppers then could exit the subway cars and walk right into the stores.

This was part of the beginning of the city's subterranean world, which has seen tunnels and concourses started, stopped, closed and revamped. A never-completed “Center City loop” was supposed to connect the area around City Hall. It's been shuttered for nearly a century, but recently a teenager entered it and took a photograph. He was, however, questioned by the FBI as a possible terrorist suspect.

On a brilliant sun-drenched Saturday, a dozen travelers signed up for a guided tour sponsored by Hidden City Philadelphia. They wanted to see how what was below ground influenced what was above ground. 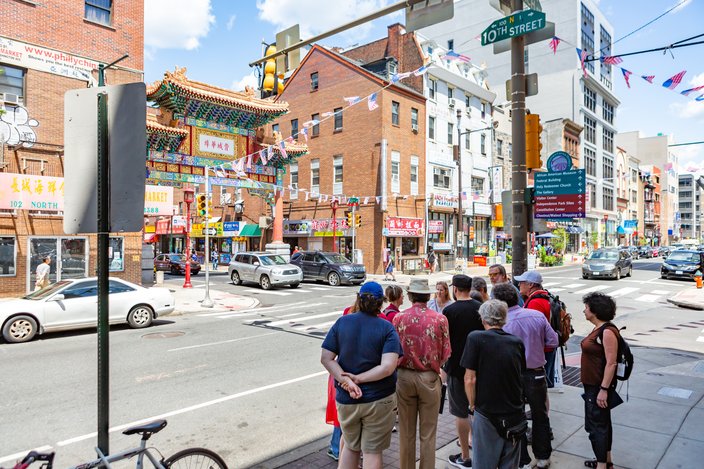 The tour stopped on street-level at 10th and Arch Street in the vicinity of the Arch Street Tunnel, which was part of the City Hall Loop. It was proposed and built, but never finished.

Titled “Subterranean Philly: What Lies Beneath...”, this sojourn started at 8th and Market Streets into what was the Lit Brothers store, and ended two plus hours and thousands of footsteps later in the lobby of “Philadelphia's best address,” 1234 Market Street. Along the way were stops at the Jefferson Train Station (part of the Center City Commuter Tunnel), the South Broad Street concourse, the Reading Terminal lobby and underground corridors that run parallel to the subway lines. Reportedly, it is possible to walk underground from 18th Street to 7th Street.

Hidden City Philadelphia conducts “off-beat” tours, such as where film director David Lynch frequented when he was a student at the Pennsylvania Academy of Fine Arts. Its web page describes the subterranean journey as “a miscellany of anything and everything that’s below the surface of Philadelphia, the tunnels and subway stations, basements, concourses, sewers and utility lines that form an underground city beneath our feet.” 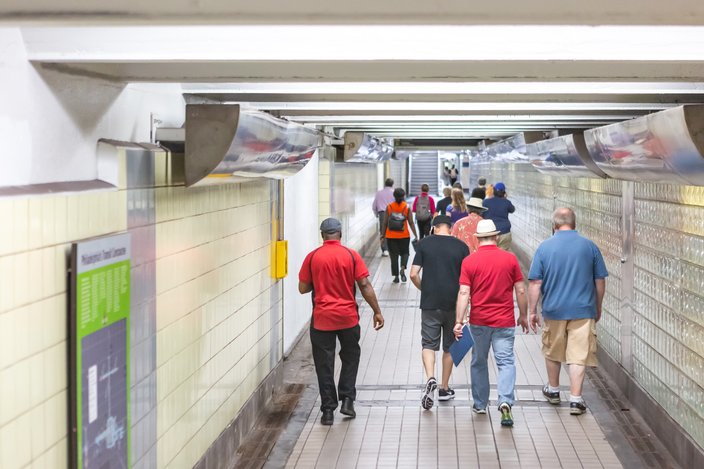 The tour lead through an underground concourse along Market Street.

Linsey Will had taken two previous historic tours. “It's fun to know the historic details, and it was the idea of seeing what was underground,” she said. “I like knowing Philadelphia history.”

One of the most interesting parts of the tour, Will said, was the “enormous underground concourse (called the South Broad Concourse) that nobody knows what to do with; maybe make it a roller skating rink?” She thought it was a “tantalizing” tidbit that City Hall was built on a foundation of sand.

The tour was led by 34-year old Jenna Horton, who described the journey as an opportunity to “consider the change this transportation corridor has undergone since the first subway was built around 1907, 1908. We're in the midst of probably the third huge chapter of the city attempting to reinvent this corridor on a massive scale.”

At the outset, she told the participants every stop on the tour was a “public space,” where people gather and walk. There were no visits to abandoned train stations or stops in hidden corridors or basements. She has conducted the tour 13 times, and thinks there are several reasons why people are drawn to what's underground. 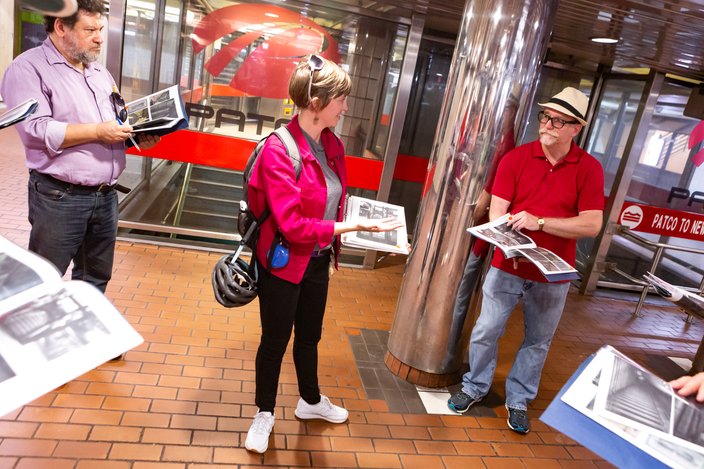 Horton used binders filled with historic photos as a tool to show how the areas toured were used throughout history.

“At its core, I think it's psychological,"  Horton said. "For ages, the underground has been associated with hell, the dead, the absence of breathable air or light; there's some fundamental risk to it, and that brings excitement

“Secondly, speaking to our ability to build and construct underground, there is the sheer awe involved. In the same way that skyscrapers – or in the past, churches-- speak to a kind of human ability or ego, I think the subway is not so dissimilar, although probably much less celebrated. The fact that humans actually accomplished to dig and create coherent structures underground inspires a sense of accomplishment, and came at the cost of many deaths.

“Lastly, the underground offers parallel world to what's going on above ground: over 3,000 miles of sewer pipes run beneath the city, not to mention the subway or other utilities," Horton said.

She said there are three chapters in the city's history that melded commerce and transportation.

The first was the construction of the Broad Street Subway and the Market-Frankford line. The second was the building of the Gallery and Gallery II at 9th and Market Streets in the late 1970s and early 1980s. The third stage is under way (at a estimated cost of about $400 million), the so-called “Fashion District” on the site of the Gallery malls. Each of these projects had or will have a huge impact of the life of the city, from recreational to economic to societal changes in the way city residents lived, worked and played. 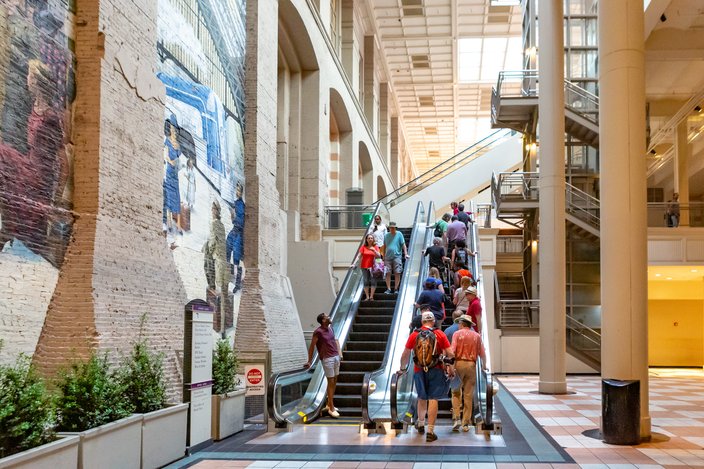 The tour ascends an escalator from an area of The Gallery, which is currently under construction, through the former Reading Terminal train shed near Market Street.

The middle chunk of the tour is what remains of the Gallery at Market East – a map on a wall with a “you are here” is nearly all that remains of what was once the country's largest urban mall. There's also a Cinnabon shop (open) and a bank (closed). Horton says the space changes every week from the construction: the interior disappears one week, the next (week) the skylight is covered with a tarp, the following time the ceiling and lighting is gutted, and then a new, unpainted ceiling installed.

Walking along the corridor parallel to the subway below Market Street, you can see the remnants of those department stores in the boarded up and blackened windows, which once displayed fine clothing and accessories. The metal trim around each window is tinted green from exposure to the air, another reminder of how the city shopped a century ago.

At 9th and Filbert Streets, the tour moved above ground to point out certain colors painted in straight lines on the street near the corner: the colors indicate what else was below ground, as tunnels and stations have to share what's beneath the streets with modern amenities: A yellow line meant there were steam and gas pipes; green meant a sewer line; red meant electrical lines, orange signified communications, and blue mean water lines.

Another site on the tour was City Hall, where all paths seem to intersect. From the station on the Broad Street Line, to underground entrances at nearby buildings, the labyrinth now leads to the revitalized above-ground Dilworth Plaza around City Hall, featuring huge canopies above the exits and entrances. 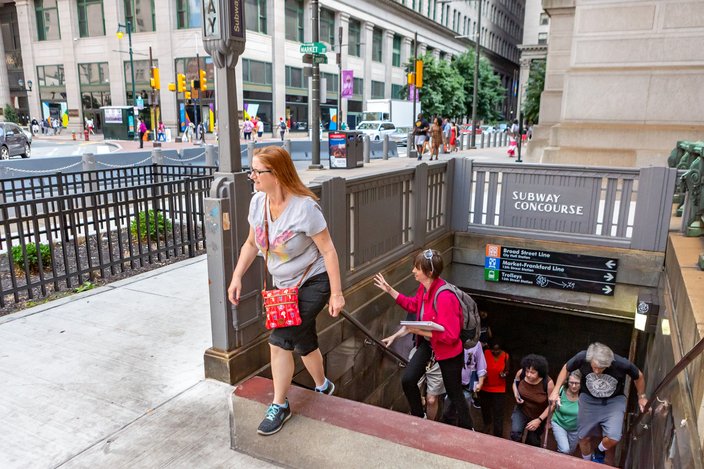 The tour emerged from the underground concourse on the East side of Philadelphia City Hall.

The “newest” section of subterranean Center City is the revamped South Penn Square, which at first glance appears to be the opposite of what it means to be below the surface: it's brightly lit, there's music piped in, some of the walls have artworks. The square also connects to the Market-Frankford line.

When not conducting the tours, Horton is an actress and performance artist by trade. “I credit a lot of my skill sets as a person and as a guide to this training. Public speaking, empathy, curiosity, relationship to story, ability to project and hold people's attention. I've also done a lot of roving performance in the streets or unconventional spaces,” she said.