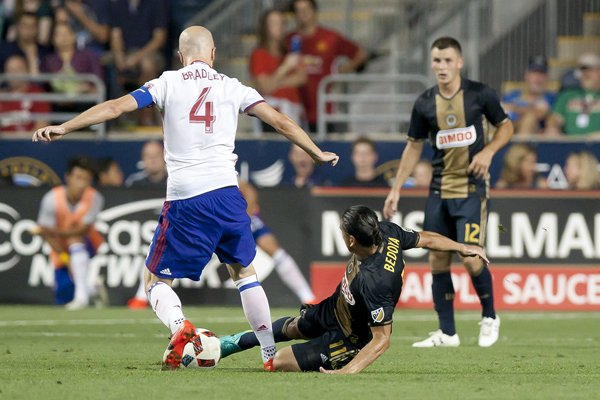 Alejandro Bedoya will wear the captain's armband for the Union in 2017.

Pretend for a moment that you're a Europe-based soccer player who's moving to MLS in the summer.

You leave your team after finishing a nine-month season, join a new club in the middle of their season, and try to adapt to new teammates and a new league without any true time off.

That's basically what Alejandro Bedoya went through last summer when he swapped Nantes for the Philadelphia Union in August. You saw flashes of quality from the United States international midfielder, but you also saw a player that was trying to adjust to new surroundings on the fly.

"If you ask anybody around here, I'm definitely more fit than when I came in last season," Bedoya told reporters this week. "I've looked sharper in training and I've just felt better overall. I've been buzzing around the field, so that feels good. Last year, I came in, we played the first game in New England, and we killed them 4-0. I was like, 'Oh, this isn't too shabby.' But when the competition ramped up a little bit more, then definitely around the 70th minute I was dying. It's definitely good to have a whole preseason and get to know the guys a little bit more."

The real question for 2017 is where the Union captain will actually play on the field. He deployed as a number eight last year, but we've seen him play a bit of number ten during this preseason.

Similarly, he's a Swiss-army knife for the United States national team, playing as a midfielder in areas both central and wide. Bedoya has always done a lot of things well, and he grins when asked about his preferred position on the field.

"That's the one-million dollar question (laughs). I really don't (have a preference)," Bedoya explained. "I think I feel more comfortable being a number eight, where my engine allows me to go back and forth, find space, and kind of roam. But I'll do whatever it takes to try to do my best for the team and help the team out the best that I can. Right now, I still don't know what position I'm going to play in the opener. I'm sure we'll work on some more things in training, but we'll see how I start the season."

If Bedoya plays the ten, then you'll probably see Derrick Jones as a number eight.

But if Bedoya plays the eight, you'll see him paired with Haris Medunjanin, the Bosnian midfielder who head coach Jim Curtin asked Bedoya to share a hotel room with during preseason training in Florida.

"Right from the get-go, even just rooming with him the first day and talking with him, we kind of hit it off," said Bedoya of Medunjanin. "You just find somebody with that connection that kind of understands and sees the game the same way you do, and you sort of just click. You saw it in a couple games in the preseason - well, the first one - when I played right next to him when he played like the six and I played like an eight. We were always looking for each other. He's not afraid to thread the needle and he's got a great left foot. I'm sure you guys have seen it. His vision is great; he has great technique. I'm looking forward to playing alongside him. I think Philly fans will be excited to have him."

Bedoya admits that expectations are higher this season, which he describes as a good thing.

He's also been honest and pugilistic with the media, which I find refreshing in a world of canned quotes and talking points.

We had the following exchange this week alongside Philadelphia Inquirer reporter Marc Narducci.

Philly Voice: What do you think this team can do this year?

Bedoya: "I don't know, what are your guys' expectations?"

Bedoya: "I'll let you know if it's reasonable or not."

Philly Voice: Well, realistically, if you're looking at sixth place last year, is that a benchmark for this year?

Bedoya: "I think it's a benchmark, yea, to be better than sixth place. I think that's reasonable. I think we know, that down the stretch last year, we weren't good enough and we weren't able to close out games. I remember, instinctively, the game against Montreal here, we were up 2 to 1 and kind of were the better team, then we let a set piece in the last minute go in. We just have to be sharper in situations like that. But I think, for sure, the benchmark has to be better than sixth place, to get in the playoffs again and get a win in the playoffs. I want to do that for Philly. That's what I came here for. I like that the people here have been ambitious and that's what I'm all about. We want to challenge ourselves and hope to surprise some people in the playoffs."

Alejandro Bedoya on expectations for 2017 - https://t.co/NujmHM9kms