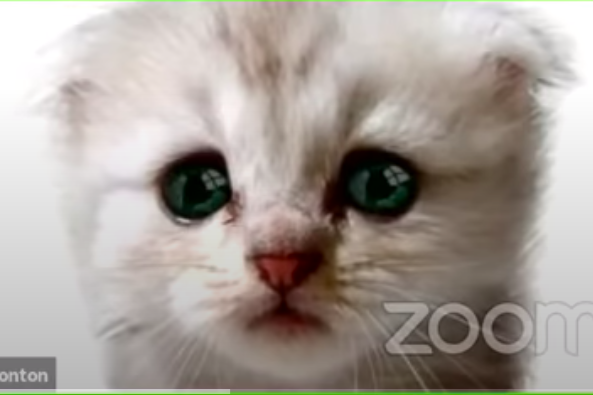 Lawyer Rod Ponton says he has no idea how a hilarious cat filter covered his face during a court hearing held over Zoom Tuesday.

Texas lawyer Rod Ponton encountered some technical difficulties as he was attending a virtual court hearing held via Zoom earlier this week.

After the court attorney logged onto the video call, he realized he couldn't turn off a filter that made him look like a white cat with large, tear-filled eyes.

"Mr. Ponton, I believe you have a filter turned on in the video settings," Judge Roy Ferguson said.

The video was posted to the court's YouTube channel Tuesday and blew up, getting more than 7 million views and thousands of comments. Many viewers wondered how to get the effect on their own Zoom calls.

"Somehow, when I got called into court, I miraculously transformed into a cat," he said.

The cat filter is not built into Zoom or within Snap Camera, which creates filters or 'lenses' similar to the cat feature for video calls.

Instead, Ponton's filter mishap was caused by Live! Cam Avatar, a tool from an old software program called Dell Webcam Manager. Ponton was using his secretary's old Dell desktop computer, which had the software.

How to use Zoom's cat filter on your next video call

The filter can be downloaded onto a Zoom user's PC, but it doesn't work with Mac operating systems.

Still, Live! Cam Avatar doesn't appear to allow people to directly use the cat avatar on live streams, according to CNN. Instead, they can record videos of themselves using the cat filter or share their screens while during video calls.

Ponton told CNN he can't find the cat filter on the computer anymore and doesn't know how to recreate the viral mistake.

But there's still hope — Zoom has other basic filters accessible under "Preferences" that come close to replicating the cat filter, the Washington Post reported. Users who select "Backgrounds & Filters" and then click "Video Filters" will see an assortment of filters and stickers to try out.

There is no cat Zoom filter, but there is a "Lioness" that gives the user a snout and ears.

There are some close cat replicas on Snap Camera. Users can download the application to try it out. To access it on Zoom, click "Settings" and then "Video." Under "Camera," users should click the down-facing caret. Then, Snap Camera should come up.

From there, users can choose several filters from Snap Camera. Those filters can be used in video calls through Skype, Google Meet and Microsoft Teams, too.