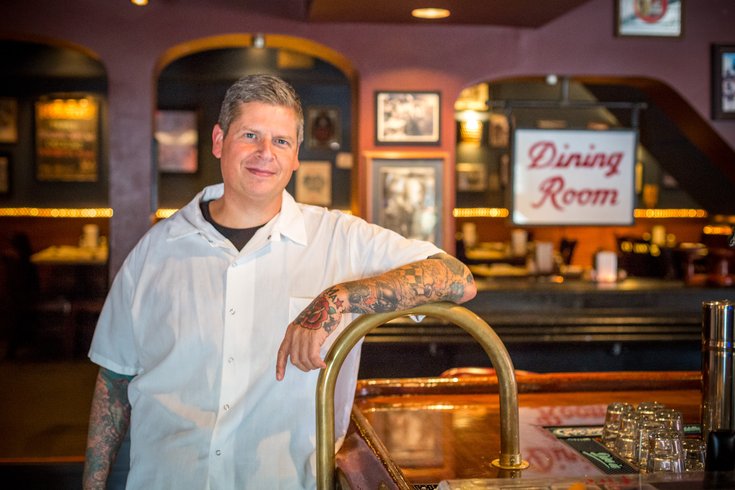 Chef Mark McKinney at Triangle Tavern. His vegan creations have earned him some fans at non-vegan hotspots, including the Khyber Pass Pub and the Cantina.

When Triangle Tavern reopened its doors last year, owners Dave Frank and Stephen Simons did everything in their power to preserve the vintage South Philly vibes of the longtime local. Black and white photos line the walls, house wines are available by the carafe and paper menus line the tables.

Upon first glance, that menu reads like any red sauce joint — fried calamari, mussels, eggplant parm. But Triangle is not your grandparents’ Italian restaurant.

Thanks to chef Mark McKinney, it’s a low-key vegan mecca.

With nearly 20 years of meat- and dairy-free living under his belt, McKinney oversees all of Frank and Simons’ restaurants, including Triangle Tavern, Royal Tavern, Khyber Pass Pub and both Cantina locations. And while none of these restaurants bill themselves as veg destinations, the Philadelphia vegan community knows there are always going to be creative options on the menu — like the vegan fried chicken po'boys at Khyber and the tempeh club sandwich at Royal — at all of these spots thanks to McKinney.

His most recent vegan innovation, mushroom scrapple, might be his most inspired yet. 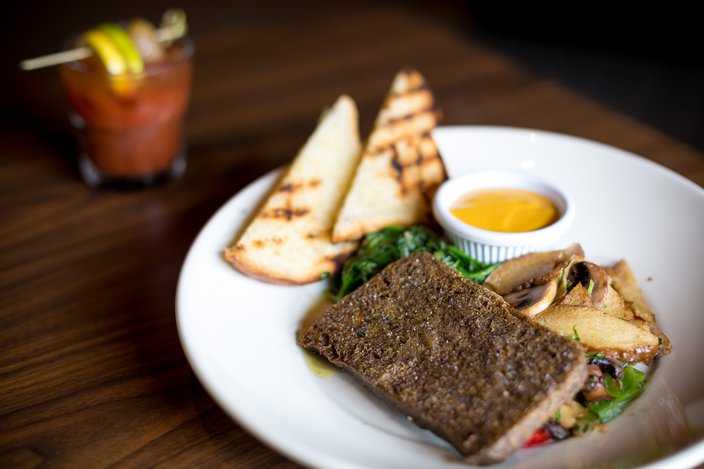 “I grew up in Delaware, and my father ate scrapple all of the time,” McKinney says. “We wanted to update it and make it healthier so that I can gorge on it when I feel the need.”

The result isn’t all that far off from the classic Pennsylvania Dutch recipe, cornmeal and spices with slow-simmered and pureed mushrooms subbing in for the pork trimmings.

Poured into loaf molds, sliced, dredged in flour and fried to order, the vegan scrapple is on the brunch menu as a side or as part of a serious breakfast plate. Served with tofu scramble, sautéed spinach, vegan Cheez Whiz and fried potatoes, McKinney thinks of this lineup as the Triangle’s version of a classic diner breakfast.

“The vegan scrapple outsells everything on the menu,” he says.

Even the good old-fashioned pork scrapple?

“We’ve barely been able to sell it at all! We found out recently that it sells if we put it on pizza. We do breakfast pizza with baked eggs and pieces of fried scrapple. But … a scrapple sandwich on white toast — you think would sell, but no.”

McKinney estimates that 40 percent of the Triangle’s clientele is vegan or vegetarian, and with meat-free meatballs, roast beef sandwiches and cheesesteaks on the menu, it’s not all that surprising.

“We all grew up on Mom’s meatballs,” says McKinney, who is well aware of the kind of red-sauce comfort that the menu at the Triangle provides. “We’re trusted in the Philly scene. Even though we’re not a vegan restaurant, we’ve been doing it for so long, people know that they can come here and get vegan food that’s really vegan food.” 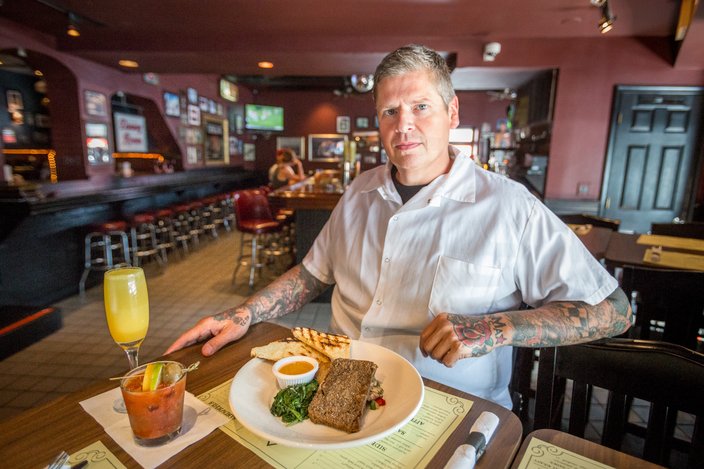 Chef Mark McKinney and his creation, at Triangle Tavern.