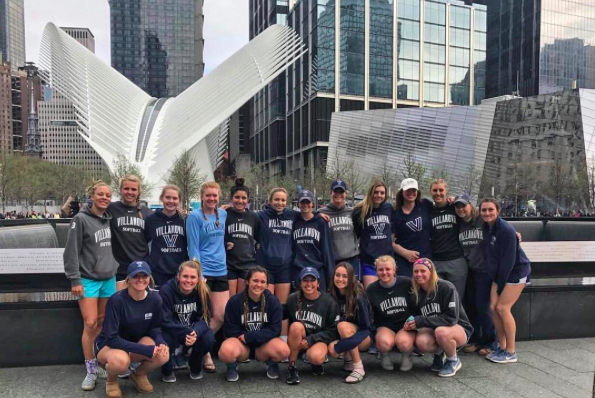 A student at Villanova University is speaking out against a photo posted on Instagram by the school's softball team, arguing that it was inappropriate for the student-athletes to use the 9/11 memorial in New York City as a promotional backdrop on social media.

The university's best-known fan account, "novanationer," last week posted a photo of the softball team outside the National September 11 Memorial & Museum, which opened in 2011 on the tenth anniversary of the deadly terrorist attack on the World Trade Center and the Pentagon.

In the photo, the team is pictured in front of a commemorative sculpture and does not appear to be making any particular statement about the 9/11 attacks. At the end of the post, the account includes the hashtags #VUFanGram and #NovaNation.

Last week, in a letter to the editor of The Villanovan, the school's student-run newspaper, student Caitlin Ramirez wrote that the post was an affront to the university's values.

I feel as though this photograph can easily be misinterpreted as something that does not accurately represent the Villanova community, our beliefs and our values. I am fully aware that the softball team probably did not realize how it might look to use a hashtag like #VUFanGram in connection with the 9/11 memorial ... 9/11 is still a very real event that lives on in my community."

Ramirez adds that the intent of her letter was not to "admonish the Villanova softball team" but to open up a conversation about whether there might have been a more respectful way to commemorate the visit.

Etiquette surrounding photographs at memorials has increasingly become a topic of debate and contention in the age of social media. Earlier this year, Israeli artist Shahak Shapira released a series of altered selfies entitled "Yolocaust" as a critique of tourists who posed for photos at Berlin's Memorial to the Murdered Jews of Europe, where thousands of concrete slabs fill a large downtown plaza.

Shahak took the selfies and transposed them over images of the suffering and brutality inflicted on the victims of the Holocaust in European concentration camps.

At issue, for both Ramirez and Shahak, is the belief among many that the memorials represent gravestones to the descendants of those were impacted by these devastating historical events. The September 11 attacks killed 2,977 people, wounded more than 6,000 and left many with debilitating chronic illnesses.

The National September 11 Memorial & Museum has been a source of controversy and internet intrigue on a few occasions since its opening.

In 2014, when the museum opened after a long delay and disagreement over the possibility of a "Ground Zero Mosque," families of some victims expressed outrage about the museum's $24 admission fee and pricey gift shop.

Last September, as the nation marked the 15th anniversary of the attacks, another viral photo appeared to show a supernatural silhouette atop the Tribute in Light at the World Trade Center. Some commenters accused the photographer of altering the image, while others praised him for capturing a seemingly special moment.

The novanationer Instagram account and other social media accounts connected to the Villanova women's softball team did not offer a public response to letter posted at The Villanovan.