Reigning champion Villanova kicks off its bid for a second-straight NCAA Tournament title on Thursday evening against play-in winner Mount Saint Mary's, which beat New Orleans in Dayton on Tuesday night to earn a date against the field's top-ranked team.

A No. 1 seed has never lost to a 16-seed, and almost no one sees that happening to the Wildcats this year. Of the nearly 20 million brackets filled out on ESPN.com, 97.8 percent of them have 'Nova advancing to the Round of 32 (and 89 percent see them advancing to the Elite Eight despite a potentially rough road out of the East).

Before they can even start thinking about next weekend in Madison Square Garden, Jay Wright's team will need to advance out of Buffalo. And that begins against The Mount.

Here's what you need to know about Villanova's opening game, where to watch it, and how we see it playing out.

This is normally where we'd put predictions from other outlets, but since every analyst prediction I saw had 'Nova advancing, we'll skip that for this game and move right on to our own predictions.

I truly believe that a 16 seed is going to beat a 1 at some point. Michigan State might have been the tourney favorite last year, and it was upset in the first round by Middle Tennessee State. It’s going to happen.

I’m just not predicting that it will be Thursday night in Buffalo.

Villanova was bounced in this same building in the second round of the 2014 NCAA Tournament, and I think that same scenario is on the table this time around. But Mount St. Mary’s, which eked out a win over New Orleans in Dayton on Tuesday, should be severely outmanned by the Wildcats. Jay Wright’s team struggles with size and depth, but 6’8” Chris Wray is The Mount’s only starter over 6’5”. Speaking of height, 5’5” Junior Robinson is pretty fun to watch:

What Mount St Mary’s has going for itself is that it played a tough nonconference schedule. Unfortunately, the Mountaineers didn’t really win any of those games: 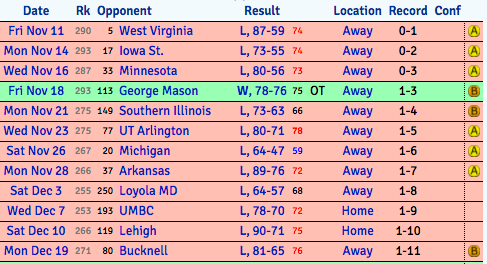 Look for Josh Hart and Jalen Brunson to get into the lane at will, and I have a feeling Kris Jenkins is going to bounce back from beyond the arc after a subpar Big East Tournament.

Mount St. Mary's isn't a great scoring team, and in its three losses against ranked teams (West Virginia, Michigan and Iowa State) the Mountaineers averaged under 54 points per game. That's not going to get it done against a Villanova team that averages close to 80 points per game – and is capable of scoring well over that.

As a 2-seed last year, Villanova rolled past UNC-Asheville without much of a problem – I mean, the Wildcats won by 30 points. That was pretty much the status-quo last year for the team, which won four of six last year by 19 or more points. And Villanova may be better this year.

I guess I should include some analysis, so here goes:

Villanova is a lot better than Mount St. Mary's and that's why it will win.